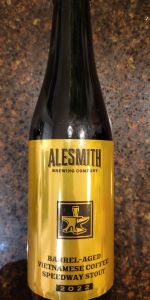 Notes: We traditionally brew Vietnamese coffee, known as cà phê sữa đá, with a phin-style filter that gently percolates water through ground coffee. The result is a chocolaty and bold tasting coffee that perfectly complements the notes of oak, vanilla, and bourbon in this massive barrel-aged stout.
View: Beers | Place Reviews
Reviews: 109 | Ratings: 952 | Log in to view all ratings and sort

Had a cellared bottle. Been hunting this one for awhile, and it did not disappoint! Smell has rich bourbon barrel character that compliments all flavors. The booze, wood, coffee, chocolate, slight vanilla, licorice, leather and charcoal in the smell. Taste is much the same, woven together in rich creamy layers. Add some earthiness, dark fruit, and molasses, and notice the depth of the coffee flavors, and the taste is complete. Feel is creamy, super rich, the right amount of booziness, and chewy.

Tasted from bottle. Pours black with tan head. Huge coffee aroma with some bourbon. Taste is thick and chewy. No booziness to it. Flavors of caramel, molasses, coffee, cocoa, bourbon. Dangerously drinkable.

2014 bottle poured into a KBBS teku on 3-16-19. I'm thankful that this aged so well. I'm sure the coffee flavor has subsided a little from its original flavor, but to me that is a positive. This beer is excellent.

2016 bottle - wish I would have drank it fresh. It’s not bad, but there’s very little on the seeet side to balance out a pretty intense coffee flavor.

Checks all the boxes, but sadly there are comparable beers I can grab on the shelf.

Pours black with a finger and a half of khaki foam. Head retention is good. Aroma is sweet bourbon over medium-roast, medium-bodied coffee. Toffee and molasses each add a little sweetness, with hearty roasty and toasty malts forming the base. It's all led by sweet bourbon. Flavor profile is bourbon, chocolate, molasses, toffee and medium-roast coffee, with roasty and toasty malts. There is a kiss of char at the back, but otherwise, the heat from the alcohol and bourbon are low. Mouth feel is thick with a velvety texture that is broken up by a hot, grainy texture. Overall, a huge and superb stout wedded with notable bourbon and flavorful coffee.

Traded in NC for a bottle. No visible date

Look- Poured into a tulip. A thin brownish-tan head which faded quickly. The little lacing and some stickiness in places.

Smell- Lots of caramel, chocolate, and vanilla. I was expecting more coffee and the barrel, but it just was not there. The smell was fantastic either way.

Taste- The caramel, chocolate, and vanilla blend was phenomenal. The bourbon was a little more prevalent as it warmed and the coffee showed up more toward the end of the pour.

Mouthfeel- Nice and smooth with just enough carbonation. No idea this one clocked in at 12%.

Overall- A fantastic stout with a rich blend. Highly recommend.

03/2017 - dig the vanilla, fruity aromas that dominate up front, plus some coffee; the palate is chock full of nice barrel, plus some more vanilla, coffee, and dark chocolate; the body is quite enjoyable, but the finish is a bit tannic amidst all those other great qualities.

Extremely amazing beer.
Smell of caramel
Taste of chocolate and coffee
Overall very drinkable for a 12% ABV. Coffee everpresent, but not overpowering.

Received in a trade and shared with JLindros. 2016 vintage.

A - Poured into a Kate the Great tulip a nice dark black hue with a fat mocha head that fades to leave a creamy blanket and and light lacing.

O - Overall this was a very very good stout. Excellent chocolate and bourbon notes, unfortunately the coffee is super faint due to the age. Still, delicious!

Another big thanks to rudzud, 2016

Nose loads of dark chocolate and coffee, earthy caramel like coffee, a bit sweet caramel toffee, with nice nougat chocolate fudge, nice mild earthy coffee and chocolate coffee notes, but loads of the base beer, dark chocolate, some roast, loads of vanilla and vanilla ice cream, baker's chocolate cocoa with a little generic back end fresh coffee, little caramel and vanilla toasted oak barrel, flashes of coconut barrel too, and a bit of sweet bourbon, great beer but coffee is lighter than it should be, probably age

Overall again awesome but missing a bit of the base Vietnamese coffee, great barrel, great base beer, great everything just missing some of the base coffee

Black color with brownish head. Aroma is a bit spicy with chocolate notes, bourbon and some booze. Taste has roasted malt, chocolate, coffee, bourbon in the background. Medium plus body with soft carbonation. Overall it's a really nice, well rounded imperial coffee stout.

Had a pour at Dark Lord day and it was pretty good. Not long before I had BA abraxis and BA darkness, both were better. To me this beer should not be ranked this high

Had at a bottleshare. Wish I knew who brought it, so I could thank them. It was a standout among greats. Thick, rich, black blood of the Earth. Thanks whoever!

Rich, smooth texture. Slight but not overpowering bourbon scent and taste. Not so boozy as to take away from the stout richness. Great chocolate left on the back.

The beer pours a blackish brown color with pretty good head retention and lacing. The beer looks rich and viscous, which it ain't no bad thing. On the nose, there is considerable coffee and vanilla, along with underlying dark chocolate and perhaps a hint of cinnamon. The flavor profile replicates the nose pretty closely, and while this stout is pretty sweet, the coffee flavor seems to balance and counter that sweetness somewhat. There's a mocha quality on the palate of this beer that I just love. Mouthfeel is full, soft and fairly creamy, with a very long finish. Alcohol is incredibly well integrated into the flavor profile, and so drinkability is terrific (almost too terrific, as it's hard to show restraint where this beer is concerned).

Just outstanding, and a beer I order and even make a special trip to obtain, whenever I see it on tap around Portland.

This was my unicorn beer for a long time, I probably had unrealistic expectations going into this, but for me, while a very good beer, it did not live up to the hype or the price

I have no idea why but this tastes like a lightly toasted Marshmallow. So good and so not what I expected it to taste like. A must have beer for any stout lover and worthy of its acclaim.

Viscous black under a mocha blanket that settles to a thick collar.

The distinct aroma of roasted, waxy walnuts hits me first, which is quickly enveloped by decadence: chocolate, peanut butter fudge, and pie crust. Then wet, dark wood and a touch of wafer mix in.

The first sip starts sticky with flavors of vanilla rum on the lips, transitioning to nutty chocolate fudge and syrup on the palate. Brittle toffee and deep luscious mocha are spiked with measured bourbon that provides sophisticated notes of smoke and char.

The heat is smooth and round through a slick body and a semi-dry finish.

Black with off white foam.

Coffee curbs the heat from the alcohol but not quite enough. Mix of earthy and sweet, the later from vanilla and booze as I can't pick out chocolate. Apparent alcohol's not always a turn off but this doesn't strike the right balance for me.

Look is black
Smell is figgy with coco and coffee coming through
Taste is amazing! Nuttiness, slight tart, and tons of coco and coffee. The bourbon comes through with the perfect balance
Overall, amazing beer

Just like cold brew with lots of chocolate and vanilla. Mouth feel is silky and substantial. Excellent barrel character with toffee and butterscotch without the alcohol burn. No bitterness from the coffee. Easy drinking and we'll worth seeking out.

A sexy beast. Poured pitch black; not much different then their other stouts. The aroma is outstanding. All coffee - it contributes strong notes of hazelnuts. There is trace notes of bourbon which adds the complexity to the coffee. Smells sweet and dessert-like, like Tirimisu. Upon sipping, the coffee is exactly like the aroma. Full-blown hazelnuts with trace bourbon. I admit I never tasted coffee like this in any other stouts. The coffee adds so much flavor yet I appreciate its simplicity as the hazelnuts are so easy to pick up. Mouthfeel is full-bodied and rich. Outstanding beer, well crafted!

Benish from Wisconsin, May 07, 2017
Speedway Stout - Vietnamese Coffee - Bourbon-Barrel Aged from AleSmith Brewing Company
Beer rating: 100 out of 100 with 952 ratings