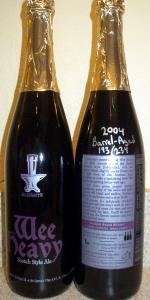 Like the port barrel-aged version I had recently, my inclination is that this is a 2016 bottle based on the mixed case that this was included in. A sweet, syrupy wee heavy kicked up a notch with that smoky, buttery, bourbon flavor. Seems a bit past it’s prime as it is quite mellow, but delicious nonetheless.

A: Deep mahogany brown color. Thin beige head settles out rather quickly and leaves no lacing. Not unusual for barrel aged beers.

S: Sweet corny bourbon up front, though there is no alcohol kick. Soft oak. Loads of malt depth. Brown bread and crust, fig, raisin, caramel, candied nuts. Touch of black cocoa. Subtle undertones of sherry and paper are beginning to develop, but aren't yet too noticeable.

T: As in the nose, the bourbon is up front on the attack, but not hot whatsoever. Corny-sweet, with an oaky vanilla backing (which is augmented as the beer warms) and kiss of barrel char. From there, deeply complex malt flavors blossom. Rich caramel, toffee, and treacle syrup. Cola. Faint smoke. Brown bread and toasty bread crust. Fig and golden raisin. Somewhat of a tootsie roll/fudgey note. Evidence of oxidation is super subtle, but there is a bit of sherry. Faint whisper of alcohol. Drying crusty finish with some lingering chocolate covered raisin and a bit of oak tannin.

M: Very heavy, thick, and rich. Full-bodied with a sense of pressing weight. Rife with residual sugars, but it stops barely short of being syrupy. Carbonation is moderate, and pricks a little at the tip of the tongue. Wonderful coating, silky, and pressing malt texture.

O: I live for beer like this. The malt complexity is so deep, layered, and nuanced, and the barrel flavor profile fits like a glove. Everyone loves to chuck an imperial stout into a bourbon barrel -and that's great- but I've always thought that scotch ales were sneakily the best beer to bourbon barrel age. Case in point right here. This beer is an all-time great as far as I'm concerned.

750mL (vintage 2013 based on my notes) into a tulip. Pours a deep dark mahogany brown w/ a 1/2-finger head that settles to a narrow beige collar. Looks dense and chewy in my glass.

Aroma is rich and complex. Bourbon, vanilla, rum-soaked pipe tobacco, toffee, dates and figs. Pretty much what one would expect from a bourbon barrel aged scotch ale/wee heavy, old ale, or English barleywine (all of which are pretty close together in my mind). Surprising how many notes are readily apparent while this is still fridge-cold, and I look forward to observing some changes as it warms.

Mouthfeel is chewy and and the heavy side of medium. Lingers on the palate.

Overall a really outstanding scotch ale/wee heavy. Better than I'd expected for some reason.

My reference point for a bourbon barrel-aged wee heavy or scotch ale is Central Waters' annual release, which I've had a couple cases of over the past few years. This is better in every way but the price. Rich, decadent, bursting with barrel oak and whisky booze, but without overwhelming the malt, vanilla, and floral hop character of the base beer. Fabulous, likely my new favorite for the style, but not one I can find readily or indulge in regularly.

This right here is awesome in a bottle, folks. Perfectly malty, and roasty with caramel notes and the beautiful barrel flavor that adds another layer of richness. This one is a sipper; its rich and boozy and will cot your stomach in warmth while simultaneously putting a smile on your face. Everything a BA Scotch Ale should be

Doops broke these out on a rainy Tuesday evening. Thanks to The Man for forgetting these at his house and never asking about them again about a year ago.

APPEARANCE: Pours out flat. Some bubbly stuff, but basically flat. Hazy maroon red with no carbonation evident. Ends flat with no ring or lacing. Oddly enough the ’05 had a small hint of carbonation in there somewhere.

SMELL: Still piles of bourbon on this one. Oak, caramel, toffee, vanilla and butterscotch round off a very barrel heavy, sweet malt nose. The ’05 was identical.

TASTE: Oak, bourbon, red fruits and caramel sweetness up front. More sweet candy and booze at the swallow with a bold and lingering finish of caramel and toffee sweetness, bourbon, oak, vanilla and alcohol. No oxidization here, and the ’05, luckily followed suit.

PALATE: Fuller body, silky and slick, with no carbonation. Goes down slick with a bit of a scratch at the swallow and finishes mouth-coating.

OVERALL: Good stuff all around. Both of these have held up nicely, and while I’d prefer to see at least some carbonation in there, the lack thereof isn’t really an issue. Lots of sweet malt character and a bold, enjoyable barrel component to go along with it. Really glad to have tried these oldies. Thanks again, gents!