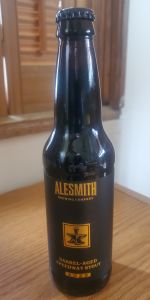 Decided to crack this bottle while barbequing some chicken one fine day. Why? Because I can. Just like the dog. Pulling this out of my cellar brought back fond memories of the release day: scoring 6 bottles, cracking a piss warm westy12 with friends, sluggin Pliny and Blind Pig out the bottle, mowing grub at Stone... good times!!!

Now some people feel that they can sufficiently review a beer after a 2oz taster. Not Daddy. That's why 750ml of BA Speedway and I are about to have a serious discussion on the nature of the multiverse. While barbequing chicken.

Agressive pour creates a monstrous Del Taco chihuahua fur colored head. That settles at a moderately quick pace to a thin film on top of an open tar pit.

BIG whoof of the barrel. Alcohol, dark fruits and... maybe some bitter chocolate or cocoa. Nutty even. And some more whiskey like aromas.

I was afraid there would be too much booze in the taste (possible?), but it's mostly in the nose. Taste is a big bite of dry cocoa. Then maybe some chocolate and coffee. And some booze. Then some prunes. Ahh, prunes.

So very smooth through the mouth. I catch a bubble or two of carbonation in the back of the throat, but the alcohol bitch slaps it around and calls it Susan. Everybody ends up fat, dumb, and happy. Not quite as thick as expected. Not that it's thin by any means, but it's not 30wt. Goes down like melted butter. Big ass beer here - no joke.

The missus takes her customary 4oz taster (still breastfeeding) then dumps over half back into my glass (too strong!). YES!!! Where does that leave Daddy? Well, shitfaced to be candid. If this is my last review, it's because this big ass beer kicked my ass and I died. Smart money is on me though!

Smooth! Two-thirds of a bottle down and I'm losing motor skills. Rolling the chicken instead of flipping. Hope I can read these notes when I go to type the review. Same 12% as the regular Speedway, but the bourbon flavor makes it seem like more. Like 12.2% maybe. Good thing I've spent the last 15 years in high alcohol altitude training.

Above from notes. The outcome: I'm still here, she's all gone. Good times.

thanks to drlovemd87 for sharing another treasure from his cellar. this one is special, and is perhaps the most well integrated use of barrel out there right now. the bourbon doesn't overpower the grain or the coffee, and all the elements are there together, its lovely. just a little froth on top of a jet black viscous base, intimidating in the glass. the nose is heavy vanilla, fresh coffee grounds, and warming alcohol. dried fruit, raisin maybe, and oak are there too, as is a rather dry earthen roasty character. the flavor isn't dry at all though, its sweet all the way through with a toffee and honey quality, and again with the vanilla. the bitterness of the dark barley and the coffee are tempered and counteracted by the barrel, which makes good sense. the coffee isn't quite as robust as it is in the regular speedway, but its role seems more important here. it remains the focus of the beer I think, as much as the barrel character creeps into view. layers of flavor and one of the longest finishes in the business. I love the way it feels, with all this body and slickness, despite being a palate coater. great great beer overall, I would love to try some of the other variants they do with it.

edit. this is elegant for its size, and i develop a new appreciation for it every time i get the pleasure of drinking it. head and shoulders better than many of its peers!

Wow, this beer is so thick it could paint walls a nice toasty brown color. It is very complex with many flavors going on. I especially like the dark roast coffee flavors I get with the smooth yet potent bourbon flavor that warms you right up. I couldn't drink more than one in one sitting, it is definitely a sipping beer but quite enjoyable.

Had the pleasure of having this one last night. I had been waiting forever to get to try this and finally was bale to score. Immediately chilled this one and decided to break it out last night after having had the numbskull the night before. I had really enjoyed both of the other two BA Alesmith releases so far, and was hoping this would be the icing on the cake so to speak, and I have to admit I was anything but disappointed. Served at fifty degrees and decanted into a Snifter over the course of the evening.

Appearance - The pour on this one was just about as I would have expected, and just spot on. A rich, deep, dark as night colored liquid came gurgling out of the bottle immediately. Rich and thick in appearance it left no light inside of it whatsoever. Very nice one finger thick layer of chocolate colored foam, which had a nice tendency to stick around for a good long while. Really nice side glass lace thoroughly coated the inside of the glass throughout.

Smell - The aroma was perfect. Huge smell of coffee coming off of this one from the moment on opened the bottle, but I have to admit, it was more then that. It was enormously rich, with touches of oak and vanilla, hints of sweet milk chocolate and a touch of alcohol. This was definitely a big beer and actually very sweet. I was loving every minute of this one so far.

Taste - The flavor was just as heavenly as the aroma. Rich coffee notes just rolling out across the tongue, immediately coating everything that they touch. Sweet coffee flavor, with nice touches of oak riddle throughout. The barrel aging here took on more of a highlighting effect then n overpowering note. Subtle touches of light chocolate coming through towards the end as well. Wonderfully complex and rich, this was simply heavenly. Long lasting flavor of coffee, with oaky highlights, playfully dancing hints of vanilla just lingering for what seemed to be forever. I was really impressed here.

Mouthfeel - This was not as huge and thick and creamy as some of the other stouts, however it was masterfully done. Definitely full bodied, every sip of this was like a little slice of dessert. Really great bit of beer here, with a thick coating feel to it and a really nice carbonation profile.

Drinkability - I could have sipped on this one for days. There was no hint really of the alcohol to the extent you would have expected given the strength. A very solid sipper that I had a wonderful time with and would gladly throw down another any day of the week.

Overall would have to say this one was beyond excellent. A truly wonderful beer that I really could not get enough of. I would love to have this any day of the week, and I really think that hype to the level things get is not always deserved. But I have to admit, this was really damn good!

750 ml foil topped bottle into a couple of snifters. 2009 Edition. Many, many thanks go to Stakem for sharing this huge want of mine with me.

Pours black, topped with a solid finger of thick mocha froth. The retention here is fantastic, with a rich ½ finger that just slathers the sides of the glass with gooey brown oils and spotty lacing. The aroma smells of bourbon barrel right off the bat, with notes of charred oak, vanilla, and coconut that segue into those already delicious flavors of coffee, chocolate, and then toffee along the back. Just a little bit of alcohol warmth sits along the back of the nose as well.

The base sits at the forefront of the taste, with chocolate and toffee sweetness, and I’m happy to find that the coffee still has a lot of life left to it as well. Bourbon moves in along the back, with notes of vanilla, coconut, and then dry burnt wood across the back. The mouthfeel is full bodied, with some light crispness to the carbonation but the tannic slickness here from the wood makes this extremely creamy and easy feeling. For 12% ABV, the alcohol here is just magnificently hid. Just wonderful.

There isn’t quite a total melding of barrel and base Stout here but the beautiful transition from the Speedway to the barrel in the back really makes this beer work. I’m a huge fan of the regular Speedway Stout and this just really took things to a new delicious level for me. Thanks again for the share Adam. I enjoyed every drop of this fantastic beer.

This is a most heavenly heavy beer. Huge coffee and chocolate flavor, bourbon balances it out nicely. Perfection!

This was the '03 vintage, courtesty of TurdFurgison. Didn't bother to copy down the bottle number. Served in a Chouffe tulip.

A - Pours with minimal foam that quickly settles to a thin ring of bubbles, leaving behind no lace but some sticky legs instead. Body is black, with maybe a faint brownish glint at the upper edge.

S - Vanilla, bourbon, chocolate cake, plenty of oak and barrel, some light soy and dark fruit oxidation notes, and perhaps still a hint of solvent alcohol in there. Minimal coffee, but that wasn't unexpected.

T - The taste is more mellow, with some light oxidation notes, and big prune and dark fruit notes. Not as much chocolate, but more earth and charred wood instead.

M - No heat, extremely low carbonation. Full-bodied, quite chewy and sticky. Surprisingly little tannic character - seems to have faded in the intervening years.

D - I found this quite easy to drink, and went back for a few more ounces after my initial pour. I liked this more than the 2008 growler, but I'm not sure it's the mind-blowing experience others have described.

A - Pitch black through and through, Barrel-Aged Speedway Stout generates a mocha head worthy of praise and keeps it's loose form very nicely!

M - Heavy and full-bodied, AleSmith's barrel-aged Speedway Stout pulls no punches in the mouthfeel department. This thick and rich beer delivered the exact body I was expecting; creamy, smooth, and moderately sweet with a finish of warm alcohol that dries the palate out for a sort of balance.

O - After my first three failed attempts at the newly released barrel variants (read: price &gt; quality) of AleSmith here in Wisconsin, I was pretty weary of dropping nearly $40 on this bottle, but I've heard amazing things time and time again, for years no less. Of the four I've experienced, I'm happy to say, this bottle is the closest to being worthy of it's extraordinary dollar demand, though probably more than I'd pay for it again.

Barrel-Aged Speedway Stout is rich with chocolate intricacies but nearly devoid of coffee nuances; perhaps from it's age? It just became available here. Either way, it mimics the others regarding its apparent time in the barrels: short. Not boozy in the least, its robust, full body is demanding of attention but, it screams by like a race car; gone in a flash. Delicious as all hell, this lifts the beer that's aged in the bourbon barrel on a higher pedestal than the barrel its aged in while making both complimentary. Bravo, AleSmith!