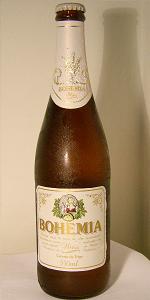 3.43/5  rDev +6.9%
look: 3.5 | smell: 3 | taste: 3.5 | feel: 4 | overall: 3.5
Golden orange color, slightly hazy.
Clove is predominant in the aroma, with a hint of banana.
Good carbonation, small bubbles. Light body.
It has a citric taste, more orange than lime. Zesty and quite refreshing, not bitter at all. Not overly sweet, giving a better drinkability than average weiss beers, though with less flavor. Thus, not quite true to its style, disconsidering that (for puritans) it is a nice beer. Overall positively surprised, which is good given the AMBEV stigma.

Appearance (3.5): At first, this looks like a world-class saison—that’s my first impression here. The body is a little pale for a hefe, but I don’t care too much. It’s perfectly cloudy but not opaque, and I’ll be damned if the fat two-finger head—which is very, very tight and bone-white—doesn’t take its sweet time receding. Some lacing, too, even if not a ton.

Smell (4.0): Clove is the strongest characteristic scent here, followed by banana esters—like banana Runts, if you can recall that candy. That’s exactly the kind of fruity sweetness I’m getting (but, mixed with clove and a little bit of generic baking spices). There’s some rustic richness that kind of smells like a hayloft, too. Surprisingly nice nose on this. Banana Runts, hayloft, and clove.

Taste (2.0): . . . but then it somehow tastes like an AAL, for the most part. Kind of watered down with the off-tang of adjunct malts and the water you used to cook some frozen vegetables. Eff? What the hell happened? It retains some crisp straw / hay-like character, and sports a very mild but drying, grassy bitterness from the hops. It’s not wholly unenjoyable, it just doesn’t taste like a hefe.

Mouthfeel (2.5): Very light and pretty thin for a hefe, and doesn’t have any of that chewiness that I expect from a good, full-bodied hefe. The carbonation is light and fluffy, never prickly and never particularly full. It’s not bad, and in its own right it’s nice and quenching—very light and dry enough to make it something you’d want to session—but like with the taste, it’s just not quite a hefe to me.

Overall (2.5): Y’know what? It looks and smells pretty good, all things considered, but the taste just isn’t there (for the style, certainly—and kind of light and weak, otherwise) and neither is the body. It’s not BAD, per se, but it’s below average, at least for the style. I wouldn’t be opposed to drinking this by the pint over the course of a long night—seems like it would be built for that, actually, even though that’s not how it’s marketed or received. Oh, well.

Reviewed by Northsider from Illinois

A - Much better to look at than most Brazil beers. Hazy golden yellow.

M - smooth enough to make it easy to drink

O - Not THE best hefe I've had, but decent enough to drink again and be enjoyable. Definitely recommended over most the other typical beers served in Brazil

Taste is light and refreshing, lots of wheat, some light Bavarian malts, some citrus, bit of banana and clove like spices, light Bavarian yeast flavor, a light flavor of cheap light off flavor that I still think is coming from minerals in the water. Finishes fairly dry, lingering citrus, orange peel, wheats and light malt, as well as a slight lingering flavor of that off flavor from the water I think.

Mouth is fairly light, with tons of carbonation.

Drink is pretty good, light and sessionable, light flavors but tasty, no real abv, and a decent dry finish.

Reviewed by brdc from Wisconsin

A very suspicious me poured this one into their own glass, expecting very little knowing it is a BMC, and after having their awful Confraria.
This one is significantly better.
Hazy bright yellow, decent if not great white head, average retention and some lacing.
Aroma is nothing spectacular but pleasant, with bublegum, banana, wheat.
Light bodied, very refreshing, with some slightly sweet banana and gum notes.
Worthwhile, and considering it is a BMC, a very good beer.

Reviewed by Halcyondays from California

A: Pours a hazy bright yellow, with a firm thick white head as to be expected in this style, some sticky lace.

T: The esters are really minor in the actual flavour as compared to the nose. Heavy lemon drives the flavour, rather 1-dimensional. Good wheat flavours too, but really just tastes like an APWA.

D: A quaffable wheat ale, but really nothing more. Though if this is a macro brewery they are certainly making a better product than the BMCs of the world.

Lovely to look at. Faded pee yellow color...eh, just look at a wheat field and you´ll see what I mean. Cloudy with a thick and fluffy head on top that sticks well to the glass. Big aroma of banana bread in the aroma, soft clove, well placed phenolic yeast adding another layer of complexity. The flavor resembeles the aroma as well, and darn it´s good! There is a hint of chewing gum found in the taste, along with the standard wheat, clove, and banana.

A good treat to have on a hot day. Amazingly, this comes from a macro brewery and can be found at an affordable rate in Brazil. It´s better than a number of the Bavarian hefe´s in my opinion.

Reviewed by rodrigohen from Brazil

4.15/5  rDev +29.3%
look: 4 | smell: 4 | taste: 4.5 | feel: 3.5 | overall: 4
A beer that can be put in a higher level of quality, in terms of matching the style. Although its made by a macro brewerie, the beer is really good, with a amazing smell and taste.
It has a nice and stable white head, as a wheat beer should have.
Well balanced between the esters (banana) and phenolic aroma (cloves), as a good Weissbier should be (in my opinion, at least).
Good carbonation, giving a nice sparkling character.
A good beer!!!

Reviewed by Beeryce from Virginia

3.72/5  rDev +15.9%
look: 3.5 | smell: 4 | taste: 3.5 | feel: 3.5 | overall: 4
This is a good beer from the best Brazilian Macro Brewery. They are bringing different styles and tastes of beers to the mainstream and helping the education and introduction of beer culture to Brazilians.

Available only in 550ml bottle, with a validity date on back label, this unfiltered Hefe Weizen is 5.6% alcohol by volume.

The beer formed a frothy voluminous creamy white head upon pouring that easily overflowed my .5L Brazilian World Cup Champions commemorative Paulaner Weissbier glass. The stability of the head was sub par for a hefe weizen as it very quickly dissipated and produced only slight lacing; and no I did not garnish. The beer itself was a very turbid golden-yellow straw color. The sedimentation was clearly visible upon pouring and in the bottom of bottle. The beer was highly carbonated releasing bubbles from solution through its entirety.

The nose was sweet and citrusy with strong banana and clove overtones and a hint of wheat husky/hulliness in the end. The taste was much the same beginning with a bright citrusiness that melds to wheaty-maltiness with hints of banana from yeast. The beer finishes with a slight hoppy bitterness that was unfortunately infringed upon by a minor, but appalling tinny aftertaste. The mouthfeel was viscous for a Weissbier but appealing.

This is a very drinkable beer for me; it is both thirst quenching and flavorful. It is easy to find throughout Brazil and is, as I stated, one of the better beers available from any Macro brewery in the country. It is also very affordable as the 550ml bottle is always priced under $4 Reais.

If you have the chance to try this beer I recommend it. It may not be the best Weissbier you ever drink but it is rather true to style and flavorful.

Reviewed by schiaveto from Brazil

It has a nice and stable white head, as a wheat beer should have.
Well balanced between the esters (banana) and phenolic aroma (cloves), as a good Weissbier should be (well, in my opinion).
Good carbonation, giving a nice sparkling character.
For me it is better than the german Erdinger Hefeweiss, which is a sales success in Brazil.

Reviewed by decom from Brazil

Not bad for a macro beer.
It forms quite a nice head when your pour it, but the head subsides quicker than you would want it too.

You won't find as much banana and cloves flavor here as you would on an average hefe weizen, but it's not all that bad. Worth a try, if you're not feeling very picky.

Reviewed by soper2000 from Texas

3.85/5  rDev +19.9%
look: 4 | smell: 4 | taste: 4 | feel: 3.5 | overall: 3.5
Brand new for this year. I was pleasently surprised to see a weiss beer in Bohemia's family which now consists of three beers (a pilsen, a schwarz, and now a german weiss.), as one of my brazilian friends fell in love with wheat beers during his visit here. The great thing about this beer is they actually have instructions on the label about how to pour it properly. I found that very amusing, but this is the first weiss I've encountered during my four trips to Brazil. It pours an appetizing cloudy(not filtered) maize color with a huge white head served in the appropriate glass. Aroma contained faint notes of banana. Taste was nicely balanced, with a nice yeasty banana flavor. Decent body too. One of the better popular beers that i have had here.
Jun 18, 2004
Weiss from Cervejaria Bohemia
Beer rating: 77 out of 100 with 26 ratings