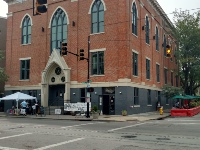 Great ale house in Over the Rhine, Cincinnati. Worth checking out over Rheinegeist in my opinion.

Visited on a Sunday night. Not too crowded, with a variety of folks, some watching NCAA basketball tournament and others as families just doing their thing.

V - Built inside an old church, the inside has some of its past architecture, but because the building had been almost abandoned prior to its conversion to a brewery (lost part of its roof in a storm), the vibe is a brewery sports bar inside a old historic structure. Church on outside, brew pub on insider. Love the big picnic style tables and benches, which you'll quite often share with another party. A smallish bar. Well lit and a good beer vibe. A nice place to bring family, friends, dates, etc. 4.0

Q - I thought their beers were well made and there's nothing better than drinking a beer that was made just yards from your table. 4.0

Ser - Friendly, helpful, generally knowledgable, but at times a bit slow or absent. 3.75

Sel - An excellent selection of their brews. A good variety, but the IPAs tended to standout. 4.0

F - A rather limited menu, but enough variety to satsify most. You will not be disappointed. 4.25

An exceptional venue with many beautiful and interesting features. A grand staircase leads up to the main floor with a huge U-shaped balcony overhead. The balcony has a bar and a variety of seating. All beers tried have been in the good to excellent range. The steak salad was large and delicious but the hunter stew was disappointing.

I was shocked when I saw an average score of 3.something for this place. It is amazing! Ambiance is second to none, and all the beers are serviceable with a few notable home runs. This is one of my favorite breweries in the country!

Taft's is a cool place....established in an old church. There are two sections...two story main restaurant and bar area....and then a basement bar area.....both really neat. The quality of the beer was great. The service was friendly and attentive. They had 16 of their own beers on tap....something for everyone. I didn't have their food....but heard great.

Visited in the middle of a workday, so the place wasn't very crowded. It's a beautiful old church with amazing architecture that has been renovated inside into a cathedral of a beer hall. Good service, good food, and a nice selection of beer, but I wish they had some "guest taps" in addition to their own offerings.

Situated in an old church that Taft used to walk by when younger. This fine
establishment pours great ales and serves some darn fine food that is well
presented and tastes as good as it looks. Go for the Big Billy or ale house
sandwich with their delicious red sauce to dip the home made tots into along
with delicious beer cheese and the beer----did I mention the beer???? Solid
representation for all taste buds from IPA's to stouts and porters as well as saisons
and Belgo styles. Something for everyone in a beautifully restored church with an
upstairs that sports a wonderful view.

Check it out---second visit was as good as the first with great service and knowledgeable
staff.

Taft's is in a converted church. Seating is on benches by long tables so sharing a table with people you don't know will happen. The beer selection was decent and the beers I tried were very good. Most of the food is tri-tip in some form or other, but they do have chicken as well. The food was excellent and the service was good. They do not have any pictures on the walls of the conversion from a church, but if you ask your server they do have a book with all sorts of history of the place. If you're in Cincinnati make it a point to hit this place :)

Overall an impressive setup. The food is amazing and the beer was "OK". The vibe and food is what makes this place good for me. I believe the beer is overrated though.

Converted Church Brewery. They spent a ton of money on the place. You got through the front door, up a dozen steps and the full open area of the church fills your view. The bar is across where the alter would be and there are huge brewing tanks behind it and behind you in the choir. The tables are long, communal set up. The food is OK - they focus on beef tips. The place is beautiful. There is a smaller bar downstairs with a separate entrance, that has a completely different feel.