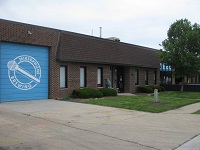 The Blue Room buildout greatly increased the amount of space and added to the ambiance of the place. Love the consistency of the theme and color scheme. Music is a focus obviously but tends to depend on who is working whether it is too Top 40 vs. deep cuts.

Service is typically strong though some of the servers come off as a little hipster condescending and others show their favoritism for regulars.

Beer is a huge range and you can typically find at least one example of any one of 12 different styles, from lagers to BA stouts and sours.

Post-Covid notes:
Organization of social distancing is poor. There is no logistics to separate to go orders from table seekers. Table setup appears distanced and servers take precautions seriously. No curbside pickup which is quite inconvenient and adds to traffic in the taproom.

Overall, it is a good option when in the area and there isn’t a pandemic going on.

I enjoy the music related vibe as Mikerphone. It’s got more a modern and clean feel to it as compared to some more industrial, rustic or grungy feels that I’ve seen at breweries. The outside patio is a great addition in nice weather and/or for eating from the food truck that was there.

I thought the quality was very good, driven by the IPA and stouts. I did have a fruited kettle sour and a barrel aged barleywine that were not good, but nothing I’d order again.

The service was very good. Friendly and attentive. I was there on a Phase Three bottle release night, so it was very crowded. They allowed people to enter when others exited to keep the inside comfortable and not overcrowded. They did a good job with they.

Nice place. Feels like a small brewery. Beer is good. Theme and decorations are cool, not too overdone. Bar service (at least right now), no taster flight, but six ounce pours are good too.

Mikerphone is a great option if you’re stuck by O’Hare. It’s not really accessible by public transit though. Hidden away in an industrial park where you’d miss it if not for the neon blue sign along the highway proclaiming “BEER HERE ->”. Plenty of street parking on a normal day, Ubers coming and going. I’ve been enjoying their beers for awhile at Beer Temple and O’s Tap, never felt the need to schlep out to Elk Grove Village.

Inside it’s compact, though there are two rooms and a patio. There’s a dedicated line to order at the bar. Neon blue everything, speaker fronts mounted on the wall behind the bar. A couple flatscreens. Fairly simple and business oriented feel.

Service was quick at the bar, there were a couple people pouring and they were efficient. Nobody really stuck around for conversation but it was pretty lively on a weekend.

Selection was pretty good, though leaning heavy on big sweet stouts in the middle of August. To their credit there was a radler and Berliner, neither of which I had to have more of. They have a few good hazy IPA’s, coffee stouts, and overfruited kettle sours. Adjunct everything, nothing says excess like excess, is the motto here.

Overall it’s worth a stop, though i’d skip special release days which sound like a cluster. It’s not big enough to deal with a huge crowd. Drop in if near O’Hare, they’re definitely the best option in the area.

Our group of 4 stopped here to try their beers. The brewery is located in a light-industrial park away from traffic. On-street parking appears to be the only choice. The pub occupies two bays in this building, and each room has a distinctive character to its vibe. Service is from the bar in each room, and both bars seat 8-10 customers. The bartenders answered our questions very well. There is a patio at the front of the building, but no alcoholic beverages are permitted there.

We wanted to try a variety of the beers for proper evaluation, but sampler flights are not offered. Instead we ordered a selection of five beers in 6 oz. glasses. This place is good at brewing sweet beers! If you like that kind of thing, this is your place. There were a few beers more into the standard styles, and we chose a double IPA just to have something more to our tastes. None of us were really into sweet beers, and it was difficult for us to drink much of them. However, we rate our beers to style, so as best as we could since we don't drink many pastry or milkshake beers, we ended up giving all of them either a 3.75 or a 4.0 score.

There is no food available here but they are food friendly. If these types of beers are your thing, then this is the place for you.

Wow, a line out the door because they're at capactiy?! I'd tell you not to attend during a release, but there are so many damn releases going on all over the place all the time that there really is no way to keep track of it all anymore without a damn secretary.

Anyway, the wait wasn't too long and there actually were plenty of seats we could squeeze into once we got in, both at the short bars, and the longer picnic-style communal tables. The interior itself is pretty unique, obviously very music-centric, with records on the wall, microphone tap handles, and tributes to classics all around, whether hinted at or explicitly displayed. The bright blue colors make just about everything 'gram worthy, but that's not what you're here for.

They have two bars, one with a slightly larger selection than the other, which mostly serves to keep the beer flowing for all comers when it gets busy, which they do well with on the service side. Variety was mainly pastry stout vs. hazy IPA, with one kettle sour thrown in the mix. Of the relatively small draft list, there were no guest drafts.

Thing is, they are going way too hard in the paint for the pastriarchy. The BA S'more Cowbell we had on draft literally coated the glass in a white oily film and tasted very sweet of melted M&Ms, with no barrel character at all. I think the locals still go apeshit over it for now, mainly because it has traded well in the past, but I don't think they can sustain this. Sure, the Bean Spirit variants have always been a treat, but that's all they are, a treat. You can't drink that stuff often. They seem like they're doing excess for excess sake, and they may have just learned their lesson on that with this past release. Hopefully they dial it back a bit, and focus more on other styles while they're at it.

Very cool place. Very friendly, engaging staff. Had a great conversation with the girl pouring the beer, she was very knowledgeable about the history of the brewery and the beers. Will definitely be going back!

A very cool place. It is small and little parking tucked into a small industry park. Phenomenal beer with great variety. Cool music on the hard rock end. A must see.

Long story short, really liked the beer when I stopped on a recent Saturday around noon. The space is good for what it is, but feels a bit too sterile for me. Didn’t have a level of comfort or coziness that I look for in a tap room. The worst thing was the staff interactions. This younger woman and taller guy spect about 45 minutes talking to each other and could barely be bothered to interact with customers unless they were getting more beer. An older guy next to me mentioned that he was picking up hints of cinnamon on his pour - the staff simply said “there is no cinnamon in that beer” and then went back to taking about jam bands with the lady. They got talking about a beer that I really liked and I tried to jump into the conversation (they were literally two feet from me so I wasn’t trying to butt in), and they gave the general “oh that’s great” and went about their conversation.

Overall, I hate when younger brewers get to think they are the privilege wish grantors and don’t think about being hospitable to people that want to give them money. The only reason I’m not grading even harsher is that thy were prompt.

9/15/18 (Elk Grove Village): First trip to Mikerphone, highly recommended beers from brother and friends. It's a hike from the city, but worth the trip. Small seating area, nice clean facility. Bar seats for several, and a few long tables. Nice speakers on the wall pumping in very good music. Nice crowd on this Saturday afternoon, many coming in for pick bottles and place full for the most part during my entire stay. Twelve draft pours of various styles. Excellent bartenders who really love beer, like discussing their beers and others, and awesome comp samples of special ad hoc blends such cinnamon toast crunch infused Imperial Bean Spirit.

I had three excellent beers and brought several more bottles to go. Was able drink two Super Bean Spirit pours, great introduction to the brewery. Well worth the trip out to the burbs, went back a week later and look forward to future trips!