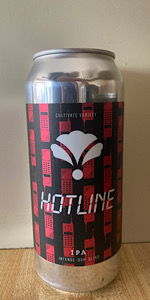 A: The beer is very hazy and a bit pale yellow in color. It poured with a quarter finger high white head that has good retention properties and hardly died down.
S: Moderate aromas of stone fruit and lime are present in the nose.
T: The taste has flavors of gooseberry, lychee and mango. No bitterness is perceptible.
M: It feels medium-bodied, smooth, and somewhat juicy on the palate with a moderate amount of carbonation.
O: This New England IPA has a nice and smooth mouthfeel.

Pours out with about a medium level of haze and cloudiness. Moderate cap and some strands of lace left on the glass.

Tasty and enjoyable take on the style...more pineapple juice notes flowing through the mouth...pleasing and well worth a try.

This is my first experience with the vaunted Bearded Iris Brewing Co., and I'm really excited to give it a shot. My local store got a few different IPAs from them in a recent delivery. Not sure who's distributing them around MA, but I must tip my hat to them for a job well-done. Now, granted, this is a month old and just hit shelves here so, maybe not AS fresh as I'd want, but beggars cannot also be choosers, so I shall gratefully accept whatever I can get.

Hotline pours an opaque yet vibrant-looking orange color with a collar of fine foamy bubbles building up to about two fingers upon my initial decanting. The bigger bubbles quickly pop and fade away, but the head itself is retentive and lingers in slightly-smaller form (half-finger) after five or so minutes. Lacing is fairly decent but not amazing, though the legs here follow along with the retention and seem quite solid. Overall, a good pour, but nothing that stands out.

The nose has quite a bit of dankness, resin, and earthy spice mixed with notes of papaya, tangerine, and grapefruit. Hints of berry-like tartness and some slight deviations into grassiness and pine show up here and there as well, which are all things that are happening that make me very much unsurprised to know that Mosaic features here. That said, I do like the Simcoe and Motueka assistance, though I think Nelson gets lost in the shuffle, and Citra feels like it's just along for the ride in its own pungent and effective way. I mean, this is a lot of heavy-hitters in one place, and the combination is about 60% as good as it probably could be, which is still great at the end of the day because, man, this is pretty damn aromatic. I get a hint of creamsicle and marshmallow in here as it opens up, as well, but I don't think there's any sweetening agents or adjuncts in here. Just a note.

Flavor profile is pretty nice, but I think the month this has been canned has probably hit it slightly hard. Flavors of ripe mango, papaya, and mixed berry upfront with hints of clementine and grassy resinous notes in the finish. I do like the balance that the oats/wheat bring here, and there is a light bitterness that lingers just a bit with each sip. Carbonation is on the low side, but the flavors are pretty punchy and manage well despite that fact. Some nectarine and melon as it acclimates to room temperature, which are elements that work well with some of the earthiness and spice that I was picking up, as they provide a good foil to the tropical citrus that I got immediately. Overall, good stuff, but I'm not rushing out to grab a bunch more. Maybe I'm just spoiled by being in New England, but I've had plenty that's better.

There’s a whole lot going on in this excellent 7% DDH IPA besides “bling,” whatever that is. At least four hop varieties make their presence known, but the balance is on the money. Color is a pleasant hazy golden, nose is redolent of pineapples, citrus, mango and even peaches. Mouthfeel is both smooth and chewy. Pineapple and grapefruit linger in the finish. Overall, a winner if you’re a DDH IPA fan—and I am.

T-Relatively balanced...biscuit like malt holds its own and actually complements the aforementioned hop flavors nicely. Hops are more assertive on the nose but fit nicely in this. Getting some green grape hop impression on the taste as well.

F-Love the balance to this. Leans a little sweet on the finish but not hazy IPA sweet.

A: Pours a murky medium golden yellow in color with moderate amounts of fine active visible carbonation rising along the edges of the glass and moderate bright yellow + bright orange + burnt orange + peach colored highlights. The beer has a two finger tall dense sudsy foamy white head that slowly reduces to a handful of small patches of medium thick film surrounded by a large patch of very slightly mottled thin film covering the remainder of the surface of the beer and a medium thick ring at the edges of the glass. Slightly heavier than moderate amounts of lacing are observed.

T: Upfront there are moderate flavors of biscuit + pale + oat malts with a light to moderate amount of sugary sweetness. That is followed by moderate to strong flavors of juicy citrus/grapefruit + citrus/orange + tropical/mango + tropical/pineapple + tropical/guava + stone fruit/peach hops which impart a minimal amount of bitterness which fades away quickly leaving slightly stronger than moderate lingering citrus + tropical hop flavors.

M: Medium bodied with moderate amounts of carbonation. Upfront slightly crisp with a light amount of soft/fluffiness mid-body and a very light amount of dryness in the finish.

O: Easy to drink with well hidden alcohol and a decently soft/fluffy mouthfeel. Very enjoyable hop profile with lots of citrus + tropical + stone fruit flavors and aromas. I could easily have a couple of these.

Interesting hop bill. Balanced, smooth and more interesting than most.

Pours a dark yellow color with a white head. Smell has citrus and guava, Taste very citrus forward with mango and tangerine. Mouth feel very sweet and fruity ,not one of my favorites from BI.

After two really good experiences I decided to gamble on a full four pack of a new IPA, something I haven’t done in a while, especially with NE IPAs. 16 oz. gamble can.

The pour is dark wheat straw with a head that collapses faster than the Packers offensive line under pressure. The nose brings lots of peach plus some melon & citrus.

Hotline is thicker than peach cobbler & tastes a bit like it too. Lots of peach in this to my palate, with throughputs of melon, citrus, & the swamp water clearly used in the boil. Mid palate brings oranges, sugar that almost overwhelms everything (like in a bad NE IPA), with only a touch of finishing bitterness. Thick. Twelve ounces servings would have been a better choice.

Some nice stuff here but the sugar careens really close to the guard rail of the abyss. Pretty good beer.

"Extra, Extra, Drink all about it!" Hot off the press, Bearded Iris has something to say. With a complex hop blend of Mosaic, Simcoe, Citra, Nelson and Motueka, this New England-styled IPA speaks volumes.

Pouring with the expected matte golden opaqueness, Its frothy ecru cap releases a plethora of citrus, tropical, orchard, vinous, herb, spruce and grasses. A light and pastry sweetness of honeysuckle, shortcake and vegemite coats the tongue first with cereal grains and a rounded malt taste.

But the real story starts as the hops bounce off the middle palate with grapefruit, orange peel and lime. Bleeding from a citrusy upstart to a succulent tropical taste, its the suggestions of dried pineapple, mango and passionfruit that gives the beer a sherbet-like fruitiness. While pawpaw, peach and grape nuanced evolve, the late palate is moderately bitter with hop spices that resemble gin-like botanicals, green tea and parsley.

Medium light and oddly at risk of resembling thinness, Hotline is surprisingly dry and stemmy as it seems to side slightly with West Coast IPA. A medium long finish of hop spices, spruce and citrus peel extend into grassy, cedar and hemp-like aftertaste.

Feel is acidic but not particularly juicy, no creaminess, a bit bland comparatively to their other beers, with moderate heat and heavy carbonation. Resins are moderate and compound on the palate at the end.

Overall, kind of a blah beer for me from Bearded Iris, they have done better, but it's not a bad beer by any stretch. If you can pick it up fresh definitely do it, I wish I would have drank it straight out of the gate at 3 weeks old.

Pours a hazy, light orange with a thin, white head.
Super juicy smelll with melon. Tangerine, grapefruit and malt.
You n the bitter side. Slight dank. Pepper and spice. Slightly gritty. Pine resin.
Another good one.

From a 3-week-old can, pour a very hazy dark orange. Off-white head leaves streaky lacing. Smell is detectable while pouring the beer, with tropical fruits, citrus and some piney dank dominating. Taste follows. Excellent example of a NEIPA.

A: Hazy yellow/orange with rich white foam and thick lacing.
N: Lots of tropical notes and some citrus with minor dank notes.
T: Really creamy tropical hit with fresh lemons and limes and some oranges. A mild dank finish.
M: Very smooth and creamy with minor bite. No ABV, very well hidden.
O: This is a very well done NEIPA, enjoyed it a lot.