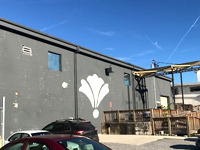 Small craft brewery hidden in a largely industrial area in Nashville. Neat artwork, cool people and great beer. Many delicious hazy IPAs that looked like carbonated juice and a very good kolsch that I highly recommend

A mecca for NEIPA (and IPA's in general) lovers in the southeast. I love to go there so that I can stock up on good fresh IPA's. A visit there is a religious experience.

No doubt, the very best Nashville has to offer, as far as brewery and quality goes. Do yourself a favor and stop by. The Germantown area in general is cool as well.

This is one of the coolest production taprooms I think I've ever been in. Strewn about seating under large, functional chandelier surrounded by unique wall art capped off by a cool backdrop to the bar in a large old-meets-new decorative portrait frame for the taplist.

A long separate bar top faces the production area, where a DJ was mixing some tunes while we were there. The lights were set low and the DJ had some projectors in case anyone had ants in their pants, and the brewing area was also dimly lit. It's both simultaneously mellow and high energy hip. There's also a fairly sizeable outdoor patio if you'd like to further mellow out in the Nashville heat, where the music is also pumped out to.

The tap list was almost entirely dominated by variations on IPA, but for a pilsner and a kettle sour. I've never been too floored by any beer of theirs I've gotten in trades, and that held true during my visit as well. The quality is all right, they just don't seem to be hitting their potential as far as flavor profiles.

The spot generating the most buzz from the Music City. I happened to get to the taproom minutes before a mob of people, coming in for a can release. In the few minutes before I was overtaken by the swarm, I loved the quirky feel of the taproom. The beer is really, really quality. I wish I would've picked a different day to stop by. I feel like I didn't get to really enjoy all this place has to offer.

Stopped at the brewery on our way back from Cincinnati. A bit hard to find but definitely worth the effort. The service was outstanding, friendly and helpful. Enjoyed the vibe very much. Great beer people.

The beers I had were great, very high quality. Will go back when I can.

Visited for their three anniversary party/release. The staff rocks and were super chill and friendly. They actually bought doughnuts, coffee, and brought out heaters for everyone who waited in line in the elements. They controlled the line and accommodated as best they could. The draft selection was on point and the ambiance was something I really enjoyed. I will absolutely visit again when in Nashville.

Chill vibe, with help and advice at the bar (no table service when I was there). Cozy atmosphere, with tables, couches and a pool table. Ten or so beers available for tasting, half and full pours. Growlers, 4-packs and march for takeaway.