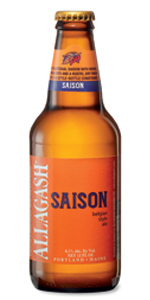 Notes: Allagash Saison is our interpretation of a classic Belgian farmhouse style. It is a golden hued beer, brewed with a 2-Row blend, malted rye, oats and dark Belgian candi sugar. Saison is hopped with Tettnang, Bravo and Cascade hops. Fermented with a traditional saison yeast strain, Saison exhibits notes of spice and tropical fruit in the aroma. Citrus and a peppery spice dominate the flavor and make way for a pleasant malt character. Saison is full bodied with a remarkably dry finish.
View: More Beers | Place Reviews
Recent ratings and reviews. | Log in to view more ratings + sorting options.
Ratings by Justincredble:

Rated by Justincredble from Pennsylvania

Reviewed by VALIS666 from Massachusetts

Reviewed by Mugman8 from New York

Reviewed by SaisonMaker from Massachusetts

Reviewed by flaskman from New York

4.06/5  rDev +5.5%
look: 3.75 | smell: 4 | taste: 4.25 | feel: 3.75 | overall: 4
Poured from a 12 ounce bottle into a mason jar. Almost clear yellow with a 1/4 inch frothy head that dissipated quickly to just the edges of the glass. Smells as it should. I taste a citrus funky farmhouse flavor that is a little spicy. Clean and fresh. Very crushable. A solid saison that is not overpriced, readily available and never disappoints. I highly recommend it to anyone that feels like a saision once in a awhile.
Jul 01, 2020
Rated: 3.54 by Branlott42 from Missouri

3.94/5  rDev +2.3%
look: 4 | smell: 3.75 | taste: 4 | feel: 4 | overall: 4
L: pale lemon yellow with a loose white head that dissolves into a lacy film
S: very mild citrus and pine
T: mild lemon and pine with a slight acidic tartness
F: smooth with a slight tingle, dry as the back of the tongue
O: delicious. This is a go-to when I tire of lagers. Very well balanced with a enough hoppiness to make you want to refresh without being bitter or sour and a great alternative to an IPA

Rated by DuaneL from Delaware

Reviewed by Gripnrip207 from Vermont

4.56/5  rDev +18.4%
look: 4.25 | smell: 4.5 | taste: 4.75 | feel: 4.25 | overall: 4.5
A huge fan of the Allagash line, as a Mainer, so i may be biased. However, this is a phenomenal beer. Consumer out of an Allagash goblet glass. Pale yellow, and incredibly hazy. Foam laces the glass. Aroma has a bit of funk, followed by esterous yeast, and a touch of grapefruit from the hops. Remarkably dry taste. Incredibly delicate flavors. Grapefruit, subtle yeasty funk. Mouth feel is almost not full bodied. Definitely refreshing and very drinkable. Great summer beer, but a versatile beer for any season. Great price for an entry saison as well.
Nov 16, 2019

4.17/5  rDev +8.3%
look: 4.25 | smell: 4 | taste: 4.25 | feel: 4 | overall: 4.25
Served from a 12 oz (355 ml) bottle into a nonic glass at Biergarten in Terminal C of LaGuardia Airport.
A: Pours a hazy to cloudy, lemon yellow color with a two finger, foamy, white head, nearly a finger of retention, and rings and rings of spidery lacing.
S: Spicy with aromas of lemon, unripenef pear, honey, coriander, and clove.
T: More semisweet than semidry. Flavors follow the nose with the addition of a bit of earthiness. Light bitterness with clean finish. Very refreshing.
M: Light to medium bodied with solid carbonation.
O: Allagash has produced a fairly dry, rather flavorful, and very refreshing Saison. Glad to have tried it; will look to it as a go to.

Reviewed by JRed from New Jersey