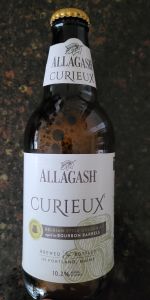 Notes: First brewed back in 2004, Curieux was our first foray into barrel aging. To make Curieux, we take our Tripel and let it age in bourbon barrels for seven weeks. Once that time is up, we take the beer out of our cold cellars and blend it back with a portion of fresh Tripel. The resulting rich, golden ale features smooth notes of coconut, vanilla, and a hint of bourbon.
View: More Beers | Place Reviews
Recent ratings and reviews. | Log in to view more ratings + sorting options.
Rated: 4.5 by DoctorRobert1969 from California

Appearance. Slow pour to leave the sediment behind yielded a golden yellow, partly hazy beer - as some of the finely dispersed sediment did come along with the pour. Nicely thick white head with islands of persistent lacing.

Taste: Interesting blend of a tripel with yeasty notes, citrus, peppery flavors, and what you would expect from the bourbon barrel - vanilla, boozy, oak. Lingering noble hop bitterness at the finish.

Mouthfeel: Good carbonation and thickness. Brisk, but not fizzy carbonation, that gently scrubbed the tongue. Some lingering stickiness on the teeth. Alcohol well hidden.

Overall / Drinkability: The name of this beer says it all - it's a curious beer alright. I always think of bourbon notes going more with darker malts and different flavors than a Belgian Tripel. And yet it works. A very interesting sipping and savoring beer. I feel like I want to pair this with something to eat, but I have no idea what. One per evening is enough though.

Taste: It has lemon and spice flavors with smooth bourbon. The alcohol and bourbon become more pronounce in the aftertaste. There is a touch of grainy sweetness in the background.

Feel: It has a medium body with strong alcohol warming.

Overall, a nice touch to a tripel with the bourbon barrels.

Reviewed by MadMadMike from Florida

4.47/5  rDev +4.4%
look: 4.5 | smell: 4.25 | taste: 4.5 | feel: 4.25 | overall: 4.75
12 ounce bottle brought to Florida from Boston - no distro! Poured at 50° into a Hertog Jan snifter. Fine white head domes the glass.
Smell is bread, oak, corriander and familiar Belgian yeast.
Tastes like a classic Belgian made lovingly, then rested in oak. The oak notes are killer. Little spice and vanilla, bit of banana. Great dry finish.
Feels medium bodied with appropriate carbonation.
Overall, a lovely Belgian ale aged in an oak barrel to perfection. The Art of the Craft.
May I have another, please?

This is an interesting and tasty take on the tripel beer style. The appearance, smell and taste all point towards its tripel baseline, delivering some nice spicy character. The bourbon barrel aging develops midway through the sip and lingers into the finish. The brewery's label description of "subtle notes of vanilla, caramel, and oak" weren't really perceived by me (perhaps in hind-sight I can agree with the caramel and oak points - but they didn't really standout to me). I like the beer and am glad to have one additional bottle of this beer.

4.31/5  rDev +0.7%
look: 4.25 | smell: 3.75 | taste: 4.5 | feel: 4.5 | overall: 4.5
L - Golden with a white head that dissipates somewhat slowly and leaves a cap behind
S - some bready belgian yeast, oak, some spices, but otherwise pretty faint
T - bready belgian yeast, some banana, light spices followed by a good amount of oak, vanilla, smooth bourbon, and some caramel.
F - light to medium bodied with moderate to high carbonation.
O - a pretty interesting brew. Starts out like a typical Belgian triple, but follows with a ton of barrel character.

Poured into a Chimay goblet, this was a dark golden amber color, with a thin, bubbly, off-white head.

Fruity and spicy nose, in that order. Not that dramatic. As it warms, a little bit of boozy, bourbon-y sweetness becomes noticable.

Taste is considerably more complex than the nose. It's where the barrel aging becomes apparent. Fruity start, reminiscent of apple juice, and then things get oakey. The bourbon barrels add, in addition to notes of bourbon itself, a vanilla-like aspect, and there's a definite alcohol heat in the background.

The body is light for a 10.2% bba beer, but is definitely not truly light bodied. Mouth feel is lightly creamy.

Is this a Belgian golden ale or a tripel? If this was a Belgian tripel, as it's called here, I find it a bit lacking. I think there should be separate style when it comes to American and Belgian tripels. As an American-brewed Belgian style beer, this is pretty awesome, but it doesn't have that authentic Belgian feel or look. Then again, I've never had a true Belgian-brewed tripel this high in alcohol, at least as far as I can recall, so it's possible one wouldn't have the big, fluffy head one normally associates with Belgian abbey ales. It's very close to being a great beer, but doesn't quite get to that point for me. Anyway, style quibbles aside, I enjoyed this. The bourbon aging didn't drown out the golden ale flavors but augmented them. It's too boozy for me to want a lot of in a sitting, but this was a great beer to drink as a bit of a reward after getting some work around the house done.

Reviewed by CBlack85 from South Carolina

The beer pours a clear golden yellow/straw color with a huge white foamy head that slowly recedes leaving behind a moderate amount of lacing.

The aroma has a lot going on, with some banana, apricot, vanilla, peppery spice. Not much actual bourbon aroma, but there is just enough to hint at the barrel aging. Very nice and inviting

The flavor is toasty and lightly bready with some fruity notes. Banana, apricot, coconut, and vanilla complimented by a peppery spiciness, and a sharp finish. Medium bodied and well carbonated.

Overall this is a nice beer and coming in at a big 10.2% you would expect more booziness, but the alcohol is well masked, making this beer easy to drink. A great example of a style that I took way too long to come around to…

Reviewed by mikeinportc from New York

Taste is similar to aroma, but with the orange rind element less jammy . Slight spiciness, and light bitterness. As it warms, more oak tannin becomes apparent.

Overall, pleasant, and surprisingly easy-drinking for what it is. I'd never guess that it's > 10% abv, if I hadn't read the label.

4.35/5  rDev +1.6%
look: 4 | smell: 4 | taste: 4.75 | feel: 4 | overall: 4.25
Poured a hazy light gold with a half finger white fizzy head that dissipated quickly. Nose of mild banana, citrus and subtle bourbon. Light tastes of banana, malt, and hops. Medium bitterness and heat like white pepper or cloves. This gives way to a sweetness and oak most likely from the bourbon barrels. Medium mouthfeel and carbonation. The booziness becomes pronounced halfway through the drink. This beer started out on a bit of a ho hum with me and then really grabbed me.
Jan 20, 2022
Rated: 4.35 by irishevans from California