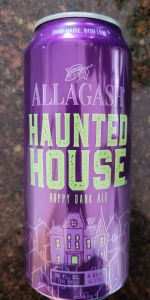 Inspired by a love for Porters and our House beer, Sean, our plant engineer, came up with a recipe for Haunted House. Brewed with roasted barley and Black Prinz malts and hopped with Tettnang, Chinook, and Saaz, this beer has a rich chocolate brown color, a roasty, coffee aroma and flavor, and a nice astringent, mildly bitter finish. 6.66% ABV. Spooky!

Straight pour from a 12oz pry-off bottle to an oversized wineglass (Tired Hands stemware, to be precise). According to a packaging date printed in white at the right of the label, above the barcode and below the brewery info, this was bottled on September 21, 2016 at 8:14 PM, if I’m not mistaken (“09/21/16 20:14”). That would make this beer just under five weeks old at the time of consumption.

Appearance (4.0): Two fingers of soft, pillowy foam rise off of the pour, capping and ebony-colored body. The body is just thin enough to show dark, cola-brown highlights at the edges when held up to light, whereas the head is a beautiful dark tan color, like coffee ice cream or mocha cappuccino froth. The head dies down fairly slowly, and leaves lazy, sudsy legs here and there where the beer’s most recently been.

Smell (4.5): What a gorgeous mixture of coffee roast, lightly smoky, charred, and a teeny bit acrid, with dark stone fruit aromas of dates and prunes, macerated with raisins and coffee liqueur. Cold brew, Latin America-sourced coffee seems about right here. There’s a floral, grassy, and herbal aroma in there, too, giving the impression of Noble hops, but it oddly works. It really bridges the gap between the fruity/coffee side and the earthy, bitter aroma of raw cacao that hangs out underneath everything else. Mocha chip gelato, too—less sweet and creamy, more coffee and icy. I loooooooove this beer’s nose.

Taste (4.5): So, so smooth and creamy, while still being somehow light. What the nuts is going on here? The sweetness of the beer’s fruity esters (Hiya, Allagash house strain!) provide a rich but not-too-sweet body for the beer’s dark, roasty flavors to play out. Following the nose, raw cacao chocolate brings in a mixture of earthy, florally bitter, kind of dirty (like actual dirt), and somewhat roasty chocolate flavors; the light roast and slightly fruity flavors of cold brewed, Latin American coffee beans mixes well with that cacao, as well. The fruit involved is less rich or noticeable than in the nose, but its profile still resembles the array of dark, pitted fruits and raisins noted above. And finally, the hops do show their face, with bitter floral and grassy notes that very happily marry the coffee, cacao, and ester profiles previously mentioned.

Mouthfeel (5.0): Unreal how smooth and creamy this is, without being heavy. Allagash, once again, shows their unbelievable degree of technical brewing skill, allowing their house yeast to turn this beer into an incredibly tight ship of a drink. The body is smooth and very creamy, thanks more to the pillowy but never aggressive, finer-than-needle-point carbonation than to its weight or heft. It somehow borders on lighter than medium-weight, without being unsatisfying. Meanwhile, the acidity of the roasted malts, in concert with the soft, perfectly distributed carbonation, allows the beer to finish modestly dry. It’s like they’re pulling some sort of magic trick with this beer.

Overall (4.5): “Belgian stout” has always sounded like an unwelcome gimmick to me, and it still does—but to be fair, I don’t think Allagash would necessarily call this beer a stout. It’s a dark, tastefully roasty version of a dry, drinkable table beer (albeit amped up a bit in terms of ABV and somewhat lower attenuation, I’d guess), without sacrificing the Noble hop character of the original style. I say this because it’s not really that much like a stout in its malt character, but rather it’s more like a table beer. The genius of using the Belgian yeast’s ester production to form the rich, fruity, somewhat sweet latticework of flavor that the beer’s roasty and hoppy components drape themselves over is that it doesn’t require the use of really big, sweet, or creamy malt. That way, it drinks lighter and more smoothly, but without sacrificing the smoothness of rich, creamy malt—that part is taken care of by Allagash’s wonderful house strain. Frankly, I was extremely, and happily, surprised by this beer. Now I’m going to look forward to its release around this time every year!

Haunted House pours a deep ebony with a thin , beige foam cap. The aroma is of toasted malt a bit of burnt sugar. The flavor is rich with the same. There is a slight note of espresso. The hop bitterness is moderate and welcome.
The mouthfeel is super smooth. This is a really enjoyable brew.

A: Pours a dark brown/black color with 2 fingers of head that fades down to a thin cap

S: Roasted malt, some nuttiness, caramel, dark fruit, and some light dark chocolate. Some light bitterness in there as well. Finishes with lingering roast and nuttiness

T: Follows the nose. Starts off with the toasted malt and caramel and then picks up the dark fruit, nuttiness, and dark chocolate

O: A very nice dark ale that is quite easy to drink. MF adds to the drinkability. Check it out

A little bit cascadian dark ale , a little bit sweet stout and a lot robust porter and you have a near perfect "Hoppy Dark Ale". 6.66% alc/vol is what makes it spooky but the dense, tan head says it's more than just a porter. Good coffee and stone fruit in the nose - fresh clean malt under some espresso notes. Wonderful medium mouth feel - great combo of roasted malt sweet dispersed by the foamy carbonation. Sharp hop flavors stay in balance with the complex dark grain richness - and balance is the key here. So rare these days this beer offers balance of roasted choco-coffee malt sugars and complex herbal and citrus flavors that seem lightly coated in semi sweet chocolate and coffee dust. Finishes hoppy and roasty and ice coffee-y. I could drinks a lots of this. Thanx Rob T and Allagash.

O: yup, a throwback Cascadian Dark, no question; not reminiscent of any other Allagash brand I've tried... is this worth the 4.99 I spent on one can? - probably not; I've had similar quality for less - but it's still a fine swill (1686)

A- 500ml can pours into a tulip glass with a black body that has some dark brown hues at the edges when in light. A formidable crown rises to two fingers high with a thick and creamy-foamy texture and great retention. One massive sheet coats the top of the glass and webs creep further down below it.

S- Heavily roast grains and hops run the show as expected. There also seems to be some Belgian yeast in the backdrop with spiciness akin to Allagash Black. Similar to a black IPA but with that Belgian yeast influence. Big toasted nut notes, roast barley and dark chocolate blend with piney and citrus hops and the yeast rounds it all out.

T- The aroma suggested it and this makes it feel even more like an Allagash Black that isn't as hefty and roasty with a very obvious hop profile added; and its a great combo. Dark chocolate, coffee, nuts, toast, bread, licorice, milk chocolate and burnt barley balanced by citrus peel, floral and bitter resinous pine hops as well as a touch of spicy and phenolic yeast.

MF- Medium-thick bodied with a creamy and puffy texture. The carbonation is rather high but that texture keeps it soft and it is soft on the palate as well as crisp. Ends with a roasty hoppy bitterness.