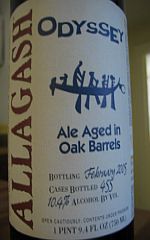 Notes: Allagash Odyssey is a dark wheat beer aged for ten months, a portion in oak barrels and the remainder in stainless tanks. The recipe includes 2-row barley, malted wheat, a generous amount of roasted barley and Belgian candi sugar. This deep brown beer boasts an aroma of black treacle and raisin. The flavor hints at dates, with a mildly roasted finish imparted by aging in both medium and heavy toast American Oak barrels. The finish is dry, punctuated by vanilla.
View: More Beers | Place Reviews
Recent ratings and reviews. | Log in to view more ratings + sorting options.

Pours dark brown with crimson edgework. Decent retention with minor lacing. Oak with rum-soaked raisins in the nose. Medium bodied with a tacky, chewy mouthfeel. Rich malt with toffee, raisins, and booze on the palate. Finishes sweet, warming, and malty.

Rated by erikcx from Massachusetts

Rated by sd123 from Georgia

Reviewed by nick_perry from North Carolina

Reviewed by polloenfuego from Canada (NB)

3.92/5  rDev -7.5%
look: 4.25 | smell: 4 | taste: 3.75 | feel: 4 | overall: 4
Quick review: Pours a beautiful mahogany brown with a nice two finger head. The head is slow to break, and leaves nice lacing. In the smell you pick up light oak, and the traditional candi and dark fruit smells of a BSDA. The taste is light, with the oak not always present. The flavors are okay for a BSDA, nice candi and dark fruits, but still a little light. The feel is medium and the carbonation is good. There is a good dry finish.

All in all not my favorite from Allagash, but a solid beer.

Reviewed by Kendo from New York

A: Poured from the 750 ml bottle into a Chimay chalice. Body is dark brown - almost black (though some ruby hues are noted here and there when backlit) - with a 1-finger khaki-colored head on top. Despite the dark body, carbonation is visible as bubbles rise along the side of the glass.

S: Some dark fruit, roasted malt and a hint of smoke. Not a terribly strong nose, but what's there is appropriate for the style.

T: First impression is the dark fruits - a bit plummy and/or pruney. A bit of burnt brown sugar is noted, along with some cocoa - and Coca-Cola. Finishes with a wee bit of vanilla, but otherwise the oak aging isn't much evident in the taste. The 10.4% ABV (noted on the bottle) isn't really evident at all.

M: A little bit thin and watery, which is a surprise. Makes it an easier drinker, however - and given the high ABV, dangerously so.

O: This is quite good. Curious as to whether the 30 months or so of age on this one have hurt it much, or whether it's allowed the booze to moderate and so may have helped it.

Rated by justme from Massachusetts

Look is a very dark mahogany bordering on stout black. Head is white and fairly retentive.

Aroma is slightly sour brown a oaky vanilla from the barrels.

Beer is a strong brown molasses malt with a smooth vanilla at the end. Slight tang surrounding the taste.

Reviewed by Bierliebhaber3 from Massachusetts

4.28/5  rDev +0.9%
look: 4.25 | smell: 4.25 | taste: 4.25 | feel: 4.5 | overall: 4.25
This American oak barrel aged Belgian strong dark ale pours a very dark brown, almost black, color with a fairly large tan foamy head that has a really great retention. The smell is fairly mild, but is of roasted malts and dark fruit. The flavor is dominated by a bold flavor of roasted grains and wheat with a little bit of smokiness and more subtle flavors of molasses, raisin, and vanilla. There is also a noticeable flavor of alcohol (not surprising since it is 10.4%), but by Belgian strong ale standards it’s actually more measured than average if anything. The finish is slightly bitter to round out the beer with some hops and it is also a little dry. The body is pretty heavy or at least on the high end of medium, making it a little heavier than most I have tried of this style. This is definitely not your typical Belgian beer and it’s not very similar to anything that I have tried previously from Allagash either. It is a truly unique experience and one that I thoroughly enjoyed.
Jun 07, 2016

Smell: There are aromas of roast, dark fruits, plums, and earthly elements.

Feel: It has a heavy feel to it and is highly bitter on the low side.

Overall: It is a complex ale with complex combinations of malts and hops with yeast with significant alcohol warming.

Reviewed by yesterdayfaraway from Missouri