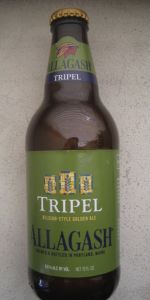 Notes: This strong golden ale is marked by passion fruit and herbal notes in the aroma, with suggestions of banana and honey in the complex palate. The Tripel has a remarkably long and smooth finish.
View: Beers | Place Reviews
Reviews: 1,019 | Ratings: 3,002 | Log in to view all ratings and sort

Typical beer color golden clear.
Nose has malt coriander and orange
Finish is smooth with slight orange.
Overall a really nice beer. Was not expecting so much

#1793 - Blind-tasted except for the beer's name and brewery/country, zero reviews below read (yet!)...
L- Paler than golden, it's into mid-straw territory. Ever so slightly hazy (sediment left stuck to base of bottle) and poured with a 10mm fine-bubble white head that looks like sticking around...
S- Subtle, some antique/aromatic timber notes.
T- BOOOOOF!! I wasn't expecting that! Mega Belgian yeast ester notes, massive - there is absolutely ZERO doubt what style of beer this is. Solid spice notes, mega-banana, dripping in yeasty-esters...
F- Deep complex and yet not heavy or wearisome on the palate.
O- This is front and centre, left, right and behind Belgian yeast notes in spades. Use this on a beer-innocent friend as a solid demo of what Belgian yeast notes can be like when it's really maxed up. Then, I have to remind myself and tip my hat, this beer is not Belgian at all but American. Oh yes, that'll suprise some people, the land of Milwaukee Ice can also yield forth such gems as this. Wow, again, what a wonderful surprise this is....
Review/scoring all done, now the reveal, I get to read the bottle lables to see what I missed! They talk of notes of passion-fruit and honey. Luckily I get neither outright, I just get a reeeeally nice 1 in 50-100 darn superb beer experiences... Wow it's 9%, but it's not shouty about it at all. AND big WOW again it cost £7.30 for a 355ml bottle, jeez!! Well I'm glad I enjoyed it so much.
330ml bottle BB: 22/10/21 (1yr post-bottling date shown). Bought from BeautifulBeers/BurySt.Edmunds as part of a large pick-your own consignment to London.

Opened a large 750ml bottle after it sat out for 20 minutes. Bottled on 5/7/20. Light foam and lacing that quickly disappeared. Nice light golden color with a slightly tart taste and very refreshing and enjoyable. Where does Allagash hide the alcohol?

355ml bottle from Cloudwater Online Shop (£5.50):
Golden with slightly darker tinges in areas & a thin, foamy white head covering the surface with a touch of lacing on the glass. The nose is fruity, slightly floral with pears, a little yeast but it's not overly pronounced really. It's strongly carbonated & light with pear, yeast & subtle citrus before some banana flavours come through. It's fluffy & balanced with the alcohol well hidden & some spice to close; pleasant but there's plenty better Belgian tripel's if go for over this one.

Pours a hazy gold. Light herbal aroma. Big malt and spice flavors. Tastes more like a hefeweizen than a triple. Solid malt finish. It's was quite good.

What a great Tripel! Their parents and knows is pretty basic and understated, but wow... Delicious and super smooth. .. I have no idea where the ABV is hiding on this one, but I'm guessing I'll find out after my second...

Unfiltered gold appearance with a small white head and modest lacing. Yeasty aroma layered with peppery, clove like spices, a bit of citrus and floral hops. Spices remain a recurring feature on the taste buds. Soft fruit more so than citrus,
along with some honey inspired sweetness. Grainy but not coarse mouthfeel. ABV obvious but unobtrusive.

Bottle. One of those beers that your stunned you've never had. Pours a just barely hazed, glowing gold. Persistent, yet thin head. Head is dense and lacey. Dried spices and phenolic elements on the nose. Dry, pale malt. Fruity sweetness. Saw a review refer the nose as smelling like Juicy Fruit gum, which is a great description. Flavor is very stylistically sound but super approachable. I have always had a difficult times getting into Triples. The dryness, booze, and phenols usually threw me for a loop. I have since begun to grow an affinity towards the style but regardless, I can tell this is an excellently crafted beer. Dried apple and banana slices, pear, pepper, Belgian yeast, clove, pepper, hay. Hits a ton of flavors. The booze is set to a level that isn't off-putting yet it lets you know it's present. Not as cloying and harsh as many Tripels. Yeah, I'd say this one can stand toe-to-toe with the beers from the style's motherland.

Drinking this at my favorite tap room in Greenville NC.
Appears golden yellow with a nice foamy head and nice lacing.
Smells fruity and yeasty.
Taste follows the nose nicely no strong alcohol taste despite the 9.0 ABV
Overall a very nice Belgian Tripel that I would definitely order again.

Overall: Excellent quality golden ale. Light and yeast forward. Too high in abv to be sessionable, but it is an enjoyable sip. One of the few Belgian styles I like.

Taste: Like the bottle says ... Passionfruit and honey. Coriander and spices. Blue-Moon-like flavors in a tremendously more sophisticated beer. Sweet but dry, especially on the aftertaste.

Overall: A really fantastic aroma with a smooth mouthfeel and a clear roundness yet softness to the flavor. Phenomenally drinkable. The look, taste, and mouthfeel don't match the top-notch tripels, in my opinion, but the aroma may well. And it is fantastically well balanced. Smooth but flavorful. Just bitter enough but just sweet enough. A great representative of the tripel style.

Golden yellow with a heavy haze. Poured with a moderate, creamy, bright white foam with good retention. Sweet estery banana flavors with sweet bready malt. Medium bodied with soft, medium high carbonation. Lightly creamy feel through the middle followed by expanding boozy warmth that turns prickly toward the end. Sweet banana and honey flavors with light peppery esters emerging through the middle. Medium light bitterness. Finished with banana and peppery esters and prickly booziness that slowly fades. Sweet and spicy esters are well balanced along with a sweet malty backbone. Friendly booziness reminds you that this is a Tripel.

Golden and hazy with a finger of white head and moderate fine bubble carbonation.

It smells of coriander Belgian yeasts.

The taste follows the nose only it’s even more intense loaded with hints of pear and quince.

I love this style and this beer is really good, but not great, for the style.

Pours a hazy straw yellow. Smells of yeast and lots of spice. The flavor is very "belgian" with a bit heavy on the spice, especially cloves. This is a weird critique but compared with the beers I consider "excellent" in this style, it's a bit heavy on the clove-flavor vs a more balanced spiciness. It ends up being a bit "lopsided" in this respect and that keeps it from the top-tier of Belgian tripel's for me.

Still, an _amazing_ style and a very drinkable beer (esp given the ABV!), worth every penny.

O: Allagash does Belgians well, and this is a lovely beer. One of the better American tripels out there.

12oz bottle. Poured out a cloudy, golden yellow color with a small, off-white head of foam. It left nice lacing on the glass. It smelled of candy sugar, spices and caramel. Sweet caramel and yeasty taste with spices. Crisp and smooth mouthfeel.

Wow! This is an excellent Belgian style ale.

I've finally been directed to banana as a part of the recipe of Belgian style strong pale ale/tripels. This is my favorite style of beer but I've never liked banana. But yes it is there in this brew and most in this style. It's been a blind spot. Hard to reconcile. Makes it more of a masterwork to get me to like anything with banana and continue to cherish this style of which Allagash masters. Duvel remains #1, La fin du monde #2, Allagash #3

*Poured from a 12oz bottle into a Teku glass*

Poured an attractive hazy honey-yellow, had a thin lace of white head with not a whole lot of retention. There were a good amount of yeast and protein particles floating around, which might be frightening to people unfamiliar with this style.

Predictably, this was pretty yeast forward beer. Had a rich smell of banana and cloves, with a hint of some canned apricots and mandarins. Also got a bit of its hop character presenting a light hint of grapefruit and oranges. Very rich, vibrant, and satisfying.

Similar to the aromas, I was hit with a big yeasty taste of bananas, cloves, ginger, and cinnamon. While the spiciness of the yeast took over the majority of my taste buds, I did pick up on a small bit of fruity characters such as pears, citrus, and apricots. Later on, the taste kind of devolved for me, and became a little too rich and heavy. Probably won't be able to drink more than a bottle of this at a time.

For 9% ABV, this was dangerously drinkable. I barely got any hint of an alcoholic taste in it. At times I felt as if I was drinking straight juice. Which might be good or bad depending on what you look for in a beer. It had medium body with a medium-light carbonation which made for a creamy smooth feel and finish.

TLDR; a very nice and refreshing Tripel. Very yeast forward presenting spicy notes of cloves, ginger, and a bit of cinnamon while also presenting some fruity esters such as bananas and oranges. At first, the feel is smooth and medium bodied, making this a creamy, rich, and refreshing Tripel, however, it might feel too rich and heavy for you the more you drink it.

Outstanding representative of the style. Prior to this, my only Allagash experience was with their white beer, a style of which I'm not the biggest fan. But their Tripel delivers on all cylinders... and it has an unusually high drinkability, something which we can't say about most of them. (Side note: I'm drinking this during the height of the COVID-19 lockdown; I sure hope the package store I bought it at will still be open on Monday, I need more!!)

I love this Maine version on a Belgian Tripel...golden on the pour, slighty cloudy with a big pillowy head and wonderful lacing. Smell is sweet malt, yeasty, with light herbal hops. Notes of honey and banana. Taste is smooth but complex, finish is dry. One of the best triples at a great price. This is one of my new favorites!