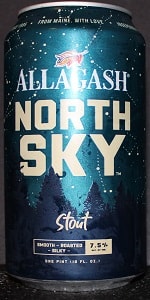 Head retention is strong and it has a good amount of fizz.

The after taste has notes of malt,
nuttiness, and, molasses. Not the best Allagash makes but a soild dark beer all the same.

4.18/5  rDev +5.6%
look: 4 | smell: 4 | taste: 4.25 | feel: 4.25 | overall: 4.25
A wonderful choice to go with Super Bowl snacks!!! Poured from a 16 oz can into a pint glass, North Sky features a dense dark brown color, a big frothy tan head with great retention and plenty of lacing. Aroma and flavor don't disappoint either!!!! Rich malty backbone, elements of coffee up front and chocolate as the beer warms and a little lactose for smoothness. Very tasty and aromatic. Mouthfeel is rich and smooth, not much noticeable alcohol. This is a really good stout!!!
Feb 14, 2022

Rated by izraelc from New York

Pours a thin-appearing chestnut brown, chestnut highlights, with a two-plus finger head of mocha fluff. Retention is pretty much forever, with fat gobs of lacing.

Nose is watery with a metallic tang. Aromas of acorns, paper, copper.

Tastes something like what I’d imagine nut-and-twig tea would taste like. Thin roasted nutshell bitterness and a faint saccharine sweetness.

Feel is silky-smooth, creamy, light-bodied relative to the style with fine, buoyant carbonation.

Overall, it’s OK. It’s thin and super-easy to drink and I’d never have guessed that they’d hidden 7.5% abv in there. Label text references evenings around a crackling campfire and that sounds about right.

3.99/5  rDev +0.8%
look: 3.75 | smell: 4 | taste: 4 | feel: 4 | overall: 4
Everyone is familiar with the classic Allagash. A great light and refreshing beer. However they turned out the lights with this one and I love it. I’m the stout/Porter guy and I know a well done stout. This was wonderfully roasty with a great sweet balance to it. Chocolate notes tickle the tongue and leave you feeling warm and satisfied.
Jan 28, 2022
Rated: 4.18 by TWStandley from Massachusetts

This is pleasant enough, but it doesn't have the richness I expect in a stout of this strength. It's a very soft brew. Sort of a strong (ABV-wise) dark mild ale.

Pours two massive fingers of pillowy brown head into my Willi glass. Retention is average-good, the head fades at a steady rate, but settles into half a finger for quite some time. Initial lacing looks pretty good. Body is pitch black, with minimal hues when held to the light. Looks pretty nice so far.

Nose has an English feel to it at first, dry, slightly roasty. After a few minutes I get a significant Belgian character, nice fruity esters, spicy as well, cinnamon even. A nice malty sweetness and chocolate comes out as well. Smells great.

Small spice on the flavor, cinnamon comes out as it warms, faint fruity esters. Roasty malt, touch of chocolate. Slightly underwhelming potency, but it’s got decent complexity and it tastes pretty nice.

Carbonation is medium-light, pretty soft, which seems appropriate. Body definitely has a little bit of weight to it, a little over medium. A delicate sweetness. Bitterness is very subtle, but provides a nice balance. Mouthfeel works well.

Drinks very nice, it’s pretty well balanced, with a touch of sweetness that isn’t cloying, and a tasty undertone.

Appearance turned out pretty decent. A clever edge of foam hung around the top of the body for most of the beer. Lacing was very patchy, but not bad.

Overall a solid beer that got deeper the longer it had to breathe and warm up. Still mostly subtle flavor additions, but those made for a good complexity and overall yummy beer.

Reviewed by kp7 from Massachusetts

4.23/5  rDev +6.8%
look: 4.5 | smell: 4 | taste: 4.25 | feel: 4 | overall: 4.5
Canning date 5-13-21.
Text book appearance - clear but opaque, deep brown under a doeskin tan head of fine bubbles. Smears of sticky lace and a tenacious film of foam persists, dense like a nitro Guinness.
Aroma is also classic export stout - sweet and scorched notes of molasses and roasted barley, fruity esters of plums and berries. Very little hop spice in the nose - it's all about the malt blend.
The flavor is subtle and luxurious - sweet, roasty and toasty. Lots of cocoa and toffee notes, coffee and brown sugar on granola.
Excellent grain character and complexity. Hop bitterness comes in late and blends beautifully with the black grain dryness though I could use a bit more hop bite in this, it works fine the way it is - unique and old school.
Mouthfeel is medium bodied with the 7.5% almost completely hidden in the rich mix of charred malt and restrained hop rate.
A truly excellent robust stout from one of Americas finest brewers.

4.14/5  rDev +4.5%
look: 4 | smell: 3.75 | taste: 4.25 | feel: 4.5 | overall: 4.25
It's close, but it's just not quite as black coffee brown as most stouts. It's more like a dark cola beverage. The fringes certainly show hints of mahogany. The color is bright and the body is opaque. A light tan, somewhat foamy head rose to the top of the clear glass Imperial pint mug. Now no longer within a pint can, the aroma can be determined. It's malty, without the roasted aspect of most stouts. With it can be found hints of the type of yeast used in Belgian styled ales. There is a creaminess to the mouthfeel from onset through the finish. There's good balance to the taste, with just enough pleasant roasted malt character to prove it is a stout. The yeast is barely noticed by the palate. This could be considered a semi-dry, rather than dry stout. Despite the creamy mouthfeel, this is politely light on the tongue. The glass lacing was unspectacular, but not really considered as a demerit.
Nov 30, 2021

4.36/5  rDev +10.1%
look: 4.75 | smell: 4.25 | taste: 4.25 | feel: 5 | overall: 4.25
Black with some reddish-brown highlights, dense khaki head, great retention, rings of lace
Earthy roast with some cocoa and spice
Smooth roast with a bit of fruit and spice
Medium-heavy bodied with appropriate carbonation
A tasty stout that has a unique flavor without added flavors

3.79/5  rDev -4.3%
look: 4.5 | smell: 3.5 | taste: 3.75 | feel: 3.75 | overall: 4
Poured from a 16oz can dated 09/01/21 to a diagonally cut tumbler at approximately 45F.
The body is near black, but reddish at the edges of the glass when held to the light. This beer has an impressive head that is puffy, rocky and deep-tan with multisized bubbles. The head clings to the glass well all the way through the session.
The aroma is not as impressive, nothing but must really; maybe some sense of the Belgian yeast.
The taste is better- Dry start with a hint of chocolate with the Allagash yeast coming through. The finish has plum notes.
The body is a little thin but somehow works with the flavor profile. Despite the large head (or maybe because of it) the carbonation is about right.
Overall this is a departure from stouts I normally favor. Its not special to me, but pretty good for what it is.

Reviewed by evanwoertz from California

Pours black in the glass but a translucent dark brown in the stream. Head is fairly small, creamy looking. Moderate amount of visible carbonation. Very thin skin of head floating in broad island on top of this beer. Smell is super roasty, definite coffee notes. Maybe a little anise and chocolate.

Taste is clearly roasty but not a slap in the face; coffee and chocolate are also there. I would say it's a very nice, restrained profile. Dark roasted malt sweetness comes through.

Mouthfeel is tending toward thick and chewy. This is a really nice stout.