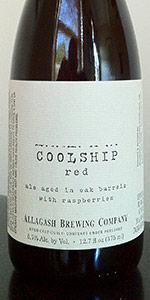 A- A slightly hazy bright ruby red with a small pink head.

Cracked at fridge temp and the gorgeous smell immediately escaped the bottle. Pours a beautiful reddish pink with very little head (despite an aggressive pour). Nose is dominated by raspberry. Also getting really nice notes of vanilla, funk, oak, and raisin. Taste is mouth puckering sour upfront. Wow! Tart, sour, raspberry, tree, oak, vanilla, yeast, and maybe a bit of sherry. The taste lingers on the aftertaste for quite some time. Such a gorgeous mouthfeel - somewhat dry. Overall, this is an outstanding beer. One of my favorites of this style from an American brewery.

7 ounce draft served in a juice glass, which doesn’t seem like the best choice.

Lots of raspberries, some funk, a decent amount of tart and sour. It’s good, but fairly straightforward and not as complex as other highly rated wild ales/sours. Was expecting this to be much better.

I found this less subtle than the 'regular' Coolship, which was a revelation for me. Fruit forward & enjoyable, but a bit one-note.

The base beer is a delicate beauty, best enjoyed on it's own. This will do in a pinch though!

Not quite as tart as expected. Bottle says 6.2 ABV so perhaps the recipie changed. Definite oakiness, well defined raspberry with the mustiness of red wine. Not really the sour I’m looking for unfortunately.

Been hunting this one for years. As Captain Ahab quipped, "this is what ye have shipped for men! To chase that white whale on both sides of the land, over all sides of the earth!" Beautiful ruby red pour that glowed in the sunlight, with no head after initial surface carbonation. Smell was the star: deep raspberry both fresh skins and sour insides, beautiful oak full of character, wheat, vanilla, wild flower, wild belgian yeast, apricot, and red wine barrel influences. Taste is way more subtle, but not really any less complex or beautiful, just wanted a little more bite like the belgian lambics do on the finish. Simultaneously vinous, sweet, tart, boozy and funky. Well worth the hunt, but does not compete with the belgian lambics of fame

Would I buy this again? I would buy the full allotment! Literally cases if I could get away with it.

Easily one of the best beers Ive ever tasted.

A: Pours a purplish-red with a cap of tight white head. Excellent retention.

T: Lots of fresh raspberry, light oak, moderate tartness which is cut by a decent amount of fruity sweetness. Mild earthy funk rounds out the palate and adds some complexity.

O: Tasty stuff, nice Brett character and toeing my limit of sourness without going over.

L -- Pours a lovely hue of red with modest clarity and a half finger of rocky white head produced with moderate pour. Very minimal retention or lacing
S -- Raspberry jam, raspberry leaf, tart apple, oak, bretty funk, lemon, strawberry, sweet floral. Beautiful and clean -- on par with the clarity of aromas found in Peche n Brett (although obviously very different)
T -- Largely follows the nose. The raspberry character really balances out the lacto-forward tartness nicely: it's not acetic nor does it just taste like a fruited gose
F -- Medium- mouthfeel, medium+ carb. Flies off the palate quite quickly for the style, which makes it all the more refreshing
O -- This is a fabulous fruited lambic, and one of the best naturally inoculated beers I've had, period. Pricing is very high, but it's worth it
(cr)

Definitely a solid offering, but frankly I had higher expectations. I much prefer other Allagash similar offerings like Bizou (only at the brewery) and Nancy. Either way, a solid beer.

Smell comes across as oaky, acetic and vinegary, but also floral and fruity with tons of red raspberry.

Taste is quite sharply sour, very very potent of malic acidity, verging into acetic, but also full of bursting raspberry juice, as well as some toasty char and a little balsamic lemon glaze.

Nicely effervescent, satisfyingly so like champagne, but that quickly dissipates to a slick medium body with a stinging, semi-dry swallow. It gets far more acidic and sour as it warms, to its detriment.

This one pours a light pink-ish red, fully clear, with a small head, and a little bit of lacing.

There's a lot to unpack with this beer. It's probably the best beer I've ever had from Allagash- and that's saying quite a lot, as they make awesome beer. The raspberry flavor is bold and beautiful, but miraculously doesn't dominate, as the base beer is slightly prickly, with a warm musty barnyard funk- earthy but inviting. There's some nice oak and red wine flavors as well. This is just so well rounded.

This is light bodied, and really crisp and clean, with a good level of carbonation for the style.

This is absolutely a home run, and one of the best fruited sours in the country.

In many ways this is the beer I’ve been journeying towards since diving into craft beer. A beer that, had I encountered it a few years ago, I would’ve undoubtedly enjoyed it but not to this level of depth.

This beer is unreal.

Sunset-red with an eggshell-white head that fades quickly. Raspberry personified.

Aroma is raspberry purée, leather, green apple, lemon, tart berries, oak and musty attic. Just an incredible aroma that speaks to the complexity of the beer.

Taste is simultaneously tart and fresh fruit and aged woody and earthy ale. An incredible juxtaposition. Fruit-forward and jammy but restrained from the sour blend. Toasted malt in the background, leather in the mix.

Bottle: Poured a reddish color beer with a nice pink foamy head with limited retention and some light lacing. Aroma of tart notes with cherry notes and light oak presence. Taste is also dominated by tart notes with cherry and oak notes with some more dominant then expected acidity. Body is about average for style with good carbonation. Enjoyable but maybe more acidic notes then I cared for.

Overall: Mama's fresh cherry pie on the farm, taken in late summer over lunch in the cool shade of the barn, with the grassy aroma of a fresh hay cutting in the breeze.

Pours a beautiful strawberry red, with a small pink head that quickly dissipates. Lots of lively carbonation can be seen.

The aroma burst forth with raspberries, but there's a lot more going on here! Pie crust, must, cobwebs in an old basement, and bright, citric acidity. Freshly cut hay is there, but then gets overtaken by cherry and raspberry pie! I could get lost just smelling this beer! Delightful!

Acid and funk play off each other, while the raspberry plays a secondary role. The resident microflora are the stars of the show here, and they put on quite a performance. It's quite puckering, but also dry, which brings you back for more. Raspberry and crusty malt round this out well.

Fairly bracing acidity, with a fairly full body for the style and abv. A good amount of carbonation, and a dry finish.

This really is a treat, and proof that not all American Wild Ales aren't just sour bombs, they can have deep complexity, reminiscent of Iambic. That said, if they could slightly dial back the acidity they would really have a beer that rivals the best sours in the world!

F-medium tartness that lingers a little harsh. Funky and drinkable

Absolutely fantastic. The body is a bold bright red, the nose funk and sweet raspberry, and flavors are firm berry tartness, strong oak, and almost sea salt. Coolship red is a true pleasure.

Pours a maroon, cloudy body with a small pink head that reduces to leave a ring of retention.

Aromas are out of this world, heavy raspberry and tart lactic, funky and light oak. berries to the max! On the tongue it’s lightly tart and effervescent, dry raspberries and yeasty funk, maybe a bit of oak on the finish. Crisp easy drinker, light body. Finish is yeasty.

Too sour to find the nuances in this beer. Seems like a load of fruit but unable to really appreciate it because of the intense warhead-esqe pucker. Also, overly carbonated for my taste.

The hazy, light magenta body was capped by a finger tall, bubbly, bright white crown that slowly faded to a lasting ringlet. No lacing whatsoever.

Berry notes came through big time in the nose. Not sure if this was a cherry or a raspberry beer initially. Somewhat tart yet also sweet. Slightly medicinal perhaps. Soon, the fresh raspberry notes took over. Really pure, bright and fragrant. There was a slightly powdery and dry yeastiness. Bit of lemony tartness as well. Spectacular.

Raspberry notes dominated in the flavor profile. Tart and fresh. Sour but not overly so. Slightly funky. Wheaty and lemony in the center. Touch of lemon rind on the back end. More raspberry too. Raspberry seeds perhaps. The finish was sour and dry without being too intense. Hint of oak.

Frothy, fluffy mouthfeel. The liquid was highly carbonated and contained an intense, large bubbled effervescence. Crisp and sprightly on the palate.

There is usually a distinct difference between authentic, naturally fermented Belgian fruit lambics and their American counterparts, but Allagash's Coolship Red tasted like the real deal. This brewery might be the only one in the country that has mastered the art (and science) of using a coolship to achieve such nuance and complexity in their beers.

I love raspberries, so this review is a bit biased toward this beer. That being said, Red is my favorite Allagash product to date. From the moment I popped the cork, the raspberry aroma punched me in the nose & I knew it wouldn't let me down. Pours a nice red, perfect tartness & that raspberry flavor is just incredible.