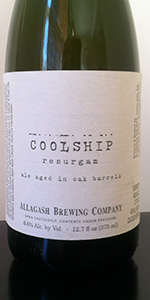 Notes: Coolship Resurgam is brewed with Pilsner malt, raw wheat, and aged hops. The beer is cooled overnight using outside air temperature in a traditional, large shallow pan known as a coolship. During the cooling process, naturally occurring microflora from the air inoculates the beer, and in the morning, it is transferred into French oak wine barrels where the entire fermentation and aging takes place. Coolship Resurgam is a blend of this one-, two-, and three-year old spontaneously fermented beer. The finished beer has aromas of apricot, lemon zest, and candied fruit. Notes of tropical fruit and flavors of funk lead to a clean, tart, and dry finish.

Coolship Resurgam is a blend of both old and young unfruited spontaneous beer. The name comes from the motto of our fair city, Portland, Me. It means "I shall rise again". Coolship Resurgam won a Silver medal at the 2010 GABF.

a blend of this one-, two-, and three-year old spontaneously fermented beer. The finished beer has aromas of apricot, lemon zest, and candied fruit. Notes of tropical fruit and flavors of funk lead to a clean, tart and dry finish.

This pours a hazy straw gold with a billowy cap that dissipates rapidly. Stone fruits galore, with a drying finish. Tart and fruity. Amazing.

Picked up at the brewery in early October, bottled Nov 7, 2018 so just about a year old! Had no idea it was bottled this long ago. Either it wasn’t selling at the brewery or they put it out in the store after some serious bottle conditioning. For an “American Gueuze” this is really, really good. Massively funky nose and equally funky flavor. Barn, hay, yeast, hops, fruit....it’s all there. Super dry and effervescent feel/body yet surprisingly smooth, clean, and refreshing in the finish. A big fan of this beer, glad I picked up this special bottle. When I saw they had a Coolship beer in the store I didn’t hesitate nor even look at the price, and I was not disappointed.

Pours a moderately hazy amber-orange with a small head and a lot of carbonation. Smell is tart and oaky, lemony.

L: Had this on-tap at Capital Ale House - Innsbrook, poured into a snifter glass. Had a golden yellow-brown color and a slightly hazy consistency. There was a quarter inch of foamy, somewhat long-lasting head. Fair lacing.

T: Tasted of some Belgian-style yeast (a fair-sized component), a bit of apricot (just enough), lots of apples (the dominant force), some citrus fruit (lemon, in particular), and some light tropical fruit notes (mango). This is a funky, light and complex flavor. It definitely has a vinegary quality, but it somehow works. Pretty tasty.

F: A good amount of carbonation with a lively finish. Medium-bodied.

Had on tap. Brighter golden brown with some bubbles as an outer ring. Horse blanket funk: the beer. Through and through the funk carries the smell, taste, and feel. Plenty of oak, barnyard funk, apple, lemon, lacto, biscuit malts, with earthy and herbal undertones in both smell and taste, with the smell being extremely potent. Taste is a touch sweeter, and the funk is not as strong as smell, but still the clear star. More smooth and refined than traditional gueuze, miss the harshness a little. Plenty of funk and oak tannins in the feel too.

On draft at an Allagash event at Cambridge Common. Golden amber in the glass with a thin crown of bubbles. Smell wafts out of the glass with strawberry, apples, red wine vinegar, a hint of funk. Very inviting aroma. Taste is strawberry vinegar, dry hard cider, red wine vinegar, maybe a touch of leather. Tart and vinegary, but not too sour, leaving a nice pucker and finishes dry. Light bodied and low carbonation, but with a long finish. Overall very nice.

On tap into a tulip glass. A hazy golden color with a thick and long-lasting white head. Complex, with funky overtones and a slightly tart citrus fruit flavor. Floral and grassy notes as well. Serious funk on the finish. Outstanding.

Tart mango, dry yeast & orange peel flavors. Citrus forward but balanced...this was delicious, and the older vintages I've had are even better.

A classic American take on one of Europe's greatest gifts.

Vibrant, hazy orange-gold with a half finger of short-lived, near-white head that settles into a crown and leaves almost no lacing.

Just a little of that light floral, citrusy flavor — with some pear juice, too — shows up front in the taste. Sharp sourness with a little funk dominates the backend, contributing to a dry finish. There’s a definite apricot skin impression.

The softness of the feel and the fruity flavors are a little different from other gueuze I’ve tried. The sharpness of the dry, sour edge is more traditional — maybe a tad heavy-handed, but still delicious.

This is incredible and ranks up there with beers I've had from Cantillon and 3 Fonteinen. Tart, apple, funk. And refreshing as hell.

hoppytobehere from District of Columbia, Jan 07, 2019

Deep golden in the glass, spontaneously fermented in open air like its Belgian brethren. Just when you think this beer is going to give you the tart facial wince, it stops there with a rush of fruit flavors. A+ for style points!

Real nice aroma. Touches of soft oak almost cake like with soft acidity of fruit apricot and peach. Lots of soil earthy tones on this as well.

On the nose, I get green apple, dry white wine, subtle oak, and zippy funk.

The taste opens with green apple, peach, and pear and finishes with pilsner malt, generic hops, and firm lemon rind. The mouthfeel is dry, with some fleshy/juicy impressions layered on top.

Overall, 4.25/5. The pilsner malt and generic hoppy character kind of drag down the fruit flavors, but it's ultimately a very well-crafted beer.

Big on flavor. Lots of tropical fruit and funk, but honestly the beer could benefit from a little subtlety. Its flavor is a little aggressive but it's still enjoyable in small doses.

Pours a clear to hazy slightly tarnished brass color. Generates a finger of white sudsy head, that sticks around surprisingly long, before receding to a spotty film and thick collar. Dozens of beautiful streams of ultra-fine carbonation are feeding that collar.

Nose has that signature Allagash barrel treatment aroma, with notes of apple, white grape, pear, french new oak, and some light mulling spice. Clove, cinnamon, as well as some lesser allspice, nutmeg, and maybe even a touch of anise. Some yeasty barnyard funk as well. The nose actually presents itself much like a wild fermented cider.

Palate shifts quickly into the funky side. Simultaneously, I'm getting Lactobacillus, Brettanomyces, and Pediococcus character. Some citric tang, some musty overripe bitter, and some acetic bite. Not in that order, no. Lacto tang first, then the acetic bite, and then the brett. It's incredibly complex, with an ever-shifting flavor profile that flashes by in countless waves. A sign of a good wild ale. Alongside the dominant year and bacteria character, I am getting that tart green apple, some pear, white wine, new oak, and mulling spices. There's a very vinous feel to the whole thing. Drinks like a very sour white wine. Some very slight hope notes are tucked in as well. There's just so much going on, and so many flavors and interpretations, it's impossible to adequately describe. Finishes fairly dry, and woody.

Mouthfeel is light to medium light bodied, with a fair to moderate, fine and fizzy effervescence to it. Mostly dry. Reminds me quite a bit of some Flanders red ales.

Overall, I have to give this ale credit for its vast complexity. Perhaps the most complex wild ale I've tried. That being said, even as a fan of wild, funky, and sour, this one leans a bit much for me, particularly on the acetic/vinegar side of things. I generally prefer a more lactic tartness, or musty brett, or just straight up barnyard funk. The acetic sharpness is what gets me, and this one is testing my limits. Had this not been as "vinegary", it'd be stellar, but ad it is, I find it to be a little too sharp, and off-putting. Nevertheless, I can appreciate the complexity of this offering, and I'll go easy on my ratings, because many people are looking for that bite in the style. I went out of my way to get this, and saved it for some time under good conditions, and I'm a little regretful that I didn't go for Cerise. Oh well, maybe next time.

Poured from a dated 8/21/2017 into the test glass
A - A slightly hazy straw color, conceals lazy carbonation. a thin ring of white resides along the glasses perimeter throughout the experience.
S - Sharp start with the acidic side of lemon, funky wet straw, dry white wine, pith, and dusty dirt cellar (in a good way), back to zest of a lemon, and Loire valley wine.
T - After that aromatic introduction, the flavors are more mineral, less tropical fruit, certainly the zest of lemon, but less dominant than the nose. Nice grainy element, tart candied fruit, chalky white wine, and the slightest hint of sulfur, whit peach wraps this up.
M - Medium in body, tart and sweet in near perfect tension, ashen dry finish, with a lingering tangy orange candy Spectacular.
O - What a complex and delightful offering, The body, carbonation and acidity make this a real treat. The aromatics are out of this world. So glad that our favorite shop was able to get some this year. Worth every effort to find

Very solid offering from Allagash. I actually prefer this to the Coolship Red. Tastes of citrus with some additional smokiness. Pricey, but a solid beer and worth a taste.

a beautiful looking brew comes with aromas of apricot, lemon, and earthy moss. some mellow sweetness on the nose as well. on palate there is a bright acidity and clear notes of apricot, pithy lemon peel and citric quality, hay, grassy, mellow must quality invoking moss and earth. bready and fruity yogurt flavors throughout, superbly crisp.

Perhaps the best spontaneously fermented beer available in the US, and one of a handful of wild ales I consider MUST DRINK when new batches are released. Absolutely outstanding, near-flawless execution.

Aged for a year

S: Orange flesh with moderate smoke/char (?), light floral and funk.  T: Pretty floral with some light citrus and moderate funk to round things out on a long finish. A little smoke. Moderate pucker that’s balanced by the other elements. Pretty dry.


Coolship Resurgam from Allagash Brewing Company
Beer rating: 96 out of 100 with 897 ratings