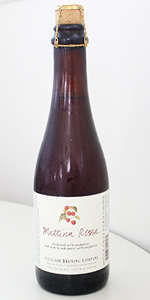 Notes: Mattina Rossa is a beer that was a long time in the making. It was brewed in August of 2008 with a base of 2-Row malt and 440 lbs of local raspberries in the mash. It was then conservatively hopped with Tettanang, German Tradition and Saaz and fermented with our house yeast strain. Shortly after primary fermentation, the beer was racked into eleven red wine barrels, nine of which were inoculated with either Lactobacillus or Brettanomyces "Allagensis". After one year, we placed an additional 100 lbs of local raspberries in five of the barrels. The beer continued to age for an additional year, at which time the barrels were blended to strike the desired balance of fruit and funk.
View: More Beers | Place Reviews
Recent ratings and reviews. | Log in to view more ratings + sorting options.

Smells like raspberry jam, fresh boiled sweet corn, maple syrup, cream brûlée and fresh oak. Wow, what a nice fruity and sweet smell! It’s dark beige to brown color. There’s coarse foam for seconds, and then it only shows submerged bubbles on surface of glass. It’s medium body, a bit sticky like juice. The beer is very tart, like a lemon’s acidity. This is a very flavorful sour ale, which is the type I like (say Russian River brewing’s supplication). I can sense strong tart raspberry, pomegranate juice, lightly funky balsamic glaze, a touch of salt, caramel candy, dried apricot, tart Cherry pie, wild jujube juice aromas. This recalls the practice of preserving tart fresh fruit with sugar, making jam for the rest of a year. This sour ale definitely shows that, I get the maple syrup like thick and even lightly caramelized sugar diffused into raspberries. And the almost as strong as vinegar acidity unleash a vivid naughty fresh fruits’s youthful soul. It’s a very nice sour ale, worth this long wait. It’s interesting that the beer actually tastes like wild (tart) jujube juice which used to be popular in the city I grow up. The beer shows some residual sugar, which balance the tart when it gets warmer. But I do like the sharper tartness when it’s colder, because if you give it some time to flow around in mouth you also pick up those complex fruits aromas. We can also think it’s wine like, a tart wine if it is a wine, it does have the fruitiness, jammy, bloody but not very smoky or tobacco like. So it’s probably a Merlot in that sense. The weather is so comfortable right now, no smoky air around, so I really enjoy this well deserved master piece. Sep 26 is Zwanze day, I never get a chance to enjoy it in person. But have a nice sour (although this is not natural yeast but an ale, but close enough) and time to taste it are so nice. The aftertaste is actually a bit peppery, like some mushrooms which you may eat, but those earthy peppery seems common in our nature’s wild yeast (fungi technically are not yeast). Oh, now I want to have a Rodenbach Grand Cru! This is definitely more fruity, but it also shares the wine spirit like a Flanders’ red.

Bitingly tart strawberry flavor up front; soda carbonation on the finish. Nice fruit notes but a bit punishing on the tartness scale

One of my favourite raspberry beers, Mattina Rossa strikes the perfect balance between brett funk, red wine character from the barrel treatment, and fruited sweetness.

L - peachy rose like fairly clear. White head that quickly dissapates.
S - this is the bomb diggity. Raspberry pie, very jammy. Reminds me a lot of Rodenbach. Acidic in the background. Minimal lemon and minerality.
T - initial taste of light raspberries followed by acidity, minerality, lemon. It is acidic, but not as intense as some have said in my opinion. I had this batch fresh and think somehow the acidity is more mellow now.
F - light carb, easy drinking.
O - good raspberry wild and Allagash wilds are fantastic, but do not think this is in the same class as their coolship beers.

This is a 2016 vintage bottle. It pours with a superb clarity. Golden red in color with no appreciable head.

Smells raspberry, vinegar...hmmm, maybe raspberry balsamic vinegar. Plenty of it on the nose. A bit of funk, a little lemony, red wine. Kind of a jammy sweetness. Interesting.

The taste is bracingly sour early in the glass. Probably won't peel paint, but certainly delivers a slap. Almost the intensity of sour Skittles, I reckon. Sharp, clean sour. The raspberry...at this point not a fresh raspberry flavor, tending toward wine-like with jam sweetness. There is an acetic note that flies by quick. Red wine comes through in the finish and as the beer warms up, it becomes less...I dunno...startling? Either I am adjusting or temperature is doing the Vulcan flavor meld here. Likely both. The funk is pretty restrained and essentially plays a minor role in the flavor.

Minimally carbonated, yet it feels a little tingly. While there is some sticky raspberry jam feel, the finish is acidic and clean. Quite dry.

Liking this quite well, but it took a bit for it to grow on me and for me to understand it. If you don't like raspberry, pass on this one

A: Pink orange with some golden hues - some clarity - pours with a small, white head, fades to virtually nothing but retains a small collar, leaves some small spots of lacing

S: Bright, juicy raspberries and acid - tart, fleshy raspberries, like smelling a bowl full of raspberries - sharp sourness with some acid, some lemon - other fruity notes, like cherry - some funky, lightly musty notes, but they are really overpowered by the bright acidity, which I think works quite well - notes of red wine - some barrel, but with the funk, it's really second stage to the raspberry

T: Imagine biting into a super-tart, sour raspberry, and you've mostly captured the taste of this beer - so, so much raspberry - raspberry flesh and juice - some sour cherry and a spritz of lemon acidity - very sharp sourness - some funky notes, Brett funk, and barrel funk, but the highlight is the acidic aspect - some red wine, dark fruit - complex layers of sharp fruit and funk - some light sweetness at the base, some pale grains - edit: the acidity gets fatiguing, even with a 12 oz pour, almost becomes too much

I had this at a BA fest years ago, and it the people pouring explained that the beer wasn't ready yet. But it was stellar. And this is also stellar. I'd say this is on the same tier as the Allagash coolship beers, but it's so sour that it's almost hard to drink.

Enjoying a nice summer lunch, out on the deck after a day at the beach, consistingof a tuna salad nicoise and grilled vegetables. I reach for a sour ale for refreshment and hoping that it pairs well with the meal. It does!
Mattina Rossa pours an evocative hazy amber and raspberry color. Looks a bit like a Rosé wine. A thin film of bubbles soon disapates but does leave a ring like collar and lacing.
The first whiff packs a fleeting glimpse of funk. However, this brew's acidic qualities almost instantaneously overpower the funk. There is of course the presence of sweet and sour raspberries as the centerpiece. Furthermore, the aroma of sour grapefruit pulp, lemon, sour cherry and wild yeast contribute to the acidity of things. A touch of wheat malt and fresh hay lingers in the background.
Drinking this brew unlocks all types of sensations redolent of diverse culinary and drinking experiences. The most obvious is it's acidic components. Lemon, wild yeast and tart citruses are one part of the equation. The other is that the mouthfeel has an oily, wet, vinous and balsamic vinegar quality whose acidity makes me cough. Now this might sound like an undesirably quality, however, you're talking to a man here that loves to drink leftover salad dressing on its own. Another obvious quality is the raspberries which impart an understated coating of sweetness and balance. There is so much in this brew that render the body medium and even chewy. The finish is quite dry.
I was quite impressed by this brew. It has one of those flavors that I'm still thinking about on the next day. A magnificent brew I can't wait to get ahold of again.

A: Lots of bright raspberries upfront, with a moderate sourness and very faint malts.

A: Reddish-pink color with an orange hue, hazy, with a moderate uniform what head that has decent retention, before forming a film across the glass.

O: Lots of layered raspberry aromas and flavosr that is well complimented by the clean sourness. Easy to drink and quite refreshing.


Mattina Rossa from Allagash Brewing Company
Beer rating: 97 out of 100 with 473 ratings