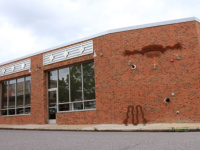 Notes: Beers should only be added under the Tired Hands Brewing Company page.
BEER STATS

One of Tired Hands' two drinking venues in Ardmore. It's a large, modern facility that is typically jammed with a raucous crowd drawn by the excellent beer and atmosphere. It's loud, boisterous, and fun. The lines can be long but you don't mind. They serve pours and growlers and sell cans and bottles at this location. Tired Hands is very adept at brewing unique sours, as well as first rate IPAs. The staff is friendly if a bit overwhelmed at times. The food is mostly pub fare but well cooked and tasty. It's a fun place to visit.

Fantastic visit to the Fermentaria, which houses the brewery, a bar and restaurant under one lofted roof. The food was solid and creative, featuring tacos, sandwiches and New American fare entrees. The beer selection was large, offering at least 12 beers at 4, 8, 16, 32 and 64 oz pours. Plus, the back of the menu features a wide selection of their large format bottle beers to enjoy. Server was friendly and knowledgeable, with time and interest in geeking out over beers and brewing process. Good stuff all around and a worthwhile visit if you're in town.

Big, airy space with lots of natural light coming in. Long bar that seats around 15-20, and lots of seating, restaurant-style with table service.

Tap list runs about 12 beers, with a few staples like Hop Hands and Saison Hands and lots of rotating stuff. Good mix of styles, with everything from lager to stout accounted for. Several sizes of pour are available, which is always welcome. Quality of the beer was as good as it's supposed to be at the source. Service was quick, friendly and attentive, but not pushy at all. The bartender was happy to chat when he wasn't too busy.

Service in the seating area was just as good, quick but not intrusive.I didn't have food, but my friends did, and it got high marks from both of them.

Overall, a really cool place where I would be a regular if I lived anywhere near there.

Solid place. Bartenders very knowledgeable. Large and friendly space and near the Ardmore train station. Would highly recommend if you are in Philadelphia.

Visited on a Sunday with some local friends of mine. Nice, modern bar and dining area with views into the production area. Crowded and a bit chaotic when I was there. We waited a long time for a table and meanwhile the bar service was not overly quick or friendly. Food was good and prices were reasonable, but table servers were only competent, not friendly or overly efficient.

The beers I tried tended toward the Belgian selections (there were many beers representing lots of styles, and I appreciated that) and I was a bit disappointed with them. Most were variations on Saisons, and I found them thinnish and generally uninteresting. The exception was the Frequency Illusion: Merlot, which showcased both Merlot wine and a nice Saison character at the same time.

Worth visiting? Yes, but try to find a less crowded time of day and don't expect too much from the Saisons.

Larger room, with large window and an open kitchen behind the bar....pleasant, light and thoroughly worthy spot to visit.

All sorts of tacos, salads, burgers and fresh and tasty food options.

About a dozen high quality brews on tap, with growler fills, bottles and every wed can releases in play....very worthy spot for beers and food

__Brew Cafe Review__Hit a really well run Milkshake release a few weeks back that ended in the back of the Fermentaria. Its a neat place but it was pretty crowded with an hour wait for a table, so we decided to head a block over to the Brew Cafe. A really cool spot, same great taps as the main building but much quieter. Limited food at he Brew Cafe and odd that you can get small pours but only one at time. Great vibe, beer, loved the tired hands bike rack out front.

Was really excited to visit based on all my PHL friends raving about the beers. Didn’t find the staff overly friendly. Bartender provided decent service, but no personal touch whatsoever.

I enjoyed the beers I tried, Hops Hands, Pineal, and Neck Bus. They are clearly in the hazy camp of beers, while I prefer the clearer, more biting, West coast style. They had a great selection of 10-12 beers on tap and many more in 750’s.

Glad I stopped, but probably won’t again. Just not my style.

If it's your first time here, good luck finding the main entrance! Aside from some modern yet rustic branding, the signage is almost non-existent and the first unlocked door we went into essentially had us walking into the production facility. It was clean and open enough to look like a streamlined bar space at first. It was kind of cool, though, as we accidentally gave ourselves a mini self-guided tour through some tanks and live fermenters before we realized we were on the wrong side of the fence. Back out around the parking lot to the other side.

Getting back on track, the bar and restaurant space is wide open, at first, but gets packed early. We showed up just after open and there was barely any room available, and it wasn't even a release day. After we got our two seats at the bar, a line to order formed and never died down. The bar is pretty long, and while it's concrete and brick-centric, there's a lot of natural light via an abundance of glass throughout the building. They even pulled down a projector at the center of the bar when they realized the Flyers were playing.

The beer selection is varied, but at the same time not huge. They offer some of their wonderful bottles in house, while a few of their IPAs, Saisons and dark beers will be on draft. Most of it is top notch, while some is experimental and unique, but not always delicious.

The food is inventive and very well executed--tasty while filling. Service does a fine job even while being bombarded, and is very knowledgeable.

Always a nice, long draft list that's refreshed often. Tired Hands has such unique brews, and there's always something new and out-there to try. The Fermentaria is a lot bigger than their other taproom, and the space is great, really feels like you're in the mix of the brew/bottling process. Food is decent, really can't go wrong with tacos.

I went here for the first time and was pretty disappointed. I was hoping to get a couple IPAs since they're my favorite thing they do and a lot of the saisons etc. I could grab in bottles. They only had Alien Church, another was on the menu but had kicked and they said they wouldn't be replacing it.

We had heard great things about the food, and it was better than typical bar food or having to deal with a food truck. That said, it was not very good - the nachos were chips with queso. Tacos were fine I guess.

They had a lot of beers on tap, but the variety was lacking. Not a single dark beer, no stout, porter, bock. The pils my wife opted for was fine but not something worth seeking out.

Service was also disappointing. Incredibly slow, not overly busy either. Seeing this, I ordered my second beer while only 1/2 way through my first. 10-15 minutes later I asked the server and there was an "oh, yeah, that beer kicked response. I can take it off your bill." The bill came and the beer I didn't get was still on there, eventually removed, but still.

Very much a feel of "too cool for school" here. I could see coming back if they had something I was dying to try on tap or cans I wanted. For a low key Sunday evening visit, it was not worth the cost of the Uber rides from the city.

Tired Hands Fermentaria in Ardmore, PA
Brewery rating: 0 out of 5 with 0 ratings