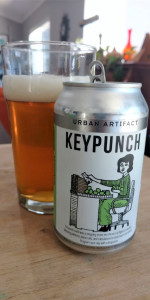 Update: had another serving of this and while I can still think of a few other great examples this one is still for sure pretty good

Reviewed by ScaryEd from New Hampshire

Pours a cloudy golden straw color with a 2 finger sudsy white head. Almost no retention and barely any lacing, as is normal for the style.

Some dude spilled a bunch of sea salt onto a key lime pie, leading to the resulting aroma of this beer. Simple, but pleasant.

The flavor is much like the aroma, but the coriander just blasts through like the Kool-aid Man. Very well-balanced.

The feel is about right for the style. Medium-light bodied with a bit of lively carbonation. Has a nice bite to it with a subtle, lingering tartness.

Overall, this is a very good gose. The key lime plays nicely with the coriander and sea salt and makes a tasty, extremely drinkable beer.

Reviewed by CaptainHate from Ohio

Reviewed by HopHunterCL from Ohio

S: I can smell the sea salt and coriander out of the can even. The lime isn't very expressive in the aroma.

T: Sour to sweet like a warhead. The lime again isn't pronounced but it works well in tandem with the sea salt. There doesn't appear to be any coconut involved. Moderate and approachable.

F: Excites the palate and is sweet on the finish.

O: Worth keeping on the shelves.

Reviewed by yuenglingfan101 from Ohio

3.81/5  rDev -5.9%
look: 3.75 | smell: 4 | taste: 3.75 | feel: 3.75 | overall: 3.75
Poured into a pint glass. A slightly hazy yellow-amber color with a modest white head that settled rather quickly. The aroma was Fresh squeezed limes with faint wheat. Quite tart on the palate. The flavor was predominantly lemon and lime, with a faint saltiness and faint wheat. Medium bodied with a fairly clean finish. Overall, an enjoyable beer that was true to style. There was nothing that was outstanding in my mind, but it was well-made in all aspects.
Jul 13, 2019

Reviewed by ChrisMon02 from Ohio

Sep 13, 2018
Rated: 4 by WillieThreebiers from Connecticut

This beer pours a hazy amber with golden highlights. It is topped with less than an inch of head that disappears quickly.

The smell is tart key limes.

This is a refreshing beer to cool off a hot temper. I was livid when I started this beer. Now I am calming down and plotting revenge. It is great for key lime lovers.

Smell: Hints of key lime and graham cracker but an aggressive salinity overwhelms

Taste: As in the aroma, the key lime and graham cracker make an appearance, up front, but the salinity overwhelms through the middle and the finish

Mouthfeel: Light to medium body with moderate to high carbonation

Overall: I feel like a took a swallow of salt water along with my beer

Thanks, Stefko, for the opportunity

Reviewed by Weisenbeer from Ohio

Rated by Jangoon24 from Illinois

Striking an eerily similar character to key lime pie, Keypunch pours a hazy straw character, never letting the eye in on the citrusy, savory and lush flavors within. Its wisping white froth carries like sea foam. But it tangy aroma of lime, graham cracker and whipped cream take the senses by storm. Pastry sweet early, the natural malts share a taste of pulled candy, sourdough and lifesaver.

As the beer splashes the middle palate, the more savory taste of graham cracker comes with hints of vanilla, coconut and honey. Key limes though stem from the natural sourness of white grape, gooseberry, lemon and crabapple and chase the thirst into a sour but savory finish with burlap and cream.

Light bodied despite its savory graham cracker character, the beer is highly crushable as its carbonated value pops for ultimate refreshment, crispness and cleanliness. A brief aftertaste of vanilla and sourdough return with a quick exit from the palate like sherbet and whipped cream.