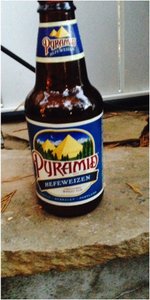 I have had this beer many times, but not for many years. It has probably been more than a decade. But, it was one of my entry points into craft beer. At least, back when Pyramid was actually a Washington brewery...

First half of the pour was pretty clear, so I roused the second half pretty aggressively, which resulted in a very hazy light amber-yellow pour with a medium sized head and quite a bit of fine, active carbonation. The smell is mild but distinctly doughy, maybe a little bit of vague fruity character.

Taste is kind of an bitter, dull grainy character, maybe with a hint of banana or something else vaguely fruity.

Mouthfeel is very dry, almost chalky. Overall...I didn't remember it being very good, but it's not as good as I remember.

3.59/5  rDev +14.7%
look: 3.75 | smell: 3.5 | taste: 3.5 | feel: 3.75 | overall: 3.75
Look: Murky rich orange with a vigorously-forming head that balloons to a pillow and slowly settles, leaving great lacing behind
Aroma: Fresh baked wheat bread, hints of cloves, and some light banana
Taste: Wheat bread kicks it off as clove slowly trickles into the mix as well. The clove fades and banana notes enter and hold center stage for a moment before wheat bread regains momentum and carries through to the finish
Mouthfeel: Full, very soft throughout, medium-high carbonation, and a soft, smooth finish
Overall: I dig it. I love a good Weissbier and though this one is fairly ‘smoothed out’ as far as they go, especially compared to a German-brewed version, it’s still good and tasty. Clove and banana are present but light and not with a ton of depth, but the wheat aroma/flavor is solid as is the mouthfeel. Good enough for me on a nice evening and for only $3.20 for a 22oz. pounder

Reviewed by mjstanton from Ohio

Reviewed by Nvrmind16 from California

Reviewed by iguanodon from Utah

Reviewed by edc20 from Oregon

Hazy golden orange color with a finger of white foam that dissipates to nothing, there is no lacing or anything left except the visible fizzy carbonation.

Floral and sweet malt in a nose, also mild banana and subtle clove along with some spice from yeast. There is some suggestion of wheat and grain too.

The taste is very sweet from wheat and bread malt also floral like in the aroma. Some yeast with its clove spice and mild fruitiness. No hop. No bitterness.

Medium body with fizzy and lively mouthfeel from its high carbonation, the feeling is crisp and quite refreshing with a dry finish.

Not a familiar face for Hefeweizen. Just okay for some refreshing.

Taste is mild, imparts wheat, mild clove, stays away from the heavy banana and band aid notes. Not dry or phenolic. somewhere between an American wheat and a hefeweizen, this beer lies in that middle ground. Easy to drink, a throwback to the late 80s and 90s.

Reviewed by poisoneddwarf from Idaho