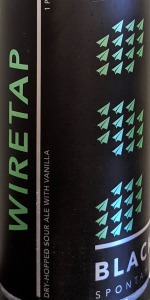 Notes: Wiretap begins as our solera sour golden ale base, after fermentation is complete we moderately dry hopped the beer with Chelan, Ekuanot, and Strisselspalt hops, giving the beer a floral hop aroma and a bitter aftertaste that blends well with the lactic acid that dries out the tongue. To push this beer further in the name of experimentation we added whole vanilla beans from Madagascar and Papua New Guinea. The beans were scraped, chopped, and pureed before being added to the base beer, adding vanilla notes into the nose, as well as a silky smooth body to this already complex beer.
View: Beers | Place Reviews
Reviews: 3 | Ratings: 9 | Log in to view all ratings and sort

This beer pours a cloudy yellow with a moderate head. The aroma is rather beautifully complex, with salted lemon, passion fruit, melon, lemongrass, green tea, burnt rubber, wet earth, spaghetti squash, and sunflower seed. I know weird notes, but there is a lot going on. The flavor immediately bombards you with vanilla and lemon in equal proportions. This is followed by salted melon and squash notes, juicy fruit gum, apricot, passion fruit, and a creamy vanilla, pulsing throughout an returning in force on the aftertaste. The mouthfeel is pillowy at first with aggressive carbonation. Overall this is an outstanding beer - complex, unusual, brimming with surprises throughout, it is a wild and delicious ride.

A: The beer is hazy and a bit pale yellow in color. It poured with a quarter finger high white head that left a thin layer of bubbles covering the surface and a narrow collar around the edge of the glass. The head eventually completely faded away.
S: Moderate aromas of sourness are present in the nose along with underlying hints of vanilla.
T: This beer starts off tasting another one of the brewery's sour ales but just when you think you would get underlying notes of some type of fruit you instead get notes of vanilla. The hops contribute a light amount of bitterness.
M: It feels light- to medium-bodied and tart on the palate with a moderate amount of carbonation.
O: The use of vanilla in a sour is rather unique, but it doesn't really offer a bit of contrasting sweetness that you would get from fruit.

this is one of the worst black project beers yet, after a recent run of exceptional stuff, this one surprised me and let me down. a golden sour base, the same one they seem to be starting to use for just about everything in the tap room, in this instance blasted with vanilla and hops, and i do mean blasted. its way too much, these flavors might go together well in smaller doses, im not even convinced of that, but in this high of a dose, its undrinkable beyond a couple of sips. tons of vanilla, which clashes a little with the sourness, they need to scale that back for sure, but its the hops that are off the most. smells alright, but is straight green and vegetal and hop burn, sloppy even, unpalatable and harsh. when i swallow it, its like a handful of hop pellets on my tongue, not flavor, not boldness, just absurdly overdosed hops, like a mistake, not a bad recipe, its that out of whack. the vanilla sweetness and high acidity make it almost sickening, the hops stay with me forever, bitter burps turn my stomach. i like the flavor of the vanilla, and obviously the base sour is solid, but this is way off. maybe some of that hop burn will drop out over time, but this one probably shouldnt have gone on tap. did anyone who works there taste it? yuck.