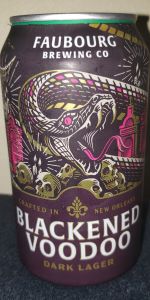 Notes: First released more than 30 years ago, Faubourg's award-winning Blackened Voodoo is a delicious dark lager crafted in the traditions of the great German dunkels that inspired it. Our brewers skillfully balance five premium roasted barley malts with two hop varieties to create a dark, mysterious brew known for its bewitching character and magical spirit.\

Beer was a little plain and a bit watery tasting. Might as well have bought a miller lite. Expected more.

From a 12 oz can into a pint glass, it’s a dark brown, almost pitch brown with a thick, creamy brownish tan head. The head fades at a rapid clip but leave a nice thin cap and collar of clumpy lace all the way to the bottom of the glass. Nose of toasted malt and dark chocolate. In the mouth it tastes of toasted malt, brown sugar, dark chocolate. Good stout-like flavor profile (Munich Dunkel). Mouthfeel is creamy and rich with low carbonation bite; very smooth. Overall, quite good, almost like a dark chocolate malted milkshake beer. Would definitely try again.

September 2015; now brewed by Faubourgh Brewing. Dixie Brewing established in 1907 and due to social changes the work DIXIE is no longer acceptable. Brewery was destroyed by hurricane and rebuilt under Faubourgh (“Fo-burg”) name. 7/28/21 - had this at Faubourgh- this is the only carryover beer from Dixie Brewing.

Clear dark copper appearance displays a good size beige head and plenty of lacing. Sweet, malty aroma with a hint of molasses and a light touch of soy. Mild, sweet, malty flavor, passively hopped, with a dry aftertaste. Medium bodied leading to a short lived finish. Goes down easy, in a Big Easy sort of way, but now I want some gumbo.

My good friend and old neighbor from the 'Wego gave me a bottle of this beer. It poured a clear dark mahogany amber with off white head thatbis not leaving much lace. The scent was subtle....waif of malt. The taste was nicely balanced and easy to drink with caramel malt base and even finish. The mouthfeel was medium in body with good carbonation. Overall it is a good beer.

Pours a deep dark brown woth mahogany highlights, topped with three fingers (narrow glass) of dense dark khaki head with amazing retention. Hangs around for minutes before settling to a sustained finger. When held to the light, it is revealed that the beer is quite translucent, and the brown turns mahogany with mahogany turning reddish-maroon. Ample visible effervescence.

Very pilsner-like. Grainy, slightly bready pilsner malt with only a touch of roast. Nutty. Some caramel, toasted bread, a dusting of cocoa, and then back to the grainy pils base. Some bright fruitiness lending notes of green apple and pear.

Palate: The beer greets the palate with pilsner malt, caramel, nutty malted barley, dusty grain, a hint of toast, and then turns back towards a very strong indication of caramel and milk chocolate. Some brighter yeast notes poke through, but it isn't the fruity bouquet from the aroma. The finish brings malted milk balls, caramel, chocolate chips, and then just a whisper of some bittering hops in the background, lending a resinous hint.

Mouthfeel/Body: The beer is medium-light in body. It's light and crisp like a pils, but that roasted malt does lend some heft to it. It has a smooth roundness to it - in part from that nutty malt, but also from the slightly subdued effervescence. Some mid-palate sweetness, but dries out very nicely in the finish with some roast - not quite char.

Overall: Not a bad Euro dark lager. Much more character than some others I've had, and finds a nice balance between coming across as a dark beer, but letting that crisp pilsner malt underneath shine. It's a simple beer, but it's good as a simple beer. It doesn't leave me wishing there was more to it, and for that, I will call this a good example of the style. Worth trying.

I recently had this beer in the French Quarter in a very relaxed dinner setting.

Taste: Toasted bread, caramel, a little bit like Coca Cola. Decent but not a whole lot of flavor.

Body/Overall: light body, fizzy, refreshing but a bit soda like

Poured from a bottle, but not hard enough so I had to stir it up to reduce the carbonation feel. Amber color, pretty easy to see through. Smells a bit of fruity/wheat, not strong at all. Taste is similar, with wheat at the beginning, mild fruitiness in the middle, ending with a bit of caramel. Pretty thin/light bodied, moderately high carbonation. Not bad for a lager, but definitely prefer stouts.

It's a drinkable dark lager but there isn't much complexity or depth of flavour here. It probably bests Shiner's and Sam Adams' stabs at the style, but having tried a single I wouldn't nab a sixer...there are far better European-brewed dark lagers out there, not to mention better American craft expressions of the style with availability wider than Voodoo Lager's. I won't comment on the vague racism of the marketing and New Orleans association, but suffice it to say this is a marketing-over-quality effort.

***
03/05/20 impression from a can brewed from the recently reopened New Orleans production facility:

This beer has a wonderfully complex flavor. The mouthfeel is thin. It has variable carbonation averaging on the high side, and it is slightly soured.

I really appreciate this beer by Dixie BC out of New Orleans. A dark amber beer. Dad loves it!

From notes 7/10/12: Pours a bronze, dark amber producing 1.5 fingers of frothy, moderately lasting tan head that leaves webby sheets of lace. Aroma is malt heavy: toasted bread, toffee, molasses and fruity with a hint of dried apple. Taste is malty but bitter from start to finish, fruity with a semisweet, caramel cola like middle. Earthy and floral hops it is unusually bitter for such a malt forward brew. Mouthfeel is medium bodied but on the thin side, moderate carbonation, fairly smooth with a hint of astringency in the aftertaste.

I am utterly impressed with artwork on this label. I am a big fan of horror movies & the halloween holiday that's why this type of artwork draws my attention. If you can't manage to visit the bayou then you can at least drink some beer that was brewed near the bayou. I am getting some caramel as well as some light dark fruit notes. It's a tad bit on the watery side & a little too light bodies for the style but maybe it was brewed that way on purpose. Dixie is one of my favorite Louisiana breweries next to Abita. Cheers! B

It poured dark brown cola color with a thin beige color head that hangs around. The smell is of Carmel,taste is the same. It has a medium feel with noticeable carbonation in it. Overall a above average drink, but one I would enjoy again.

Poured from a (fairly old) 12oz bottle into a Willi Becher glass.
4/3.5/2.75/2/3.25
Little to no head. Translucent nut-brown, ruddy beer. Notably effervescent.
Smells heavily of vanilla or oak, but not much else.
Super sweet, almost sickly so, but otherwise rather pleasant. Basically vanilla ice cream with a touch of beery fizz on the endtaste.
This may not be for everyone, but it has its charm. Recommended if you like eisbock, but don't wanna get smashed.

My first beer in the city of New Orleans.
Nice amber appearance like a good lager should look.
Smell of caramel and sweetness.
Taste was refreshing and quite smooth.
Feel was nice.
Overall not a bad starter to my week in the city.