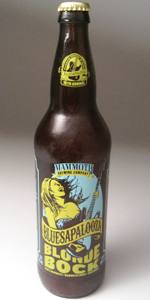 A: Pours a hazy dark orange with a white head, not much head retention, decent amount of carbonation, looks a little thin for 8%.

A: Vanilla bomb, lots of vanilla, bourbon, toffee, very sweet, not getting much else, some alcohol on the nose, pretty bright aromas, bourbon really shines through.

T: Like the nose, a hit of vanilla, toffee, and bourbon, slight bitterness in the middle, slight finish with caramel malts coming through, lots of vanilla and bourbon, overwhelms the other characteristics.

O: I thought the bourbon and vanilla came through really good, however, I would have like the bock's characteristics to come through, but they were overwhelmed by the bourbon, enjoyable but could have been better with some depth and complexity, with some age it might change.

2015 version. 7.5.% abv., aged in Heaven Hills bourbon barrels. Pours a clean yellow-orange. Intense bourbon aroma with a sweetness. Taste is much the same, and really overpowered by the bourbon (just as i remember from previous versions). Unable to really taste the base beer, but great if your looking to taste "some" boubon. Fun to revisit, not a daily drinker. Cheers!

Had this beer as part of a flight of samplers on tap at Boneyard Bistro. I repeated this one. Kinda of a murky golden color. Too many smells in this BBQ joint to figure that out. I agree with some of the reviewers below. Smooth and whiskey barrel forward without being too sweet. Not complex. A clean, simple beer. Nice, long, and pleasant aftertaste that didn't deteriorate. A sip will make you smile. It was the favorite beer of the evening (7 beers tried). It is also available currently at Whole Foods in Sherman Oaks. It played very nicely with the BBQ feast we had going for a birthday celebration. Served with BBQ is a good food pairing.

This beer surprised me. I went in and asked for a barrel aged and they said this was the only one they had in bottles. I brought it home and drank it that night. Kinda has a smooth almost buttery taste to me. I would put this in the top 5 beers I have had in 2015

This is a vast, sweet, boozy brew that is like some friendly giant. Handsome orangey golden color in the Ommegang chalice with plenty of foam. The mouthfeel is a little on the unctuous side with adequate spritziness. Watery booze smell with some gardenias and vanilla.

Hot with alcohol but the bourbon flavor is delicious. Warm and toasty with a serious sweet malty undertone. The hops, in keeping with the sort-of Bock style, are fairly shy, but there is a twang of bitterness in the finish. I suppose it's a surprise that the often-sugary golden Bock style works as well as it does for this whiskeyfied cookie dough.

Crazy stuff that is quite sippable and has a pleasing woody barrel taste. From the 22 oz bottle purchased at Best Damn Beer Shop in downtown San Diego.

22 oz bomber into a tulip glass. Huge thanks to ILOVESTOUTS.

S - If I didn't know any better I'd say this was a tamer Backwoods Bastard. Nose starts off initially with rich toffee malts followed by a wave of smooth bourbon notes. Butterscotch, vanilla, oak, and warming alcohol. Finishes sweet and fruity with a touch of spice, almost like apples or calvados. Really great aroma.

T - Smooth toffee malt leads right into the bourbon notes. Very strong on the butterscotch and vanilla with some light spice and fruit. The alcohol tends to overwhelm things and muddle the aftertaste.

O - Not very "bock like" to be honest. It is pretty damn tasty with a wonderfully smooth and balanced bourbon presence. Very close to scotch ale territory in terms of flavors and aromas though. I quite enjoyed this one.

Thanks to jmgrub for sharing this one at drewone's tasting.

This beer is now know as Blondibock per the bottle.

Pours a hazy honey orange with a foamy bone colored head that settles to wisps of film on top of the beer. Small dots of lace form around the glass on the drink down. Smell is of malt, wood, and bourbon. Taste is much the same with an alcohol kick and a woody finish. This beer has a good level of carbonation with a crisp mouthfeel. Overall, this is a good beer that has a better bourbon presence in the taste over the smell.

Puled out of the cellar tonight thinking blonde German boch! Perfect for the temp! Missed the bourbon barrel aged! But damn is this a tasty brew! Wish I would have thought to side by side with town hall buffalo boch.

Poured into Firestone tulip. Minimal head and but cascading lacing. Smell of bourbon vanilla and candy caramel. Taste is so light And hits the bourbon notes and ends with Bready yeast and more caramel and vanilla. Damn in grabbed a good one!

Finish is long on this one and the overall is just wow. Pullednthisnthinking something else, but damn, what a brew! Nicely done Mammoth!

Overall, a very interesting and unique brew that was a pleasure to sample. This brew was bourbon barrel aged, but still maintained all the base components of this great German style.

22 oz. bottle, a gift from my good friend, Bryce, who trekked the John Muir Trail during July-August 2011. The bottle has been lurking in the depths of the fridge the last 6+ months, awaiting this, the prettiest and warmest (upper 50s) day of 2012. Our reward after 5+ hours of spring cleaning, split to two pint glasses with my wife.

'[B]rewed as a German-style Blonde Bock in March 2011, and after two weeks was then racked into Heaven Hill bourbon barrels. There, this beer matured for five months, picking up much of its color and flavor from the oak barrels.'

A: Cloudy/silty, like an unfiltered cider; butterscotch-colored. A skim-thin head of white cream, a few speckles form a subpar lace. Tough to see any carbonation, it's just that fuzzy.

S: Sweet noseful, lots of vanilla and sugary/spicy bourbon - which both work as a less-than-subtle invitation to take a sip. Decent strength, a little 'one-dimensional'.

T: A lightly-nutty and notably fruity bock with a pretty wonderful spiced-bourbon quality permeating to the core. Although it was a good late afternoon sipper, this would have shone as a stand-alone dessert: the flavor I kept getting was 'macaroon', a sweet and toasty coconut with pinches of spice and a cocoa dusting. Oh, and borbon - those Heaven Hill barrels have done wonders.

M: Medium mouthfeel, some mild booziness that isn't over the top. Smooth carbonation, with a thin coating of grainy sediment left behind.

O: An enjoyable beer and such an interesting twist to have a bock that's been barrel-aged. I thought it was good; my wife repeatedly proclaimed it "deee-licious" for that's an endorsement if ever there was one. I suppose it would have been interesting to have tried this in its 'fresh' state when first bottled (mid-summer 2011) but it was pretty damn good in early March 2012.

Well done, Mammoth BC (my first beer from them) and thanks to our friend, Bryce, for thinking of us and bringing one home.

So odd to find a Bourbon Barrel aged "lighter" beer. The Barrel is at first and foremost which I like VERY much...even after 7-8 months from bottling.

Big Bourbon, Coconut and Vanilla Oak Barrel at the front. Blond Bock nowhere to be found...well maybe a wee bit in the finish if you look for it.

Sticky and big from the barrel but the lighter mouthfeel factor throws me for a loop with the big, bold, barrel notes in your face...is this a session Bourbon Barrel beer? I'd bet my next month's rent this beer's ABV is higher than stated on the bottle.

From what I heard, or "WORD on the street" is that Heaven Hill Barrels, the same Barrels that 50-50 Eclipse used for their Heaven Hill variety were the ones used for this beer. I mean...how can you go wrong??

Awesome beer. A winner for my palate!

Overall: Best blond bock ever. The bourbon is prevalent but not overpowering. Good complexity. Good drinkability. I wish I had some more. Thanks Phil.

Thanks Phil! Pours a blonde, bright golden color with a medium white head that disappears quickly. Scent is heavy with bourbon, vanilla, and toffee. Hints of oak and zesty spices. Taste is outstanding! I was not expecting such a great beer from Mammoth brewing. I'm not saying they're not a good brewery, I just didn't know they knew how to barrel age beers well. The taste is lovely complex bourbon with vanilla and oak. Slight hop profile with caramel malt and lovely toffee flavors. The bourbon is very well balance in this beer. Mouthfeel is medium bodied and slightly velvety and creamy. Drinkability is very high. Overall, this beer really impressed me. I wish I had more of it.

App- Golden orange/yellow with a 1-1/2 finger head. Head falls quickly to a ring of 1/8th in. Left a good amount lace and cling.

Smell- A very unique blend of bourbon, coconut, vanilla, bock and spicy yeast. I know this seems odd and it is but it works.

Drink- I found this at a gas station, drank at a hotel in NV into a small water glass but still tasted damn good. Need to grab another bottle to age for a year.

A: A deep amber medium brown color with an orange tint which has a medium opacity. A nice looking very light tan head tops it off which has a nice retention, and quite good lacing.

T: Delightfully light bodied and understated for how boozy the nose is. Crisp and clean flavors from the Bock style show up in a marvelous sort of way combined with the rich vanilla bourbon notes from the barrel aging. A little confusing to the palate at first but it works well. Its an interesting take on a technique and flavor (the bourbon) which is almost always coming out of a very rich product (triple, stout, strong dark ect...).


Blondibock from Mammoth Brewing Company
Beer rating: 85 out of 100 with 51 ratings