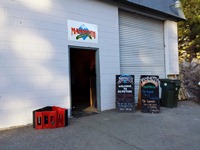 High up in the Eastern Sierra Mountains, at an elevation of some 8000ft lies the home of the Mammoth Brewing Company. It is a little confusing to the first time visitor, like myself, as the address for Mammoth Brewing is clearly listed as 18 Main Street which confuses Mapquest, all the more understandable as the building is on the corner of Lake Mary Road and CA-203 Minaret Road. Even more confusing is the fact that the building actually houses the Mammoth Brewing Company (which is the Brewery part) whilst the Bar section is actually called Whisky Creek Restaurant and sort of separate, but not, if you know what I mean. Final part of the jigsaw is such that the address on my credit card receipt clearly lists the address as Whisky Creek Restaurant 24 Lake Mary Road. Hmmm, go figure.

It is easy enough to find nonetheless, driving up CA-395, take the exit for CA-203 toward Mammoth Lakes. CA-203 starts as Minaret Road and then eventually turns into Main Street until it reaches a crossroads where the cross street to the left and right is, rather confusingly, recalled Minaret Road. Head straight across onto Lake Mary Road and take the entrance on the right into the Parking Lot, this is where Mammoth Brewing Company and Whisky Creek Restaurant are.

A large two storey wooden building has more than a hint of alpine feel to it with some wooden decking and a sloped roof to cleverly ease the pressure of falling snow in colder climes. The ground floor entrance has a welcoming counter complete with a cash register. To the left of this counter in wooden cupboards with glass doors, Mammoth Brewing Breweriana including T-Shirts etc. is on sale here. In fact, you can see the Brewery equipment through large clear glass windows which line the top and side of the stair case. The ground floor houses the seated Restaurant area (though I didnt eat here so never visited it) whilst a wide wooden staircase leads you up to the first floor and the more laid back Bar area. This is where I spent my time whilst here. A large wide open room sits beneath the beamed eaves of the sloping roof. The bar area is a small U-shaped affair that is to your immediate left set against the back wall as you enter. I visited on the eve of the 2006 Mammoth Festival of Beers and Bluesapalooza, so live music was in full swing on a small stage to the right and a cover charge of $3 too. The music was great, although they had to move Pool Tables in front of the small stage to allow more space for others, yet they only did this *after* the Band started playing and ended up kicking people off the Tables mid-game.rather poor organization there I thought.

They had a handful of regular beers on sale including the Double Nut Brown, IPA, Amber, Gold and Pale I think. They had three specials advertised but two of them were not available, rather a poor state of affairs on the eve of the Mammoth Beer Festival I thought when they would have known that plenty of beer geeks are in town. Service was OK, but rushed at time and Pints could often fall short when busy. I didnt try any food here, but upstairs it seemed that just Pub snacks were being served, if you wanted food I guess you had to head downstairs. Stuck to the IPA for most of the time, an amber body with a decent enough citrus finish but nothing earth-shattering.

A nice enough place, and it is always great to visit the source of beers that I have previously tried in bottles, but the Whisky Creek cum Mammoth Brewery Tap seems like trendy-City at times - a good place to pose if you will. The beers were OK, but the whole feel is that of a Night Club late at night rather than a Bar. The lack of Specials was also a disappointment, it summed up the feeling to me that whilst this is attached to a Brewery, its not really a bar focused on their beer as such, moreover it just happens to sell the adjacent Breweries offerings.

Worth a visit, and boy, what a setting!! but my advise would be to try the Clocktower Cellar Pub just over the road if you want a wider beer range and a more laid back atmosphere in which to enjoy it.

My ratings do not reflect how much I liked this place. They do demonstrate how ratings do not translate to a recommendation. Hopefully, though, it will be obvious that I like this place and would return on the outside chance that I am ever in Mammoth Lakes, California again in the future.

They specialize in sours, and I tried four of them over the course of the week in Mammoth. Their AIPA is just OK. I never got to the others, even though I know we had a Porter at one time.

The vibe is whatever you make it since they do not wait tables. You can't call it service at all. The food is separate (you walk up and order) and it is tasty just like the brew side of things.

I do not like the format of the bar and restaurant or the lack of service but still recommend it for good food and drink. Heck, I bought a Highest brewery t-shirt. It wouldn't be so difficult to wait tables for customers who prefer service.

I was on vacation...a great find in Mammoth Lakes, CA. The food was good too...

Well priced aged beer. You tried the rest this is the best. So flavorful you just might slap your girlfriend! Ages so well but taste so good it's hard to do so. Find it drink it, try to save one if you can! This beer will not disappoint you.

First time to the new location, and quite the difference! My favorite thing about the old place was the bathroom sink handles having Vise Grips for leverage. Nothing like that here! Beautiful inside and out, great large biergarten outside with an awesome tap truck. Great food, great beer, and everyone looked happy. Love Mammoth. Cheers!

Located right off the main drag, the brewery has a beautiful tasting room and eating area with large windows over looking the surrounding mountains. Inside there's an array of flagship beers, as well as 4-5 special offerings. The beers are solid and clean. The food is quite tasty (cant go wrong with local beef) and service is usually pretty quick.

Great place to hang out after hiking the PCT. The server was very helpful and knowledgeable of the production of the beers served and their were 12 different offerings on tap. I certainly hope I get another chance to visit.

Very nice location in the heart of Mammoth with a killer view. Never been in there during peak hours, but always a few people around. Friendly knowledgeable staff and solid beer on tap. Limited releases are always good.

I have been to both the old and new facility, new facility wins hands down. Mammoth is a four seasons town so come winter this would be an inside deal 100%, but I went late summer/early fall, so sitting outside was still enjoyable. On a busy intersection, although a little removed from the actual corner, so the limited traffic was not disruptive. No food options here. Clean/functional bathrooms. Friendly/courteous staff, at least when we went. A nice selection of brews on tap, but no guest list (no problem since I wasn't there for the guest list). Parking options ample. Nice view into the sierras, and that fresh mountain breeze. Multiple levels could pose a problem for the physically disabled. An overall good, and relaxing experience. Somewhere between 3.5-3.75. Hope this helps. Cheers.