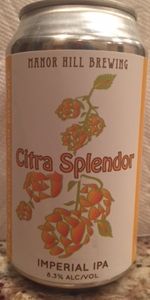 Notes: Welcome to the world of bright, citrus and tropical fruit forward IPA’s. This divinely hoppy brew will clock in at 83 IBUs and will pour a hazy golden color with a big white head. Aromas of lemon peel, tangerine, and passion fruit come through on the nose with some dank undertones. The flavor profile begins with an intense hop bitterness that is complimented by slightly sweet, caramel malt in the finish.
View: More Beers | Place Reviews
Recent ratings and reviews. | Log in to view more ratings + sorting options.
4.18 by Hockey_Fan from Maryland on May 12, 2022
4 by dafla67 from Pennsylvania on Apr 02, 2022
4 by petewheeler from Maryland on Mar 25, 2022

Lightly hazed gold hue with a small white head and a fair amount of lacing. Citrusy aroma, befitting the name, with a bit of an herbal edge. Taste adds more of a blend of tropical fruits with the citrus. Sweetness showing up more now. Things stay fairly mild on the palate until some bitterness settles in in the aftertaste. Not noticing the abv.

Nose is simple citrus and maybe some underlying tropical notes. A nice mix of lemon and grapefruit and sweet orange flavors and a relatively thick texture and clean finish. Low carbonation but it mostly works. A little different from the pack on that front. Pretty drinkable for the octane. This one grew on me.

Excellent DIPA! Lots of flavor for anyone who enjoys hoppy beers

Look: It pours dark yellow with a slight bit of haze. It has a white head with low head retention.

Aroma: It has grapefruit aromas with some dankness. There are some tangerine and tropical fruits that are in the background.

Taste: It has citrus with peel, tangerine and passion fruit. There are some dank background notes as well.

Feel: It has a medium body with a sharp, bitter dank aftertaste.

Overall, the aromas are good, but the bitterness and dank qualities in the flavor and aftertaste just don't work for me.

Poured from a can into a pint glass. Pours cloudy orange with a small white head. Smells of citrus and some notes of piney hops. Tastes of citrus hops with slight earthy notes. Beer is light bodied and easy drinking, good carbonation. Overall, a very good beer.

Lemon peel, orange zest and pineapple on the nose.

Some alcohol sweetness but no booziness. Lemon zest and fresh pineapple juice on the frontend. Something a bit bromelain sting, although really light.

A better version of Lienenlugel's Summer Shandy if you prefer it.

Watery. Something like Pine-oil lingers a little, but it's pretty thin and watery to me.

$13.99/6pk. Not bad to try once, and is a good interpretation of a American Style IPA, although for the price I feel like other better ones are available, or I'd pick up a pack of Lienenlugel's.

Pours very pale and bright and reasonably hazy. Nose reminds me of when orange juice goes hard along with some tropical notes. Certainly quite yeasty and a bit dank. Taste is really light for an 8.3% beer and you have to let it get up to near room temperature before the alcohol comes through. Also a bit of tartness on the back end. IBU perception is considerably low as you'd expect from this style of IPA but is is still surprising to read that it is listed as 83. Overall, if you are looking for yeasty, soft, and fruity, this is solid. Just make sure it is fresh.

This is sorta like a cross between NE-style IPS’s and a traditional DIPA. It has the look, with the super hazy grapefruit color, and the nose has the Citra hop aromas, but there’s also a boozy note.

The taste is centered on the Citra hop flavors, but the aforementioned boozy note is still present, and the mouthfeel is straight forward old-school DIPA. I’m really enjoying this, whatever category you place this in.

poured from a 32oz growler into a 25(?)oz tankard (i dunno how big it is but it's pretty large)

look: amber, a bit hazy but still translucent. not much head.

taste: citrus hops. a slight pineyness and a small helping of malt. not bitter at all, despite being a double ipa. aftertaste is a bit grassy. very ester-y.

overall: a double IPA unlike any other double IPA i've tasted. it isn't super piney or bitter, but has a nice fruity flavor. reminds me almost of a new england IPA but stronger and hoppier. if you like your IPAs citrusy and delicious, this is the DIPA for you.

Can, about one month old, served in a tumbler. Pours a cloudy golden yellow body, slight orange hue, one and half finger white head, fair retention, no lacing. Smell is citrus, sweet bready malt, a bit of caramel, grapefruit and a touch of resin. Promising; however the flavour is a bit on the sweeter side, touch of honey slathered on the white bread, fair bit of caramel followed up by grapefruit and a touch of lemon. Moderate leafy resinous bitterness on the backend. Mouthfeel is medium-lighter bodied, a bit slick and slightly syrupy, fair bit of carbonation. A bit out of sorts here, although the nose was very promising.

Poured from the can into a Spiegelau IPA glass. Canned December 19th 2017 (I think?)

Well a simple and nice body color is presented, there is litteraly no head creation on this beer. I mean for an IPA it's nearly lifeless in appearance. Half finger of white head, but manages a stable crown. No lacing, no retention, I mean nothing. Barely looks like the beer has any attenuation to it. Tangerine orange body, a bit opaque but slightly muddy too.

Very nice aroma though as things finally showcase some IPA love. Sharp citrus orange to tangerine notes, with touches of earthy qualities. Flirts a little caramel thick, but the sweetness is mostly showcased in the hop angle. Quite nice.

Palate unfortunately but not surprisingly as the appearance hints falls flat. Thick bodied but also syrupy but luckily without too much sweetness. Dead lifeless mouthfeel but with a decent citrus profile in flavor. Mid palate of orange and tangerine, but far from juicy character, and sort of flour dry thickness prevails on the malt body. Touches a little spicy on the finish as well, with even some zesty citrus qualities.

It's got a really good flavor for it, but the mouthfeel is lifeless and dead. There's a good maybe even a great beer lurking in here.

One and a half fingers of cream colored foam rests upon a slightly cloudy, copper body. Some sticky lace adheres to the glass in rings.

A decent strength and somewhat pungent aroma greets my nose. Light citrus and green leafy hops are the mainstay with a bit of lemon underneath.

The taste starts moderately hoppy and mostly dry. This profile carries through to the finish with a rising bitterness. The feel is rather light and crisp with a light to medium body. The finishing bite is more from the hop bitterness than the moderate carbonation. It does have a little frothiness to it but not much.

Nothing fancy just solid and straight forward, a good DIPA that hides its alcohol well.

This is a thick, tasty IPA. Growler from Elkton. It is yummy (JK) but since ABV is 8.3 that is actually a negative for me -- will have to drink it in small amounts! Or get too drunk!