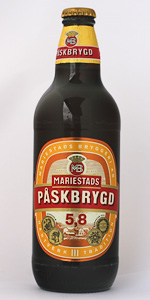 This was really a good beer with a great taste and a sharp carbonation and flavor. Noticed barley notes more in taste than smell and hop notes more in smell than taste. Maybe a bit of smoke as well, not quite sure..?

I would not drink this beer all night but certainly in quantity nevertheless. Really good quality and one must try if visiting Sweden. A step or two above a lot of other Swedish beers I tried.

The beer is clear dark amber with a ruby red tone, the head is beige, compact and leaves lots of lacing.

There is citric aromas, orange and lemon, some sweetness, caramel, some green apple and faintly spicy.

Some initial sweetness, syrup and molasses, then dark bread, bitter oranges and a god measure of bitter hops.

Rather high carbonation, a medium body, a dry finish.

A good hop dominated brew for being an "Easter Beer". Well balanced.

I got my hands on a 50 cl brown short-necked bottle, with a yellow label with writing in red. Not too inspirering.

A: The pour is deep ruby. The head is large and creamy off-white. It dissipates slowly into rich lacings.

D: Obviously not a craft-beer, but not bad.

Appearance: Mariestads Påskbryggd pours a intense ruby colour along with a majestic light brown crown which boasts of a height of approximately 2 ½ inches or more (even though I tipped the glass pretty late) which chose to stay on my beer for quite some time, when that was dull and it eventually left i disintegrated into a cobweb leaving sporadic spots of lacing alongside the glass.

Smell: Some buttery notes stick out, a mild roasted character timidly calls for attention along with a caramelly hop backdrop.

Taste: A - dare I say "Mariestad trademarked" - bitterness which does lingers on in the palate for a some time, it's not blatantly obvious but its presence is at the same time undeniable, is what occupies most of the taste. It bears a burnt yet dry character and flows graciously along with a bland acidic feel.

Mouthfeel: Creamy as something that rhymes with stuck and duck but disappointingly low in its body (that is to say medium-to-low) and rather mild in carbonation.

Drinkability: All-in-all this was a pleasant beer, however it felt a bit "artificial" at times and that brings the total score down a notch or two, still a good beer though!

The colour is deep ruby red with a tint of brown. The large beige foam sinks down to a finger thick uneven head, leaving massive lacing.

The smell is a balanced blend of dry roasted malt and bitter hops. Not bad, but not very special either.

The taste is dry and roasted with low body. The medium long aftertaste is a little bit salt with some malty notes and some fruity bitterness.

The carbonation is average for a dark lager. Medium sized bubbles.

By far the most interesting beer of the Mariestads brand (Mariestads was a brewery, bought and closed down during the sixties), but that doesnt really say that much does it?