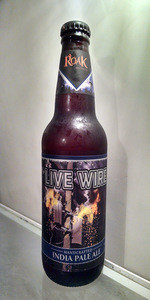 Pours a brilliant amber-gold, and produces a 1.5 inch lasting head. Nice Belgian lace. Quite pleasant hoppy nose - nothing layered or complicated. The nose lowered my expectations. On the palate it was very bitter and unbalanced. Where is the malt to balance the bitter hops? Bitter for bitter sake? This is not my preference. Nice bitter notes on the palate, but not much else. Medium-to light body. I will not return to this.

Poured from bottle to nonic pint glass. Golden in color, with two fingers of soapy white head. This one is a straight down the middle classic American IPA: pine, citrus (orange and grapefruit) with a bready/caramel malt backbone. A good pick for a flagship.

Look: It pours golden with a white head. Head retention is moderately good.

Smell: There are strong stone fruit notes with some tropical aromas mixed in.

Taste: There are stone fruit flavors with some citrus. There is a moderate bready background to it.

Feel: It has a moderate body with a slightly slick texture. It is moderately low as far as bitterness goes. The bready finish is long lasting with a slick citrus to it.

Overall, it tastes more like an English pale ale instead of American pale ale based on the strength of the malts and the lack of bitterness. With that said, it has some decent flavors.

I was very surprised on how well it tasted because I never heard of this beer before. I saw it in my local store and had to give it a try. I'm very happy I did.

Appearance- from a hardy pour into a pint glass it's a transparent straw color with a frothy head that's the slightest bit off-white. leaves decent lacing.

Aroma- orange candy. has a super fruity smell. kinda like fruity pebbles cereal but a tiny bit different. weird for an ipa but not bad.

Flavor- malt is the first noticeable. kinda like a graham cracker taste with oranges. bitterness isn't anything crazy. abv well hidden. pretty one dimensional with the hops. not getting pine, nor grapefruit, or anything else but just a candied orange taste.

Drinkability- could drink it if I wanted to. too many better options out there tho.

Overall- for an ipa it's malt driven. hops are noticeable don't get me wrong but the malt is the show. decent beer just wayyy too many better options out there. the orange flavor is making me think it's a mandarin orange ipa or something.

Look- poured into a founders pint glass. Pours a hazy amber/straw color with very little head, less than one finger

Smell- not a strong smell. I think I'm getting a little pine and maybe a little "dank' smell hard to say.

Taste- not overwhelming, a smooth citrus, some centennial hops. I don't think there is the 72 ibu's like they claim

Mouth feel- light bodied, smooth. Not sticky at all like i was expecting.

Overall- i do like this beer. I was expecting quite a bit more from it tho at 7.5% and 72 ibu's. Really tho only reason I'm giving it a straight 3 is honestly i was let down. Still a good beer

Pour: deep yellow with a strawberry hue when held to light. Little or no head from bottle pour, but did leave a nice lace on the glass.

Smell: light piney notes with a slight citrus undertone, notes of sweet malt in the rear of the nose.

Drink: strangely clean up front with a kick of grapefruit hops in the middle. The finish is a slightly oily piney hop that lingers for a short time.

Feel: very light and dangerously drinkable given the abv.

Overall: not the best and not the worst IPA out there. Quite drinkable, would buy again.

Slightly hazy golden body, no head but leaves some lacing.

Smell is a gentle tropical aroma of fruits. Very hop forward but some malts sneak in as the temp rises.

Feel is medium bodied, light stickiness and a long bitter finish. Would be nice to see some more balance but it's a very American IPA.

Overall it's enjoyable and refreshing, would have again.

Pours a nice opaque orange, with nice head, diminishes to light lacing, nice stickiness staying on the glass. Nice floral, piney aroma, taste is fruity, with a bitterness that is not offensive. Very nice IPA at $10 a sixer, will drink more of this for sure.

12 oz bottle. Pours murky golden orange with a medium creamy white head that goes to a thin film that leaves some lacing.

The aroma is crystal malt with funky fruit and grassy hops.

The flavor is sweet crystal malt with ripe fruit and grassy hops. The mouthfeel is medium to full bodied with smooth carbonation.

Bottle to a snifter. Look is a pretty clear orange. Smell is nice citrus but light. Some nice spice too. Taste is bitter and malt, more on the malt side. Not much bright hops. Finish is rather dry. Feel is ok but nothing memorable. Overall a decent effort from a newer local. Still on board with the Roak offerings.

A - Pours a cloudy golden orange with a one-finger off-white head.

T - The taste starts with tangerine, grapefruit, and sweet malts. There is a good amount of earthy piney hops midpalate. The finish has a lingering piney bitterness.

Poured from a 12 oz bottle to becker. Pours amber and clear with a high fuzzy head. Sweet hop aroma like grilled fiddleheads. Lemony hoppy flavor with a light mouthfeel. Bitter taste without a whole lot of flavor, but still balanced. Good beer.

I picked up a bottle of Roak's Live Wire IPA last week for $1.79 at The lager Mil. I didn't have the best first impression for this brewery. but I'm interested to see how this IPA turns out, so lets see how it goes. 2015 Vintage. Poured from a brown 12oz bottle into a imperial pint glass.

A- The label looks good, it goes well with the name and it's eye catching. It poured a nice golden oeange color that took on more of an orange color when held to the light with a finger and half worth of bubbly off white head that died down to a thin ring that stayed till the end and it left s little bit of spotty lacing behind. This is a good looking beer, I have no complaints.

S- The aroma starts off with the hops being the first to show up and they impart a nice fruity aroma with a some nice tropical fruit and citrus rind like aromas with no single fruit seeming to stick out the most and it's followed by some green and light piney hops showing up in the background. Up next comes just a little bit of doughy yeast followed by the malts with some nice caramel malt grainy and bready aromas showing up with just a slight toasted aroma. This beer has a good aroma, I like the hop profile and it has good balance.

T- The taste seems to be fairly similar to the aroma and it starts off with a medium amount of sweetness with the hops still being the first to show up, but this time it's the green hops that shows up the most and the fruit hops make for a weird fruity candy flavor. Up next comes a slight bit of doughy yeast followed by the malts which impart the same aspects that they did in the aroma and they show up just as much with no single aspect seeming to stick out the most. On the finish there's a ,medium amount of bitterness with a hoppy and slightly weird light medicinal taste on the finish. This is a nice tasting beer, but I wish it was more like the aroma.

M- Fairly smooth, crisp, medium bodied with a slightly higher amount of medium carbonation. The mouthfeel is pretty nice and it works well with this beer.

Overall I thought this was a nice beer and a little above average example of the style, it wasn't bad, but it didn't have anything in the taste that it made it really stick out from most other IPA's except for the light medicinal aspect. This beer had ok drinkability, one glass might be my limit, I don't have the urge to drink another one in a row. What I like the most about this beer is the aroma and appearance, they were both good and the highlights of this beer. What I like the least about this beer is the taste, it just wasn't as good as the aroma led me to believe. I don't think I would buy this beer again and I don't think it's a must try, but it might be worth taking a chance of if you really like the style and want something just a little unique. All in all i didn't love this beer, but it was still a good amount better than their session IPA, it was just a little rough around the edges. So far this is my favorite beer from this brewery and it's just a little above average for the style. This was a nice beer, but it could still use some work, better luck next time guys.

This beer pours amber in color with golden highlights. It is topped with two inches of off white head that leaves quicker than the label indicates with minimal lacing.

I get a strong aroma of citrus and rubbing alcohol. The citrus is great, but the alcohol smell is distracting.

The taste starts out great with a lot of citrus, Then the alcohol comes through the middle, and it finishes with some bitter grapefruit and pine.

This beer has the potential to be a very good IPA if it weren't for the persistent rubbing alcohol presence. I loved the other aspects of this beer.

The Live wire follow more traditional roots as english style ipas. The beer poured a hazy yellow with thin white head that is not leaving much of a lace. The scent and taste are very bitter. The Mouthfeel is medium in body with good carbonation. Overall it's ok there are other offerings fro Roak that are better....imo.

Tried on draft at holiday inn, at DTW airport. Really interesting beer. Very earthy, grassy ipa. A bit of a sticky mouthfeel, but very dry, grassy bite like a rye iPa. Great beer of your having only 1 or 2.

Poured into a snifter this beer has a hazy orange body with a white inch thick frothy head (nice lacing). Smell is of bread-y malt, citrus, pineapple, grass, and orange. Taste is earth-y, grass-y hops, with a citrus, pineapple, tropical fruit, bread-y malt, caramel, and a bit of pine. It is on the sweet side, just a bit dry, with a medium body and light to moderate mouth feel.

My first beer by this brewery, with so many breweries opening up In michigan almost ob a weekly bases it's hard to try them all. This makes me want to try a few of there other beers. Great golden amber color. Smell hoppy. Taste is dencent. It's a malter ipa. Worth a try.