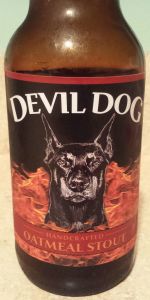 Many thanks to @beergorilla for this awesome trade.

Devil Dog pours a pitch black body, forming a pinkish beige head that dissipates to a ring within a minute. It is 100% opaque with no light shining through.

Aromas of oatmeal and lactose, and slight roast malt. Bouquet is faint however unless severe agitation is applied.

Taste...now this my friends, is how to do an oatmeal stout. A fabulous balance of oats, lactose sweetness, milk, roast malts, and just a touch - a gentle touch - of coffee. The whole thing is just bam. Right on the money. Only thing I'd change is the slight metallic presence that surfaces after a few sips - but even then it's only on the far fade of the finish.

Feel is creamy, robust - yet not too heavy, with a proper carbonation and a wet finish with semi-dry undertones.

Overall impressions : ....impressed. If there were ever a textbook way to do an Oatmeal stout right, this is it right here. Head was a bit lacking, slight metallic presence could be done without, and maybe just a touch more cocoa...but otherwise...wow, what a fantastic effort. I'm actually nitpicking here. Two thumbs up.

Only had two brews outta these guys so far and since I was in the area I figured I'd stop in and try this one on tap. Have a feeling this one is gonna be something special. Enough talk, let's get to the beer.

Look - From the tap into a pint glass. Poured an impenetrable black with a finger of mocha colored head. Borderline oil like just barely lacking the thickness. Carbonation is impossible to get a read on due to the depth of the color. Head drops down to a ring around the edges of the glass at a moderately fast pace. Lacing does not remain after the pint glass has been emptied into my gullet.

Smell - Rather unique to say the least. The oats are very well pronounced and really take a hold of things for the most part. White chocolates and just a touch of astringency which is a bummer but not enough to kill the nose on this one. Small amounts of what I'd say are blueberries come through as well as the beer warms up a bit.

Taste - The taste is a virtual complete match to what the nose led you to think it would be, minus the astringent off flavor. Oats really shine through with this one and the white chocolate esque aspects meet in the middle. Finish is rather roasted and bitter with a smidge of coffee bean coming through on the end.

Feel - Body is one of the fullest and most oil esque I have ever had. Carbonation is higher than I had expected and the finish is overall wuite creamy. Flavors all retain exactly as they did in the taste and the beers swallows easy as can be. Not sure what the ABV is but if it's high it sure as hell doesn't show.

Overall - A very solid oatmeal stout easily on par with the other beers I've had out of these guys. One I could drink more than a few of, and I likely will since I'm not driving. Will certainly be back, and will certainly purchase more beers from these guys on shelves. One of my favorite new breweries. Give 'em a shot if you're in Michigan.

Fantastic brew, glad it was my first from Roak. Poured from bottle to nonic pint. Filled three quarters of the glass with dark, thick liquid and the rest with, rich mocha head that looked the thickness of chocolate cake. Aroma is roasted espresso beans, dark malts, and cocoa. Taste follows with an incredible smoothness. Would have again and again.

The best beer I've ever had ! I don't drink anything else anymore .This damn beer is ridiculous! I guess I love oatmeal stouts .I've tried alot of different beers in my life and this one is the best !

Pours a pitch black color with head that thins to barely a lace. Smells of sweetness and roasted malt aromas. Taste is the same as smell sweet roasted malts with just a hint of bitterness. The alcohol is noticeable. Overall a really good oatmeal stout. Only negative hear is the lack of head.

Thanks to Superspak for this one, in NBS BIF #4, MWK. Poured into 10oz goblet. Poured a solid black color, with no head, thus no lacing, even though the label says it has a thick head. Aroma has solid grain and roast, very low hops. Very similar taste profile. Body was solid enough, perhaps a bit thinner than I prefer. Drinkability was good, I'd have this one again, if it were local to me. Solid brew.

This beer pours black in color with two inches of mocha head that leaves decent lacing.

I smell hints of dark chocolate and roasted malt.

The taste is everything you would expect out of an oatmeal stout. I get dark chocolate, roasted malt, and some black coffee in the finish.

This is a solid oatmeal stout. There is nothing fancy about it. It just embodies all the qualities of a good beer with no frills. It is definitely worth a try.

Very nice beer that has the taste of coffee and cocoa. Malt forward but balanced with earthy hop flavor. Taste of metal lingers. Alcohol is well hidden and body is a bit thin. Lacks the creamy feel of an oatmeal stout.

I picked up a bottle of Roak's Devil Dog a couple weeks ago for $1.79 at The Lager Mill. I haven't had the best luck with this brewery. but I'm interested to see how this one turns out, so lets see how it goes. 2015 Vintage. Poured from a brown 12oz bottle into a teku.

A- The label looks nice, it goes with the name and it's a little eye catching. It poured a nice black color that didn't let any light come through and it had it just a slight bit of tan head that died down to a very thin ring thin ring that faded away and it left just a little bit of spotty lacing behind. This is a nice looking beer, but I wish the head and lacing were better.

S- The aroma starts off with a higher amount of medium sweetness with the roasted malts being the first to show up and they impart a nice roasted aroma with just a little bit of char to it and it's got some nice dark chocolate like aroma. Up next comes the yeast which imparts a fruity dark fruit juice like aroma. This beer has a nice aroma, but I wish the fruity yeast was toned down a little.

T- The taste seems to be similar to the aroma, but lighter and it starts off with a higher amount of medium sweetness with the dark roasted malts being the first to show up and the impart the same aspects that they did in the aroma with the chocolate sticking out the most, but as a whole the roasted malts are lighter than they were in the aroma. Up next comes the fruity yeast which imparts the same aspects, but this time they are a lighter which works out better than it did in the aroma and it's followed by a little bit of watery flavor. On the finish there's a higher amount of light bitterness with a roasted and light chocolate like aftertaste. This is a decent tasting Oatmeal Stout, but I wish it was a little more robust.

M- Smooth, crisp, a little creamy, on the thicker side of being medium bodied with a higher amount of medium carbonation. The mouthfeel is nice, but I wish it had a little less carbonation.

Overall I thought this was a decent beer and I thought it was pretty close to being average for the style, it seemed like it was headed in the right direction and it was pretty true to style, but when it came down to it this beer was a little rough around the edges and it held this beer back. This beer had ok drinkability, one is enough for me, I don't think i would want two in a row. What I like the most about this beer is that was true to style, it didn't have anything that was off for the style. What I like the least about this beer was the taste and carbonation, they could both use some work. I wouldn't buy this beer again, but I wouldn't turn one down and I can't say I would recommend it. All in all this beer was decent, but it didn't have anything that made it stick out or made it a very good example of the style and that made it a little rough around the edges. It's not a favorite Roak beer and it's pretty close to average for the style. This is a decent beer, but it could use a little more work.

I received this 12 ounce bottle from my Dad for Christmas 2016. I didn't have high hopes for this beer because I had never had any from Roak Brewery. For an Oatmeal Stout it was very solid. I would definitely recommend this evil looking Devil Doberman Pinscher beer to anyone looking for an Oatmeal Stout. BTW, this rating gets me to 400 Beer Karma points to become a Devotee. Yay! Thanks Beer Advocate!

The Devil Dog was delicious and made me slobber. The beer poured an opaque dark with ecru head that did leave some lace. The scent was roasty with slight coffee flare. The taste was a great blend of roast and espresso. The mouthfeel was fuller in body with smooth carbonation. Overall....OH YEAAH.....this is a good one.