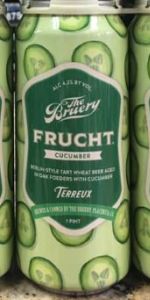 Rated by entheos from California

O: it's exactly what it says it is; having said that, it's not for me;

Reviewed by TinFang from California

3.54/5  rDev -9.7%
look: 3.75 | smell: 3.5 | taste: 3.5 | feel: 3.75 | overall: 3.5
Pint can packaged 4/27/21
Appearance - clear bronze, light head, settled quickly.
Smell - vegetables
Taste - borderline undrinkable since it's so sour, and I like sours. Definite cucumber flavor - tastes like a whole cucumber in the can. Distinct foeder taste. I ended up putting a large handful of crushed ice in the glass which resulted in a still fairly flavorful beer. Good for hot weather.

3.51/5  rDev -10.5%
look: 3.5 | smell: 3.75 | taste: 3.5 | feel: 3 | overall: 3.5
Pours a slightly hazy golden yellow, fizzy 1.5" head that quickly recedes, no lacing. Nose is essentially bread and butter pickle brine with its mix of salinity and sweet malt notes, along with some light oak. Taste, however, plays much more towards a straight sour pickle - tart, salty, and bracing. Carbonation is a little light, however, and the overall feel is a little heavy given the moderate abv.
Jul 24, 2021
Rated: 4.2 by BMBCLT from South Carolina

Reviewed by aasher from Indiana

4.5/5  rDev +14.8%
look: 4.5 | smell: 4.5 | taste: 4.5 | feel: 4.5 | overall: 4.5
A: Poured into a new Belgium globe to a light golden orange beer which was topped by a dense and slightly rocky finger of white head which fades quickly to a collar around the edge of the glass with minimal lacing
S: Smells of cucumbers and sourness with a hint of oak
T: Taste is pretty tart on the front end with some nice cucumber flavor along with a touch of oak and creamy wheat. On the swallow there's more creamy wheat, tartness, and cucumbers.
M: This beer is fairly light in body but I would not consider it to be watery. Carbonation is effervescent and slightly prickly while the beer has a drying finish due to the acidity.
O: Overall this is another nice addition to the frucht series. Really nice cucumber flavor on top of a very solid base beer. It's like sour cucumber infused water if you're into that sort of thing.

Reviewed by Red5StandingBy from Maryland

O: I hate the taste, but it’s probably a pretty good BW.

Nose and taste is where the scoring becomes odd. It’s sour. Too much so. It kills a lot, including any “weiss” part, but not the cucumber. That comes through quite nicely, actually, more in the nose than taste. The latter is less because the vinegary sour mostly masks it until you stop puckering. Of course, there’s some pickle thoughts involved here, but not as directly as you’d expect from my description.

Anyhow, overall, it’s way too aggressively sour but shows a nice amount of cucumber to bring it back towards the Mendoza line. If it were at least half as sour, maybe a third, I think it would be much better.

Rated by donspublic from Texas

A mildly hazy orange with a rapidly receding white head that leaves no lacing, this looks decent. The nose a blend of potent lactic acid, sharp and biting with a surprising amount of cucumber flavor. With both the green skin and the watery flesh and seed character present, this is quite deep. Mild grain and wheat. The palate opens quite bracingly tart with a strong lactic acid character, so much so that it hides any funk and depth that could be present. It also hides the grainy wheat that's likely present. What's not hidden is the prominent cucumber flavor. Juicy, pulpy, seedy and deep, it's quite delicious. Until the sourness takes over. Too sour, making this seem harsh and unrefined, especially on the rough finish. A fruity sweetness is present, tempering the sourness but not entirely. Decent in small quantities, undrinkable in the quantity sold.

A - Poured into a Kate the Great tulip a nice hazy golden orange hue with a thin white head that fades quickly.

S - Aromas of super bright cucumber and lemons. Like it wants to go pickle but there no vinegar. Light coriander. Incredibly summer and bright.

T - Taste is similar to the nose with loads of tart vinegar and acidity, nice creamy wheat and coriander loads of bright lemons. There are loads of cucumber flavour here, great fresh cucumber notes.

O - Overall this was a very solid Berliner. The cucumber is wonderful with great acidity. Really like this!