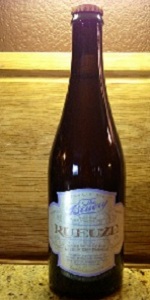 A - Darker shade of gold with a soft white 2 finger head. Fades into thin ring with minimal lacing. Looks enchanting.

S - Starts off with a tart and sour aroma. Fresh lemon juice, green plum, and sour grapes. Funk is light and there is a slight woody character.

T - Huge bright tartness that is bordering on sour. Lemons. green plum, and sour grapes. I detect faint funk and some wood, even a bit of vanilla.

O - Pretty tasty Gueuze style that is readily available in many places that helps make the price easier to deal with.

Spot on for style and by far the best US Gueuze I've had. Better then many Belguin brands. Worth getting.

The palate is aggressively acidic. Definitely acetic acid is present. Not as pleasant as I'd hoped. However, it's not over the top with acetic acid. There's definitely plenty of fruit on the palate, and juicy lactic acid as well. I may be trying to justify me spending the money on this one. There is an interesting salinity on the finish.

I want to like this more. While it is closer to a proper gueuze than many American efforts, it doesn't quite have the finesse I enjoy in the style.

poured from a bottle into an oversized wine glass

Look: Deep copper orange look. small head that held for a while then eventually dissipated.

Taste: Citrus and some funk on back end. lemon, blood orange. tartness really shows in after taste, it lingers for a second.

Mouthfeel: it tastes a lot fuller than it looks. it almost looks a little watery after sitting in my glass a while. but the mouthfeel is medium bodied IMO. Definitely could drink a few of these on a hot day.

Clear orange with a small to moderately-sized near-white head that quickly recedes. This beer doesn't have a lot of carbonation, especially given the noted style of gueuze. Leaves the glass nearly clean, though it leaves small spots of juicy stick. Only average.

The aroma is perhaps the best aspect of this beer, though it's not anywhere close as complex, enjoyable, or funky as Belgian examples of the same style. Some definite lemon and sharp citrus notes, bit sour character, and some definite funk (sweaty sock) character.

The flavor is nice, though it simply lacks depth. In one of the most complex tasting styles, this one doesn't have similar depth. That being that, what's here is delicious and certainly worth drinking. Sharp, bright, and sour lemons and perhaps some apricot, sock sweat funk, and moderate-to-high sour character. Dry finish.

Medium bodied with extremely low carbonation. Watery after less than a half hour in the glass. This beer's true failing, if it has one.

Good, and affordable, but not great.

Served out of a bottle

T- The oak comes through a lot, followed by lemons and citrus

O- One of my favorite Gueuze style shelf beers. I always seek it out.