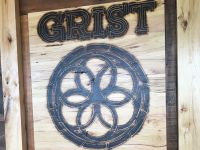 Large, warehouse like building on a knoll overlooking the lake. Very spacious interior opens to a quater circle bar that seats about 20, with plenty of tables in the room and on the large deck in the back. 10 beers on tap,I had the Life's Lemons, it was ok. Friendly service. I only had an appetizer that was mediocre maybe their other food is better...
.

The food was fantastic! My friends and I had a feast and everything was great. The beer selection was decent but the vibe was the best part. This was a state of the art bar with great lights and lots of seating. They had about 10-12 house beers on draft. I would definitely go there again.

Nice facility and a good selection of good beer.

Following a hike in Watkins Glen State Park, my family visited this brewpub on a temperate sunny summery day. The place seems very popular...there seemed to be a steady stream of patrons. The bar is large and open, and there is plenty of outdoor seating. We had two pizzas, and the buffalo chicken was exceptional. The beer was average, although the cream ale was notably good. Plenty of games and the views of the lake were spectacular.

Stopped here after pestering my wife to stop at least one brewery while we were around Seneca Lake. The facility is very nice - almost too nice. Upon entering I wondered if we were even at a brewery; it had the feel of an expensive restaurant. The seating area was nice and large, with exceptionally high ceilings to give the place a very open feel. The brewery area was viewable beyond the bar, which, on the day we were there, was extremely busy. This was a little disappointing for me because I would have loved to have talked to the servers or maybe the brewers about their beers. Oh well.

They also had some live music going on, which I guess is nice to draw people in, but again, I was there for the beer and would have liked to have discussed it.

Anyway, I was a little taken aback by the price of the flight - $10 for four beers. I know it's the Finger Lakes and they can get away with charging that because of all of the "drunk bus" visitors they get, but still, it was a little off-putting. But I went for it anyway, hoping that the beers would be good enough to justify the high price.

They weren't. It wasn't that they were bad beers, I just don't think they went much beyond mediocre. It's a fairly new business, though, so I'm hoping in a year or two I can go back and be pleasantly surprised.

Didn't get any of the food.

Pros: Beautiful building, gorgeous view of the lake, live music (if you're into that).

My wife and I stopped in to sample the beers today. Well, I sampled the beers. Nice facility in a truly beautiful Finger Lakes setting, with Seneca Lake and rolling hills in the background. Make no mistake, this is wine country, so Grist Iron certainly sticks out.

The atmosphere was casual, seeming to mainly be populated by tourists, which is rather expected in the Finger Lakes during the summer. We were quickly attended to by a waitress, who was very knowledgeable about the beers. They only brew four beers of their own, so they do offer other breweries' products, including PBR on tap.

I thought the beers were quite good and certainly interesting--a cream ale and an English mild are not exactly fashion forward--if not expansive.

The service was outstanding. The waitress was knowledgeable about the beers and very friendly, willing to answer my various questions.

Note: I did not have any of the food. I did like all four of their beers.

In all, a nice beginning. I hope they find a foothold and prosper.

New place that was an awesome facility. Too bad the beer quality didn't match up to the place. Beer was poorly made and very expensive. $10 for a flight of 4 beers. And the service was sub par. I will give it another shot, but the place was dead and the service was poor. Can't imagine if it was busy.