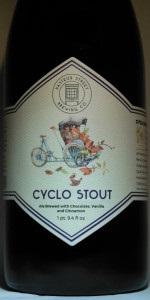 Notes: The addition of award-winning Marou Chocolate cacao pods in this full-bodied Chocolate Imperial Stout provides a deeply rich aroma and velvety texture. Cacao nibs are harvested and hand-picked in the Mekong Delta by Marou; chosen for their complex profile. This robust beer is then complemented with local cinnamon and vanilla. Cycle Stout is lovingly produced in small batches and hand labeled in Ho Chi Minh City.
View: Beers | Place Reviews
Reviews: 16 | Ratings: 38 | Log in to view all ratings and sort
Reviews by DenverHopHead:

A: The beer is jet black in color. It poured with a short tan head that quickly dissipated, leaving only a ring of bubbles around the edge of the glass.
S: Moderate aromas of dark chocolate malts and licorice are present in the nose.
T: Similar to the smell, the taste has a lot of licorice flavors along with notes of dark and chocolate malts.
M: It feels medium-bodied on the palate and has a moderate amount of carbonation.
O: This beer hides its alcohol very well and tastes nothing like something that is 13% abv.

L: Poured from a bottle to a pint glass. Had a deep, dark mahogany brown color and a thick consistency. There was a thin, tan-colored, foamy head that quickly dissipated. Not a whole lot of lacing.

S: A decent, if a little muted, aroma of roasted malt, cinnamon, chocolate, and vanilla.

T: Tasted of a small amount of hops (mostly in the finish), a good shot of cinnamon, light vanilla notes, some chocolate notes (not quite enough), a bit of roasted malt, and a tinge of burnt sugar. Not necessarily a bad flavor, but certainly a little bit underpowered. Some of the ingredients (e.g., the cinnamon), were well represented, but others were not. Still, oddly tasty.

F: An average amount of carbonation with a smooth finish. Medium-bodied.

O: This is a solid, yet uneven stout. Nevertheless, it's worth a sot.

Poured into a Fremont small snifter. Pours a very dark mahogany brown, appearing nearly opaque black in the glass, almost perfectly still with only a few stray bubbles. Aroma of dark toasted malt, dry biscuit malt, oaky vanilla, rich cocoa. Flavor is dark toasted malt, vanilla, cocoa, brown bread and a hint of coffee. Finishes with lingering vanilla, cocoa and dark malt. Light to medium bodied with some good carbonation, which is a relief after the still pour. This seemed to be somewhat a cross between an imperial stout and an American strong ale in profile, with toasty malt, but not much char or malt depth, lots of vanilla and cocoa flavors. I have to say that if I drank this in a blind taste, I'd say for sure it was barrel aged; the vanilla is well done and tastes almost oak barrel as the source. It has an unusually light body for either an imperial stout or strong ale, which is odd, because the flavors are fairly robust. I'm torn between a little disappointment in the body and malt robustness and being impressed that this has so much "barrel" character using just vanilla and cocoa nibs. This tastes great and the alcohol, although not totally hidden, is fine considering the 13% ABV. I enjoyed this as a big strong ale that has good stout character. It is exemplary for a stout from an area with little craft footprint. I would like to see other offerings from this brewery, but at the price point, hopefully in a more manageable sized bottle.

A: Pours a thick dark brown, near black, with a thin tan head that faded into a thin collar leaving soapy lace down the glass.
S: Booze and cinnamon nose dominate with hints of sweet chocolate and vanilla. Smooth but hot smelling.
T: Follows the nose with notes of rich chocolate, surprisingly spicy cinnamon, vanilla, and a kiss of caramel. Dark fruit finish, vanilla and toasted marshmallow aftertaste.
M: Full body but exceptionally smooth mouthfeel with no alcohol burn at all. Tastes like a beer half the percent. Slightly greasy, low and smooth carbonation.
O: Alcohol hidden well, smooth and easy to drink. Tons of chocolate flavor but great combination of integrated cinnamon and vanilla flavors.

A: Khaki-tan colour head of poor retention (sub 30 seconds). No lacing is left as it recedes.

Body colour is an opaque black.

Appropriate for an imperial stout, though this appearance doesn't make it stand out from acclaimed international expressions of the style.

AROMA: Sweet chocolate, chocolate malt, dark malts, authentic vanilla bean, and sure, some cinnamon when I search for it.

Aromatic intensity is below average for the style.

I love that the malty sweetness doesn't overwhelm the more interesting vanilla and chocolate notes, but this aroma is simplistic for the style and suggests a reticent brew lacking depth of flavour.

TASTE & TEXTURE: Soft, silky, and creamy to its credit, with the requisite full body in place to support the rich malty character of the brew.

Chocolate and chocolate malt are evident but reticent, and the vanilla flavour - while authentic - is shallow. Cinnamon is anything but overt, if present at all.

Dark malt sweetness gives this a rich backbone without ever delving the beer into dessert beer territory.

It's balanced, with a subtle burnt character providing the bitterness needed to offset the malty chocolatey sweetness. But it's far from as intricate as the finest beers in the style, and would benefit from more diversity and depth of flavour; coffee and roast would be welcome (seeing as Vietnam has some of the - if not *the* - best coffee in the world), but more critically the beer doesn't commit to the flavours it does endeavour to showcase: the chocolate character is generic, the vanilla anything but evocative, the cinnamon absent.

A marshmallowey gooey vibe starts to emerge as it warms, but there's no follow-through.

Well-carbonated. Not sticky or syrupy. Not oily, gushed, hot, boozy, astringent, or harsh.

OVERALL: Its ABV is impressively well concealed, and it's a drinkable imperial stout - definitely more approachable than your typical North American sipper. Impressed as I am by its quality for its place of origin, it doesn't offer anything that hasn't been done better by too tier imperial stout producers in Denmark, the U.S.A., Canada, Sweden, et al. Just because you're the fastest kid in the special Olympics doesn't mean you can run with the big dogs. This winds up, in the context of international expressions of the style, a forgettable but nice example of an imperial stout.

More commitment to local flavours (especially civet coffee and coconut) could really take this to the next level, but as hard as I am on it, it's tasty stuff.

No date that I can see.

A: Pours jet black with a very very tiny brown head. The head is only like 1/8" tall but it somehow doesn't disappear for a while. Weird. Only spotty specks of lacing here and there.

S: Notable dark chocolate in the nose with hints of vanilla bean. Cinnamon in there too, pretty subtle.

T: Sweet vanilla up front, turning into a very bitter dark chocolate. Roasty too, which adds to the bitterness. Cinnamon kicks in in the finish, with a small amount of heat. Aftertaste is lingering cinnamon, light chalky dark chocolate and more heat.

M: Heavy and a bit spicy. Not nearly as heavy as you'd expect for 13% though.

O: Interesting brew. Heavy on the bitter roast/chocolate flavors with a decent kick of heat. Not harsh at all which is surprising given the ABV. Not overly sweet either like a lot of big stouts like this. Surprisingly well balanced in fact. If anything the heat from the cinnamon stands out the most.

Pitch black in color, it tops with a finger of frothy tan head that stays for a while before collapsing to some bubble along the edge and leaving limited amount of lacing, a pretty good showcase considering the ABV.

The aroma is intense of roasted malty goodness with its creamy chocolate, coffee, cocoa powder, caramel, vanilla, cinnamon, burnt sugar, sweet cereal, and dark bread. Hop is also there with some spiciness and slight citrus.

Rich sweetness takes the lead with notes of cinnamon and burnt sugar, then it is roasted, creamy chocolate, coffee, cocoa, caramel, vanilla, dark bread, as well as hop spiciness, and strong bitterness from both roasted malt and hop. The end and aftertaste is well lasting with roasted and bitterness taste.

Full and bold body with just slight stickiness, smooth mouthfeel with some crisp and moderate carbonation, finish is pleasantly dry.

This one is of course a big and bold Stout with prominent coffee, chocolate, and cocoa character. Alcohol is quite hidden thought.

A nice twist on the russian imperial stout for warmer climate, you know like Vietnam. The cinnamon brightens up the finish in a hurry, so the taste goes from dark chocolate, malt, to a rush upward with cinnamon and vanilla. The body is silghty chewy and grainy, but thinner, does not feel like 13% abv. Interesting overall, don't know if I would want more than one glass.

Got it from Pasteur brew pub in Hanoi, a newly-opened one.
Great beer! Dark black with a good amount of white head. Sweet, full of molasses taste, chocolaty, coffee taste. However, alcohol is quite present. It can be seen easily.
Excellent brew. I'd love to have another one!

Poured into a wine glass. A dark opaque brown color with a medium sized tan head. Nice lacing in the glass. Cinnamon, roasted malt, vanilla, and a fairly subtle chocolate aroma. On the first sip, I was struck by the relatively thin feel of this beer, and it distracted me from the taste as I was expecting a pastry beer. Not overly boozy though. The cinnamon was there - not overdone but certainly dominant. The vanilla and chocolate were understated relative to the spice, but there. The chocolate was somewhat dark and bitter - a good thing to me. Not overly dry but this was a refreshing departure from the overly sweet pastry stouts. Overall recommended. This is a unique beer that grew on me with every sip.