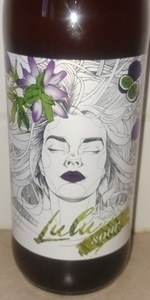 Notes:
View: Beers
Reviews: 3 | Ratings: 11 | Log in to view all ratings and sort
Reviews by ogman:

L - Pours a hazy orange-copper with 2 finger off white head.
S - Really malty with the fruit tones coming in at the end and something strange like...almost the same as the smell of a fresh opened can of dog food. I have never smelled something like this in a beer and I dont like it.
T - light and refreshing. BA says this is an American Wild Ale? I certainly never would have guessed that. Sweet maltiness with a hint of hop bitterness and the fruit coming in the end. Extremely one dimensional. Sourness level is pretty low.
F - Moderate carbonation and thin. Refreshing sipper on a hot day.
O - Just a really basic beer. I don't have much negative to say other than the strange smell but I don't have any praise to give either. I paid a little over 2 dollars for this beer on clearance at binnys and don't feel ripped off nor do I feel like I got a deal. I would happily drink this poolside if someone offered it to me but I would not actively seek it out.

Pours murky, gold in color with 1/4 inch head. Taste is passionfruit, blackberry, and sour mix. Sour, moderate carbonation and light bodied. Makes for an above average semi-fruity sour. Would have liked a bit more sour though.

Not a fan of this fruit/sour style. This was a bit more like a spritzer and less a beer per se. Thin head with berry dominated aromas (mostly raspberry I think). Red/orange copper color. No bitter taste but carbonated. Not very sour.