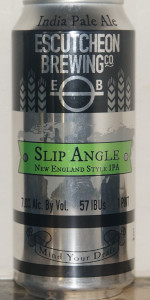 I got a late start on NBS (Week 774) & I did not finish up my DelMarVa (+ DC) adventure as planned. 8=( Further, I promised that NBS (Week 775) & now, Week 776, would be dedicated to the wonderful beers sent to me by @jkblr who seems to have a real handle on my drinking habits. CANsparency is key in these things! As a result, I am going to CANcentrate over the next few days on eradicating everything that would have CANbined to form the finale of the DelMarVa (+ DC) adventure. Sit down, strap in & hang on. It's gonna be a wild ride! That last one kind of put me off of Maryland, at least for the moment, so it's time to visit some of the other victims, I mean, honorees.

From the CAN: "New England Style IPA"; "Mind Your Draft"; "Our Slip Angle IPA is a New England Style IPA which definitely 'lists' heavily to the hoppy side. Purposefully hazy and juicy, this beer is definitely unbalanced and we hope you enjoy the dry hopped flavor."; "When grain is transported in bulk onboard a ship, an important consideration is the 'Slip Angle' of the grain. The Slip Angle of grain is around 20°, which means that if the ship rolls more than 20° the grain will shift which will cause the ship to develop a large list to one side. Any additional rolling will cause the grain to shift even further which could cause the vessel to capsize." 8=O

That is MY lingo! I was both a Deck seaman & later a Storekeeper, both involving keeping stowage, rolling, listing & potential capsizing in mind! Super.

I made sure to do some in-CAN agitation before CANtinuing on to the Crack! of the vent. Once I was satisfied with my rolling action, I let fly with an inverted Glug to really put the crew on edge. It worked out a little too well, putting even me on edge, threatening to overrun the gunwales and scuppers! Away the swab & flooding detail! Our CANtinuous training & meticulous attention to detail paid off as we were able to CANtain the CAN's CANtents within the skin of the glass. Phew! The massive three-plus fingers of dense, foamy, rocky, tawny head looked as though its retention was going to take forever to fall. 8=( On the upside, it did leave a load of beautiful lacing in its wake. Nose was mostly grapefruit (a trend?) with some pine and light caramel malt. Mouthfeel was medium. The taste pretty much mirrored the nose. I did not feel that it really came up to its billing as delineated on the CAN's verbiage, but it was still a pretty good beer. I might have been jaded by the previous beer's intensity, but this simply seemed to lack Ooomph! Finish was dry & bitter, but was that the extent of what they were going for? Hmm. Not bad, but not great, either. YMMV.

Appearance: The beer is a beige-orange color with an abundance of visible carbonation. The massive carbonation is churning up these large chunks of sediment that are in the glass. The body is extremely hazy and full of floating debris. The head is good sized and has a cobweb consistency. It has very good retention that is supported by the obviously high carbonation. The beer has good lacing.

Aroma: There is a bit of mint, some rosemary, and some grapefruit peel aroma. It has a very herbal scent.

Taste: Up front there is a spruce flavor along with a strong grain character. There are notes of caramel and a slight hint of mint. It is a bit tea-like.

Mouthfeel: It is on the lighter side of medium with medium-low bitterness. It finishes a bit muddy.

Overall: Although the beer has a great head and a nice color, it is marginalized by the chunks that are floating around in the beer. It has an alright flavor and aroma profile but the can states that this is a "New England Style IPA." It tastes a bit more like a hazy version of a classic East Coast IPA, and most people looking for a New England IPA would be disappointed. The can also states that this is "hazy and juicy" when it is realistically more chunky and herbal. As a New England IPA it is below average, but on its own it floats around the average mark.

Wow, I can't believe that this beer has been on BA for over a year and doesn't have a single review. Well, I'm stepping up to the plate and I will get a base hit. Poured from a 16 oz. can. This beer came out very quickly despite a gentle pour, resulting in a hazy dark golden color with a 2 inch head. Same is of citrus, tropical fruits. Taste is the same as the aroma, juicy, moderate bitterness. Feels medium/full bodied in the mouth and overall is an enjoyable beer.

Great presentation. Nose is a little weak but citrus and a little pine come through. Medium, almost full,
mouthfeel. Solid citrus with a sweet/bitter balance, some pine and a little caramel. Nice surprise.

The Slip Angle is one of the Escutcheon Brewing's main offerings year-round. It does not disappoint and it has remained a steady refreshing NEIPA I can turn to when I want some hop-density and smoothness.