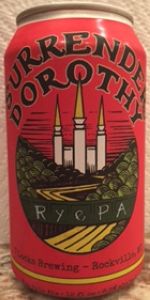 Notes: A medium-bodied, copper colored ale. A slightly resinous and citrus hop aroma combined with the slight spice imparted by the rye makes for a unique take on a hoppy beer. The result is a well-balanced Rye Pale Ale.
View: Beers | Place Reviews
Reviews: 8 | Ratings: 33 | Log in to view all ratings and sort

Guppy314 from District of Columbia

From a can, pours as a cloudy dark brown with a thin khaki head. Light spicy hops aroma. Loads of citrus hops with a sort of sharpness from the rye malt. Nicely, all the flavors are full and lasting; no wateriness and (thankfully) not overly sweet.

From a can at Pizza Pizzaria with the Franke fam. A spicy aroma and nice carbonation. Lots of bitter flavor between the hops and the rye. Such a great spicy change of pace.

It is both Election Day & Guy Fawkes Day & I am off work due to the schools being closed for some inexplicable reason, which I plan to get to the bottom of once the election results are released. The reasoning used to be that the schools were used a Polling Places, but not any more. Hmm. It is a teacher in-service day, though. Hmm. BUT, the schools are OPEN on Monday, which is Veterans' Day! 8={} I am on the ballot as an "NPA (No Party Affiliation)" against five (5) very p.o.'d (at me) Democrats with six (6) of us vying for five (5) open positions! 8=O Were I NOT on the ballot, a straight party vote would be their simplest & straightest route to victory. 8=) I voted, for myself only, first thing this morning ~ 0730 & am now sitting back with The CANQuest (tm) awaiting the results, sometime > 2000h. Like I said, once the results are in, I'm getting to the bottom of this!

From the CAN: "Drink Maryland[,] Drink Responsibly"; "As the monotony of the Beltway winds west, towards the land of a witch not so nice, weary travelers round a bend. Suddenly, spires sprout in the distance, and a message from the witch herself lurches into view, beckoning us to surrender our ruby-hued comrade … now clutched in our hands after the long road home became a little more golden."

I Crack!ed open the vent & was duly surprised by a light fingertip spritz due to its being a brimful craft CAN! 8=O I then started a slow, gentle C-Line Glug into the awaiting glass since I clearly had no idea as to what to expect. Unexpectedly, I got two-plus fingers of dense, foamy, rocky, tawny head with very good retention. I was further surprised (okay, not really) by its Deep-Amber/Light-Copper to Copper color (SRM = > 13, < 17) with NE-quality clarity. Nothing really surprises me any more as I am deeply into my 54th year. Nose smelled EXACTLY as it should with a bracing jolt of black peppery mintiness. Mmm. Ahh, the addition of rye malt to beer … fabulous!

The reluctance towards its use has historically been its ease in breaking down in the mash tun. Clean-up MUST begin swiftly after transfer to the brew kettle as it will CANgeal into a goopy, sticky mess that will require a jackhammer & chisels to remove. The max used to be 15% of the grain bill, but I am hearing of nearly 50% now! 8=O I knew a homebrewer who had purchased an upgrade to his existing, worn system & decided to do a nearly 100% Rye Beer as his last since it was all going to the S/C anyway. We watched in fascination as it broke down SO quickly that he was barely ready for the transfer! It was a fantastic beer when it was ready, but both of us drank through our allotments so quickly that it was gone & we CAN now only reminisce about it. No commercial enterprise is going to do that in a beer, but the revival of Rye Whisky is a close seCANd.

Mouthfeel was medium. A solid medium. The taste was wonderful! The minty pepperiness was prevalent throughout, just the sort of thing for a chilly Autumn afternoon as the last of the leaves fall from the branches. I am having a light lunch & CANtemplating a wee dram of Rye as an after-dinner, after-drink drink. Finish was cool, spicy & dry. Nothing else CANpares to a Rye Beer, IMHO. YMMV.

Just under three fingers in height off the pour, off white in color, with some decent fine soapy to swiss cheese like bubbles. Nice retention and a little bit of staying power. Faint copper body, a bit rusty in color but with some clarity, and maybe a faint hint of haze.

Pretty solid aroma. Light touches of grassy hop, maybe a bit earthy and some faint citrus, but also a good mixing spicy malt to go with it. Simple and complimentary malt and hop nose, nothing major but just nicely done.

Palate continues some good vibes. Somewhat creamy mouthfeel with a good spicy malt, and limited dryness. Quite a surprise for a rye based malt brew. Hop angle is even a hint juicy, with light grapefruit, and mixes real nicely with some biscuit qualities also. Creamy sweetness makes a good appearance on the tongue and finish for a good accent.

Being in the DC area the Surrender Dorothy label grabbed me, referring to the Oz-like towers of the Morman Temple on 495. But I discovered a very smooth rye beer, eminently drinkable with good taste, OK color, and decent finish. I've tried several rye beers and this is best so far. A little pricey, not too easy to find, but I'm sticking with it.
Thanks 7 Locks.

Sometimes you see a beer and say "Yeah, that's probably just a cool name and a marketing dude who earned their bread, but I'm buying it anyway." This is one of those. I am also thinking it may have to do with those towers that dart into the sky as you head west on 270 off of I-95. Moroni or some dude. Anyhoo..

Big rye in the nose is a plus. Spice and hops. Solid look with sweet head and lace. Flavor is more understated than expected. Smooth texture and tasty but a not much in the spice or bite department. Kind of mediocre in the finish. Not bad, but a bit of a tease.

Not bad. Not as carbd as I'd like but that's ok, probably effected the minimal nose on this. Rye smooths this IPA out. Relatively low ABV for IPAS I like to drink but this one goes down easy. A nice local alternative

Dark, gold-orangish, opaque appearance. Nice head that quickly fades. Spicy rye & citrus hop notes within the aroma, a touch of resinous pine/dank as well. Taste follows up on the nose, yet the malt seems to distract from that spicy citrus character in the nose. While this is balanced rather well, maybe some more dry hopping would have helped? As a rye ipa fan it is hard not to compare this to atlas rowdy. Rowdy comes out in top, but seven locks is showing some early promise here.