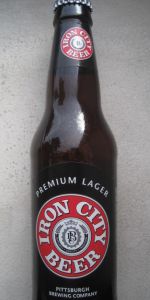 It really only comes into it's own when you drop a shot of Jack Daniels into it and guzzle it down. Cuts through the dirt and dust of a hard day's work and makes you proud to be a Steeler's fan.

Taste is a little sweet. Bonus. No hops, barely cooked malt. Very watery. No mouthfeel, just the same barely there affect going on. Drinkable like water, but a little pricey for what it is. Pretty hard to drink, can't see what you would be doing drinking this unless you wanted a buzz and hated your life.

Presentation: 12 oz brown long neck twist off bottle with no freshness date to be found.

Appearance: Pale golden and very clear with large bubbles racing to the top that struggle to hold a thin white lace.

Smell: Cooked veggie aroma, some husky grain and that is all in the nose.

Taste: Mild crispness from a medium level of carbonation in a light body. Very slim on the malt, lots of grain and husky flavours with vague astringencies. Hops are brash but small and only help to enhance the astringent flavours. Light lemony hop seems out of place. Touch of cooked veggie and corn grit flavour, finishes dry with a lingering faded veggie flavour.

Notes: Not very clean at all, better off just sticking with a Bud, Miller or Coors than tangling with this brew. A sub-premium American Lager that is not worth my time.

Forty of Iron City, this was and continues to be a staple of my hometown. I have found myself low on cash as of lately, and I figured what better times to go back to my roots. Pours a true golden tone with a highly carbonated thick white head that could be compared to the billowing smoke clouds that that left the steel mills of Pittsburgh's past. Everything about this beer says it's classic, you have to love the old school label. The aroma is a very faint bitterness with some sweet tones hidden in there. The taste however is the true reason to throw back this beer, it is a crisp American lager not too watered down, definitey packs some flavor. The sweetness of corn and rice adjuncts is the backbone with some mild hop bitterness here to form one great summertime lawnmower beer. Not an all grain beer but much better than the adjunct ridden garbage Anhueser Busch throws at us. I will definitely "drink local and think globally" in this situation. A light to medium body that is true to it's American lager profile. I will always keep a place in my heart for this historic beer of the city I was born in.

thanks to fellow ba mtanji for this sample. poured a light amber color typical of this style of beer. not much smell to speak of. taste is not much of anything. mouth feel is as of water. Drinkablility is that if you want to get drunk without tasting what you drink, this is your beer.

Iron city is a clear light golden color with a small white head. The head did not last long and left no lacing. The aroma is sweet and sort of grainy. Its taste is also on the sweet side, mainly grainy, and boring. It is light bodied and fairly thirst quenching if you can tollerate the off-taste.

First off, let me say that I have pretty studiously avoided reviewing macros because I just cannot see the point. They are not very well made, they usually do not score well, and lots of people have tried them, so it's not as if I am imparting new information.

That said, let me now say how much I love drinking Arn (that's Pittsburghese, the local dialect for Iron, or Iron City). I grew up and remain a life-long resident of Lancaster, almost 300 miles from Da Burgh, but I have been a die-hard Pittsburgh sports fan for over thirty years. Going out there means three things to me: 1) a sporting event of some sort; 2) a Primanti Brothers' sammich; and 3) some Arn, no matter whether bottle, can, or draft. When I was stationed out in California, I used to ship cases out when home on leave. In Da Burgh, the place to have an Arn is on Stillers gameday at the 222 Bar, or the Three Deuces, or the Deuces. It is a great dive joint that Buk would have love in his prime and man, do they move the Arn! Ask for Jerry and Heide and tell 'em Woody said to give you an Arn Jump Start. You'll get Arn in some form, whichever is most handy at the moment. That said, howzabout a review, eh?

This poured with a thin head, despite a vigorous pour, then just evaporated to wispiness. The nose is light, smelling vaguely of malt and alcohol, but nothing in particular jumps out. The mouthfeel has an interesting tang. The finish has a light maltiness. This did not improve with warming. Instead, some sharp, off-putting flavors began to appear and these forced me to finish it quickly.

OK, back to Woody's Soapbox. So it wasn't any great shakes, so what? Does it invoke memories of sitting with my departed Pops as a kid, watching Bucs and Stillers games? Hell, yeah! Will it remain my lawnmower beer of choice until, Heaven forbid, PGH BC closes its doors or is bought out? Hell, yeah! Will I continue to bring cases, sixes, 40's, et al to tailgates? Hell, yeah!

Enjoy drinking local beers when I am out of town so gave this a try because its been in Pittsburgh for awhile but pretty not owned locally anymore, regardless gave it a try. Didn't enjoy it that much. Sometimes can beer doesn't taste the best but still didn't like the taste nor the mouthful. Smell was sub par and had left a bad aftertaste with me. Wouldn't recommend it.

Pours a light yellow with a ton of carbonation bubbles.

Faint and boring aromas in the nose. Whiffs of vegetables and sour cream.

Light toasted grain backbone with a hint of vegetables. Flavorless and boring overall. A weird sugary-cream taste takes over the palate. Best served as cold as possible and even then, it's a stretch.

This is one of those beers that after all these years I'd never tried. I even went to college in Pittsburgh but somehow the Stroh's 30-pack was more appealing. Picked up a case of this a few months ago and was surprised at the price - about $18. Poured ok, decent golden color, not much foam though. It was the taste that really got me. At first it was like any other macro, but then an odd, sweet aftertaste (almost sour - is that corn?) kicks in, which completely turned me off to it. It's not undrinkable (I actually got through the case, eventually) but it's not something I would purchase again.

Clear light gold colour. The white head poured with lots of large, fizzy bubbles, but these disappeared almost as fast as they appeared. Crisp malt nose, faint spicy hops. Mild vegetal aroma as well. Same characters in the flavour, along with very mild bitterness and a hint of cider. Finishes sweet and off-dry, some acidity as well. High carbonation and light body. It didn't quite work for me.

All right, I list serving type as bottle, although it is an aluminum bottle as pictured... so it's really more like a funny shaped can. Oh well, that's not what is important.

I poured this into my pint glass... got a very low head that almost immediately disappeared. The body was clear and yellow, and really unimpressive. A little carbonation.

Taste was similarly unimpressive. Slightly sweet, a little bitter, and grainy, with a faint hoppiness.

Mouthfeel was quite thin and watery, somewhat bland. Drinkability is OK, overall, for a macro. Actually, since I had chili for dinner, I can see how it would go somewhat well with something spicy.

My wife's dad offered me this can as a bit of nostalgia (he requested it from a friend who recently trekked to Pittsburg for a Steelers game). You see, he heard the ads for Iron City on AM radio broadcasts of Pirates games that he used to be able to hear on clear summer nights in the late 1950's in upstate New York. While I'm typically weary of beers from a can, I had to try it for nostalgia's sake.

The can had a cool retro look... made me wonder if it was good marketing, or just a holdover from years ago. The beer poured a golden color, deeper than those mass-produced beers, with a decent creamy white head. The smell was that typical American lager smell that I just can't seem to elaborate on. As for the taste, it was surprisingly somewhat tasty... mildly sweet malt with a touch of hops, mild hop flavor but no bitterness. The mouthfeel was nice, and there was none of that metallic flavor that always seems present in canned beers (this one was apparently relatively fresh). It was a much more enjoyable and drinkable beer than I expected. Not a bad choice if you find yourself at a Steelers game!