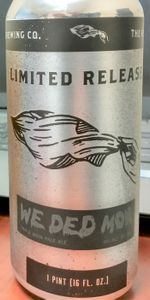 Notes: We Ded Mon is the natural progression in our Broz series. You start off with a nice little Broz Day Off(IPA), which leads into a Broz Night Out(DIPA), that ultimately reaches a point that We Ded Mon(TIPA). Clocking in at 11%, we hopped this triple IPA just like the rest of the series with 100% Citra hops.
View: Beers | Place Reviews
Reviews: 22 | Ratings: 140 | Log in to view all ratings and sort
Reviews by AzIpaGuy:

I think hoppy beers are best around 6-8%, beyond that they get too malty or too damned hot. But then The Veil drops this gourmet shit on us. Mouthfeel you want to just chew on. Citra bombs on your tongue. Some heat on the end but come on now.

Sure, this can was old as the date on the bottom read 10/25/16 but this held up *really* well as there was very little sediment at the bottom of it and the Citra hops came through nicely with the rest of it's flavors. Sure, this was strong but it never tasted or felt it as this was really slick, juicy, and full of inherent weed that meshed in nicely with everything else!

Not a bad pour to this as the liquid was a cloudy goldenrod with plenty of light coming through to keep it from looking too heavy. Lots of citrus, onion, and dank weed in the muted nose as that served as a precursor of the taste to come. Loads of white chocolate, nectar sweetness, citrus juice, and onion spice on the taste as this exploded on the palate. Dank, sweet, and slick at the same time, this was really impressive on the tongue as it took a few sips to really get it down pat. The malt was recessed enough to let the flavors shine as the aftertaste felt like a while chocolate dessert that just wouldn't quite go away...

There was plenty of booze in this but you wouldn't know it based on it's lasting effects. A bit dry like white wine, this had enough going for it that that didn't even matter, as the taste grabbed my attention from the first sip and never let go. Quite an interesting beer and one that I'd love to have again, but a bit fresher the second time around!

Appearance: pours a super cloudy golden yellow color with a short 1/2" head that breaks down quickly.

I am super-excited to pull this CAN from my reefer & make it a part of The CANQuest (tm)!

A Crack! of the CAN's vent & I was underway. I beCAN with a slow, gentle Glug, but it quickly became obvious that this was a hazebro TIPA! 8=( No need to hold back in that case. I really unleashed only to be surprised by the creation of just a finger of fizzy, foamy, bone-white head that quickly fizzled its way out of existence. Color was a cloudy Yellow-Gold (SRM = 4 - 5). Nose smelled extremely tropical, especially of pineapple with a hint of orange/tangerine with a sense of the garlic & green onion mentioned by @gopens44 although not as strongly as in Oskar Blues' Gubna. It also had the bready yeastiness of proofing dough. Mmm. Mouthfeel was medium, a bit weak for this style. The taste was an interesting, if not unique, mélange of hop-driven flavors, ranging from tropical fruit to citrus fruit to pine to garlic/green onion, all on a pillow of rising bread dough. 8=O Other reviewers have remarked on its insane drinkability & I want to (late) seCANd that opinion! Jeez-O, man, but this was like the sweet spot in terms of its hops bitterness/bready yeastiness, making it highly drinkable until I looked down at the speedometer & realized that I'd been cruising along at 110 per with 11%! No wonder things seemed to be flashing by! No wonder the fuzz are chasing me with their bubblegum machines! No wonder I'm taking the exit at four times the posted speed limit! No wonder this beautiful turquoise 1956 Thunderbird & I are blasting off for points unknown! Finish was … finishing. Phew. Wonderful! Man, if they CAN resurrect me, I'll be back with more ... stuff!

Appearance: Arrives a cloudy golden color, the head rather modest; a few spots of lacing

Tasty: Juicy citrus tones, up front, with the tangerine and grapefruit zest burgeoning; some pineapple and green onion, through the middle, resinous and dank, with a hint of booze in the finish

Overall: Nice use of the Citra hops

The beer comes in a medium to deep gold, full hazy.

The aroma is juicy for days. Mango, pineapple, grapefruit, hints of lime and lychee, with a ripping green herbaceous.

The flavor follows with that mango, peach, orange, tangerine smoothie, with light biscuity malt, and BAM! The booze hits hard. It's like a tropical really stiff Screwdriver or if someone had poured grain alcohol into your favorite New England style DIPA. The burning down the throat and warming on stomach lining is no joke on this brew.

The beer pours a nice white foamy head that dissipates fairly quickly but still leaves a nice ring around the inside of the glass. The beer itself is a cloudy yellow orange color but is a bit more transparent than others of a similar style.

the smell is good. It has a nice and strong orange smell with a slight hint of grapefruit in the finish. There is also a slight booze note to it but not by much.

The taste also has a good orange note with hints of pine in the finish instead though. The malt note comes out a bit like toffee but it's very slight and does not come out much.

The feel is good. It has a medium body with a bit of thin feel to it and goes down smooth.

Overall, this is a good beer and a good representation of the style but doesn't really stand out among the other TIPAs.