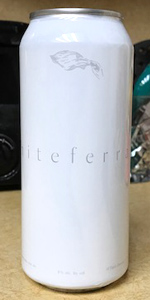 Notes: Whiteferrari is a beer that has been a long time in the making. We've been experimenting with different malt and hop combinations through other recipes, trying to find what we believe is the best of both worlds rolled into one DIPA. Clocking in at 8%, this luxuriously soft DIPA is hopped intensely with 50/50 Citra and Galaxy(and a ton of it!). We used the freshest crop available of each hop to give this DIPA the most expressive hop character possible. We truly believe this is one of, if not the best hoppy beer we've released(and we hope you agree!).
View: More Beers | Place Reviews
Recent ratings and reviews. | Log in to view more ratings + sorting options.

S: Lots of sweet sugary tropical fruit, I get some nice orange, tangerine, hints of lemon and grapefruit rind, very tropical and juicy.

T: Lots of tropical fruit, get some nice tangerine, orange, lemon, grapefruit rind and a stronger Grassy bitterness. Sweet but the bitterness helps balance the sweetness.

O: This is a very juicy IPA that packs a decent bitterness punch at the end.

Reviewed by RVABeerFan777 from Virginia

Reviewed by VoodooBear from Puerto Rico

Appearance: The thick, rocky, two finger head stays around for a while and leaves behind a lot of thick lacing that covers the entire glass in patches and rings. It's a murky, straw color.

Smell: It's a rich, mostly earthy aroma of fresh cut grass, herbs and pine. There's some fruit notes in the background of pineapple and peach.

Taste: It's a soft, fruity flavor of cantaloupe, peach and grapefruit. A very soft, almost imperceptible bitterness shows up on the edges of the palate as it goes down.

Mouthfeel: Pillowy, creamy and very smooth with a medium body and low carbonation. It's still quite refreshing.

Overall: A rich beer with a lot of different hop notes that's deceptively easy to drink at a higher than average 8% ABV; thanks in part to the very low bitterness.

Reviewed by uvachief from Virginia

4.53/5  rDev +2.3%
look: 5 | smell: 4.5 | taste: 4.5 | feel: 4.5 | overall: 4.5
White Ferrari is an 8% IPA juice bomb. Pours a creamy and very cloudy brilliant yellow with 2 full fingers of thick white head that quickly dissipates. Smells of lemon and other citrus flavors. Hint of hops. Taste is exactly as it looks. Thick and creamy in the mouth with a blast of citrus - mainly lemon. Clean and crisp on the finish. No ehtanol burn. Really enjoyable.
Apr 29, 2020
Rated: 4.06 by gbiello from Massachusetts

4.37/5  rDev -1.4%
look: 4.25 | smell: 4 | taste: 4.5 | feel: 4.5 | overall: 4.5
Canned on 8/23/18, I picked this up at The Veil after having a sample of it on tap there but of course, it took me a while to get around to my review of this. The look of the beer held up well over time as it was one of the smoothest examples of a New England IPA that I ever had. The full body hid the subtle complexity that this had as there were quite a range of flavors and notes to this beer. All of them melded together harmoniously as this was an enjoyable and fun beers that I've had here in quite a while!

This had a pour like orange juice with a solidly cloudy appearance to it and just enough head topping it off to fill the remainder of my pint glass. Not a lot of lacing was left behind aside from a few soapy sections near the top although they didn't resemble rings at all. Spelt grain, scallions, onions, dank hops, sweet citrus, and orange cream were in the nose as a deeper sense of forest, urine, grass, herbal tea, and weed came through in the taste as the depth of this really shone through once it warmed up. While it may not have been the most alluring array of notes, this *did* work as my palate warmed up to it, as the beer itself warmed up.

There was enough booze in this but there had to be something that tied everything in this together since there were sweet, creamy, dank, spicy, and hoppy attributes to this beer. So much going on here the basic, cracker backbone to the malt allowed the lovely interplay between hops and flavors to run their course with the end result being a brew that could stand it's own with any from this neck of the woods. So glad I was able to get a hold of this and bring it home for a proper review!

A very drinkable beer. The 8% ABV is well hidden. An intense alcoholic version of Orangina. Not an orange juice milk shake IPA. An IPA with the great qualities of both the Northeast and West Coast IPAs. Love the white label – understated but informative. 4.5

S – Aromas of citrus, orange pineapple (none of which are overwhelming). Some faint spiciness, maybe even a hint of sulfur. 4.0

T – More hoppy bitterness than fruit. Piney and resinous followed by lesser amounts of grapefruit and then even fainter pepperiness. 4.25

MF – Medium-light bodied, a bit thin/watery with a dry finish that quickly peaks with a poke of acidity on the roof of the mouth and then fades away. 4.5

Reviewed by rjal from New Jersey

Taste - Taste is more tropical fruit. Pineapple, mango, citrus peel, grassy hops, alcohol does not come out as much in the taste.

Rated by pkalix from California

Aroma starts off with ultra dank pineapple and a tropical medley, a little mango here, a little peach there, with some slight cream, and eventually fading to ripe white wine grapes balanced cleanly along the rest of the bouquet.

Mouthfeel carries a great medium body with a carbonation fading beautifully into a smooth, resinous prickle (and thinning so slightly) through to the finish; dry in parts, juicy in others, it almost feels too simple on the palate, but the balance here is something else.

Great expression of balance between dank and juicy. Sounds like I’ve mentioned it a million times (probably because I have), but the harmony shown throughout this brew is just excellent; dank, juicy, soft, prickly...it strikes all sorts of even-tempered variety to make it one ridiculously easy-drinking DIPA.