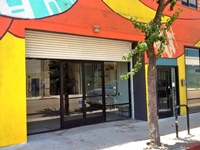 So glad I visited here! Great vibe and music...good customer service and really good selection of brews...not in the best part of town and parking is a slight issue, but nice place!

The brewery itself is located in a part of Los Angeles where there are quite a few homeless people- just an observation that didn't bother me, and it's not an issue during the day at all. Parking is on the street. Vibe within the brewery is nice, with relatively upscale wooden furniture. A large number of taps available with mostly IPAs, but also a couple of stouts (Stick Figures). They fill growlers and have bottles to go. It's a straightforward selection. Service is very solid, attentive bartenders who will strike up a conversation when things are slow- and it was slower as I showed up at open. I enjoyed hanging out there and there is certainly plenty of space for a good crowd.

My 300th taproom! I loved the vibe and the beer. The service wasn't all that great. I felt like I was bothering them, asking for a beer. Other than that, this is a great place. Maybe I caught them on a bad day.

Got to try their smoked maple porter and thought it was fantastic. This place reminds me of an ice cream parlor..an ice cream parlor that serves beer. The bartender was nice enough to check a recipe for me. May not be a place you can spend a lot of time in, but definitely worth stopping in for a pint or 2.

Brewery nestled in skid row staffed some generally good seeming guys who have sadly succumbed to the hipster-douche influence. Welcome to Smog City, I guess. What did I expect coming to a brewery called "Mumford"? At least the beer is better than Verdugo West's...

Enjoy the harassment from local homeless as you approach the doors of this gentrification magnet. Lock your car doors, lads.

Beer is served in shaker pints at New York level prices (and at L.A. level quality).

They call their Belgian enkel a "single" because why Google it, right? Oh well, at least they didn't stylize it "singel." (And hey, our consumers are obviously uncultured idiots, so they'll appreciate the clarity...all you have to do to make a Dutch word English is reverse the latter two letters apparently).

They're steering into the skid of the hazy IPA fad. Can't blame them - that's where the profit is - but though they can afford proprietary hops (e.g. Mosaic) they aren't making very good use of them.

I didn't have any food; apparently they serve pretzels (per the website) but there was no signage in the brewery. I suspect if you can order them, there's at least a 20% markup.

So long as these cats chase trends they'll be fine since rent in skid row is low. Smog City's denizenry is craving beers better than the Golden Road schlock that's plagued the city for years, so I can't blame them for trying to convince themselves this brewery's beers are on par with those from San Diego, the Bay area, and hell, even the central coast.

The beer, to be fair, is above average. And that would suffice if they were putting it out in sixers at $10 or less.

I guess I'm just not seeing any inspiration, originality, or passion in what they're doing whatsoever. I can't knock wanting to cash in on trends, and they're probably only a "lupulin powder triple dry-hopped" marketing gimmick away from generating lines for can releases, but there's not a single beer on-draught that seems like the brewer(s) actually wanted to craft it, and you can only ride the homerism wave so long afore it crashes.

Wouldn't care to spend a Friday night here, nor would I recommend it to others, but in a town as desperate for decent local beer as Los Angeles, I'm unsurprised this is somehow garnering fans for itself. And when people will pay $12+ a four-pack, I have to tip my hat to the owners...this business could be genius.

I recently visited during their soft opening. I have to say this is probably the seediest area I have ever visited a brewery in, but I was able to find a spot away from the homeless encampments. They only had 4 beers on tap when I went, but they are planning on brewing many more as time goes on. The quality was great with the beers coming across as quite fresh. All of the staff members I interacted with were friendly and informative.

This is a new brewery right on the outskirts of Little Tokyo in Downtown LA. The interior is very spacious, with lots of sitting area. It has a modern, somewhat industrial motif to the place. It's very clean. If you visit here on foot, don't venture too far south of this building, as that's where you'll start to see our urban campers.

At this point, they had 4 beers on tap. I liked the Black Mamba the best. I did notice the beer was served warmer than I would have preferred.

They sell pretzels, but you're welcome to bring your own food. There's a restaurant two doors down. And, then you're very close to restaurants in Little Tokyo as well.

I'll visit again when they have new brews on tap. Good luck.

Mumford Brewing in Los Angeles, CA
Brewery rating: 4.12 out of 5 with 485 ratings