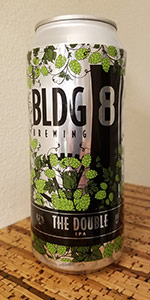 Clear, bright, golden with a thin creamy lace that sticks here and there and hangs out until the end. Clean nose with notes of pine, grapefruit, and bread. Body is lighter than expected, and I dig it. Crisp and super creamy too. Grapefruit right out of the gate. Zest, rind, flesh, and juice. All of it. Bitter. A little dank. Sticky resins. Pineapple and mandarin orange. Some toasty malts with a hint of caramel helps to round things out a bit, but the hops dominate and continue to assault the palate. A bit peppery in the dry finish. You know it's coming, but that 8.2% creeps up on you.

Don't sleep on The Double. It's a damn good West Coast-style Double India Pale Ale from an East Coast brewer. If I had local access, it'd easily become a go-to DIPA for me. I wish I had more!

16oz can: this one pours a slightly hazy golden color. There was a small off white head that didn’t linger long but did leave some lacing. Nice nose! Tropical, citrus and some pine hops. This has a really nice flavor. There is a wonderful balance of the aforementioned hops. A fair amount of bitterness with a good malt body behind it. A really good DIPA. Worth searching out

A: Medium-dark gold-orange with some yellow highlights - light chill haze, but mostly clear - medium size, off-white head, fades to a wispy cap, fades to a small-medium collar, leaves some impressive streaks of lacing

S: An old-school hop bomb, which is not an insult - oily citrus, with some orange and grapefruit rind - floral citrus - herbal and grassy hops - loads of pine and pine resin - some sweetness in the malts, with some graininess and biscuits - light touch of alcohol

T: Aggressive and brash - some citrus, mostly orange zest and oily grapefruit peel - huge pine notes, loads of resin, and some grassy/leafy hops - very bitter with some lingering pith and touches of aspirin - solid malt base, with some bread, caramel, caramel grains, and biscuits - finishes mostly clean but with lingering resin

BLDG8's IPA is memorable, but is their DIPA? It's definitely memorable for how aggressive it is. But that may not be the best thing. It drinks like a tribute to relatively old-school West Coast hop bombs, except perhaps with even more resin. It's great, if you're into that type of DIPA, but it's not going to be what many are looking for these days.

Had this on tap at Seymour in Greenfield. The beer had a burnt orange appearance with a large head that dissipated over time, leaving some patchy lacing. The aromas were mostly a yeasty-bready smell with a bitter flavoring to the taste. I did like how well carbonated the beer was; very crisp and great body. Overall, I found the beer ok, but pretty refreshing.

Pours a foggy amber color with 2 fingers of fluffy off-white head. The head has excellent retention, leaving a few spots of patchy lacing before settling into a blanket of foam.

The aroma brings plenty of grapefruit, orange rind, and sticky pine. The malt is present but only just.

The flavor is all about that earthy pine, with notes of grapefruit, orange pithe, and overripe mangoes. There's some sweet caramel malt hanging out in the back.

The feel is medium bodied with pretty lively carbonation. Nicely crisp, yet creamy with a bitterness that gently coats the tongue.

Overall, a great West coast style DIPA that is deliciously fruity with a bitter hop punch that knocks you in the teeth. Nicely balanced and drinkable.

A new entry, just out today, from this young, IPA-specialist local brewery whose first three IPAs have been very well-received.

a: Clear amber with a two plus inch white head which receded slowly to thick surface foam and dense lacing.

t; Follows the nose but moderately over a medium biscuit/bready malt base, encouraging a bigger swallow. Dry finish with virtually no lingering bitterness.

o; Perhaps more of a West coast style than NE, but a great one which is surprisingly easy drinking for a double but no slouch in the hop bitterness and flavor dept. either. Costs 25% more than their regular IPA with almost 2% higher ABV, but should be popular due to its flavor and exceptional drinkability.