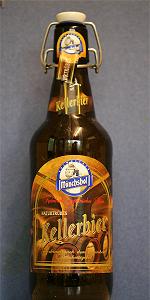 Blind-tasted except for the beer's name, ABV% and brewery/country, zero reviews below read (yet!)...
L- Deep amber and notably cloudy, despite being well rested and with minimal handling. This is not at all a negative FWIW, I just think it's the default look even with care taken so... those who don't do notable haze/sediment might not get on with this. Pours with 1Cm white foam cap. ps @ +15mins, the head holds really well.
S- Quite malty.
T- Initially brighter than expected, into deep malts with some toasty richness, then a minor dry hoppy lick into the finish.
F- It's well balanced between pretty full malts and balancing hops. Net result is it's a pretty 'solid' beer, perhaps even beyond it's quite meaty ABV%. Carbonation in the mouth remains really good.
O- It's very pleasant, ideal for colder months as it's pretty robust. Sessionable probably. But then sessionable also because there's not much here to get worn out or jaded with - little of individual character notes beyond the deep 'wall of malts'. - I wouldn't buy this again as it's just not standing out versus other Kellbiers I've had recently and can buy for a similar price.
Review/scoring all done, now the reveal, I get to read the lables to see what I missed!
500ml bottle £3 BB: 31/12/21 Bought from TremblingMadness, York/UK as part of a large pick-your own consignment to London.

S: Buttery and malty. Faint grassy hops. No skunk at all. German yeast.

T: Good warm or cold. Very forgiving. Tastes traditional and a little sweeter than most. It has a character of it's own, I'm supposing due to it's bottle conditioning. Buttery biscuity malts that give the hop and yeast flavors plenty of room to introduce themselves.

O: Highly nuanced yet moderate in all aspects.

A rather nice Kellerbier featuring a great balance of grainy, toasted malt and bitter, herbal hops, with some nutty, fruity accents lending a certain complexity to this. A very enjoyable brew that bridges the gap between crisp drinkability and subtle complexity very nicely and is kinda impressive coming from Kulmbacher. I've had better Kellerbiers, but not many.

Fliptop bottle poured into a dimpled mug.
The appearance was a nice muddy/murky amber to brown color with a sturdy finger and a half's worth of white foamy head. Dissipated finely to leave some wavy lace, sly cling to it.
The aroma had sweet toffee wafer malts with butterscotch, sweet wheat/grains, earthy hops and an ever so slight touch of meaty tones. Subtle fruity esters (pomme-like).
The flavor leaned towards the sweet end by combining all of those prior mentioned aromas. Rich and malty running through a rugged aftertaste of dry woody to butterscotch qualities.
The mouthfeel was about medium bodied with a good sessionability about it. Carbonation felt good. Semi-clean finish of butterscotch, toffee wafers and biscuits. Some chewy malt.
Overall, I believe most of the kellerbiers I have reviewed on BA have been American versions in which I have liked fairly well. However, I believe that this is the real deal for the style of how they are supposed to be brewed. I like this for me and would love to come back to.

Pours a deep amber color with a massive crown of thick head.

Smell is bready and floral with notes of wheat dough, hops and some citrus.

Taste is floral and slightly yeasty. Nice bready base with a bit of sweetness, and a soft bitterness over top. Some citrus and dough are present as well.

Roasted nuts and fruit are upfront on the palette. Very much like the aroma, although I also taste dates, nutmeg, and cloves as well. Quite florescent and herbal, combined with the roasted malts and bread malts it's complex yet pleasant.

Hazy caramel color. Slight root beer barrel candy smell and taste to start. Finishes with well balanced flavor and little after taste. I really enjoyed this beer and would get it again.

Pours dark and dirty as sin ... finishes sweet like the temptation that got you there.
As a home brewer, I strive to clone this one

Poured from the bottle into a pokal style glass.

Creamy khaki to off white topped colored head on the pour. It forms very fluffy and nicely, with some very good retention. Body color is a muddy but pleasant chestnut looking brown, maybe a bit of orange color thrown in there too. Very very fine carbonation as well.

Very nice nose. Quite a good fruity sense off this brew. Smells almost like a bit of strawberry character which is quite nice! Light classic touches of caramel but not sweet sensing, almost more of this raspberry fruit tangy quality which is quite a bit impressive.

Nice palate if a little less than I was expecting. Light bodied nearly wet with a good sense of minerality, but not holy supportive of the passing flavors. Mid palate has a touch of herbal spice and clove, nearly comes off minty in a way. Finish just barely hints at some creamy fruity qualities, strawberry and raspberry particularly. Clean, particularly tangy fruit, but finishes quickly.

Interesting keller with some neat unexpected flavors, but seems to not really last on the palate. A bit more body to this and we have a real neat tasting brew.

Pours a cloudy brown color. Remains cloudy even after its had time to settle. Thin off white head dissipates leaving no residual head but sticky tan lacing is left along the glass.

Smell is rather bready with some nutty malts, a hint of spice, and some lager yeast. Simple but good.

Taste is somewhat bready with some roasted nut notes. Spicy finish with some grassy floral notes. Surprisingly complex flavor for a rather simple beer.

This is really a nice kellerbier - surprisingly complex given its simplicity. Ill definitely revisit this one in the future.