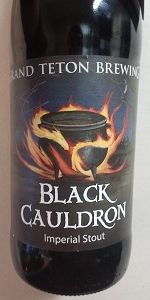 Notes: There are few styles of beer more flavorful than Imperial Stout. Our thick, rich version is brewed with plenty of caramel and roasted malts and subtly spiced with Cascade and Super Galena hops. We accentuate the natural smokiness of the brew by adding a small amount of beechwood-smoked malt. At 22.5 degrees starting gravity and 9.5% alcohol by volume, this beer boasts flavors of chocolate and coffee, along with raisins and dried fruit soaked in sherry.

We brew our Black Cauldron Imperial Stout to recognize and honor the women in the history of brewing. Brewing has been women's work since the dawn of civilization. In all ancient cultures, beer was a gift from a goddess, and women maintained status and power through their skills as brewsters. This remains true today in indigenous cultures from Asia to Latin America, Africa to remote villages in Scandinavia. Around the world, women bake bread and brew their own beer.

In Europe, the rise of cities brought commercial brewing, as governments realized the potential tax revenue to be had from large breweries. By 1445, the first all-male brewers' guild was established, the campaign against witchcraft burst forth across Europe, and the purge of women from brewing had begun. Beer historian Alan Eames has written that, when an occupation was listed, most of the women burned for witchcraft in Europe were brewsters or alewives.

Most of the imagery we associate with witchcraft today originated with the brewster. The large black cauldron bubbling over with foam? A brew kettle, of course. The black cat? Necessary to keep rats out of the grain store. The tall pointed hat? It allowed the brewster to be seen over the heads of taller men in the marketplace. A broom? The symbol of household domesticity, it is still associated with brewing all over the world.

Without the work of these women through the ages, it's entirely possible beer would not exist today. To learn more about the role of women in today's brewing industry, visit www.pinkbootssociety.org. For more on the history of brewing, www.grandtetonbrewing.com.

This one pours a fairly dark black color, with a small head, and a little bit of lacing.

The taste isn't quite as good as the aroma, but it's still good. There's a lot of dark fruit here - it's almost tangy, with a nice warming smokiness, and tons of roasted character. There's dark chocolate, too - and a bit of coffee bitterness. There's definitely a lot going on for a no-frills imperial stout here.

This is not super thick, but not thin, with a decent level of drinkability. There's not much booziness here.

This is a pretty wonderful classic take on an imperial stout.

Smell: It has aromas of roast and subtle smoke. There are some light coffee notes in the background. There are also subtle sherry and dark fruit notes.

Taste: There is a balanced combination of roast and smoke with a low level of coffee and dark fruits. There are some sherry notes in the back ground with floral.

Feel: It has a full body with a slightly harsh bitterness which actually enhances the flavors as opposed to taking away from them.

Meh...after dosing my pallet on Expedition the last week may be the reason why this is just so-so for me...Beautiful pour and visual but not much body . Kind of sweet for a RIS

Poured from a 750ml bottle into a Spielgau stout glass.

Before I review I'm gonna be honest, I'm watching the Disney movie Black Cauldron. I've been waiting to watch this movie with this beer for awhile hahaha.

Look is pitch black with a tan thin head.

Aroma is roasted malt and a milky sweetness.

Taste is a lot more roast that gives way into a milky sweetness.

Pours black as pitch with a 1"+ head of dark brown foam perched atop. Head has decent retention but, as expected, drops to an ethereal ring within a few minutes.
Smell is rich with roasted malts, chocolate, molasses as well as lesser notes of smoked wood, dark fruits and wet cardboard which dissipates as the temperature increases.
Taste is full of toast, malts, molasses, chocolate, dark fruits (fermented) and whiskey. Balance is incredible.
Smooth as silk, warming from the start and increasing as the temperature rises. Full bodied without being cloying, this is a sipping beer for sure. 9.5 % ABV is noticeable but not overpowering.

Sampled at Boise’s Imperial Stout get together, over 120 bottles to choose from. Going with the flow on this rating. pours out a nice black topped with a tan head. A nice sweet aroma. Some hops and dark roast in it as well. Taste of coffee, bitter hops, and chocolate.

Good thick black viscous appearance, 3/4" tan head on the top of it. Aroma had substantial alcohol and roast to a lesser degree.

On tap at Growler Grlz