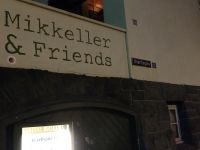 View: Place Reviews
Reviews: 7 | Ratings: 18 | Log in to view all ratings and sort
Reviews by Sparky44:

Too bad about the no name pizza it was astounding.

Went here with my wife on a Saturday night. We had a couple locals, a couple Mikkeller's. Vibe was a bit more touristy. It was a good stop.

Very chill place just off the main drag in central Reykjavik. It's in a building that used to have a restaurant called "The Pizza place with no name", but that place is closed. The building now has the restaurant Dill on the ground floor (Reykjavik's only Michelin starred restaurant), Syster on the floor above (the replacement for the pizza place, and literally the sister restaurant to Dill, but more casual, inexpensive and with a nice cocktail bar), and Mikeller and Friends on the top floor. The bar itself is teeny, tiny, but you can spill out into the casual dining room just outside to hang and eat. Taps are excellent- a variety of excellent Mikeller offerings, a well chosen selection of Icelandic crafts, and some very food crafts from the UK, USA, and other Scandinavian countries to round things out. Pours are very expensive, but this is Iceland. Food is very good, but really just snack- loaded fries with Kimchi and cheese, KFC (Korean fried chicken), pork/fish rinds and the like- they are from Syster, though, so quite good if on the pricey side. Great place to hit up.

After a very long day of travel, the wife and I got to Iceland around 6:30am. We did a bit of driving around the ring and finally made our way into Reykjavik. Had lunch up the street the saw Hellgrimskirja. After all of that, I was ready for a cold beer.

We walked up and down Laugavegur and I saw the word "Mikkeller", so I stopped immediately. I wanted to make sure the lack of sleep wasn't playing tricks on my eyes and brain. Sure enough, a quick check to BA proved this mirage was in fact a true oasis amongst the volcanic Rick desert.

Rather small place, just like everything else here. The bar is on the second floor. Loaded with taps of Icelandic beer. I was unsure of the prices, but knew I would get torn apart, so I was delicate in my choice. I knew anything too alcoholic would be cost prohibitive, but didn't want to spend $10 on a 3.5% pale ale. I chose an IPA for 1400ISK and was mostly satisfied. At that price point it is hard to have more than one.

Lovely little place but like everything else, quite pricey.

Stopping in after the Secret Solstice Festival, I will be making my way back after a 2 week trip to enjoy more beers at my new favorite beer bar in Reykjavik.
Greeted by their brand "Mikkeller & Friends" on a 3 story building, their bar is located on the second level. Their print is of famous Ringling Brothers and circus clowns and goes well with their 1940s decor. Draft list was 10/10, solid with a good mix of Sours, Stouts, and IPAs. If you want a barrel aged or rare beer; look no further. They are second to none in this department.
HIGHLY recommend if you are in the area. Staff is super friendly and helpful as well. Keep up the good work!

Colorful, semi-psychedelic decor in a small, attic like space above a wonderful gourmet pizza shop. The pizza shop folks were kind enough to let us bring beer from upstairs while we ate.

Incredibly enough we visited during an Other Half tap takeover. I was very glad to try two stellar IPAs from them plus an imperial stout from War Pigs. All were priced at 1800 isk, or $16-$17 each. Ouch.

The bartender was awesome. Very knowledgeable and eager to talk beer. I asked which of the 6 OH IPAs he recommended and like a boss he just starts pouring his favorite. We had a fantastic experience at this place, highly recommended.

The Mikkeller & Friends bar is upstairs at this address. The lower level is a gourmet pizza place and cocktail bar. Wall paintings and decorations are eclectic. We ate downstairs so that is what the food rating is based on.

The place is fairly small - there is a tiny bar with a couple stools but then another room with tables. They have 20 taps of beer from Mikkeller and other Scandinavian breweries like To Ol. Decent variation of types of beer.

Beers are available typically in small or larger glasses. As with other bars in Reykjavik, beers are VERY expensive. Small glasses of 20cl higher ABV beers ran from 1200 to 1800 ISK. (about $12 to $18 USD).

Another cool bar in Reykjavik. If you think of this as a house, this bar is on the second floor whereas the restaurant is on the first floor. Go up, and it's like drinking in a decked out attic. Fun place, lots of Mikkeller beers available on draft. Good vibe, though prices are fairly high- even higher than expected for Iceland. Still, a fun meeting place to have a couple beers.

Micro Bar, which is just down the street, is phenomenal. We spent a good hour there in our first night in Reykjavik, figuring we'd found our primary wind-down spot. But then we walk around the corner, past a court filled with food trucks and around the Prime Minister's house (seriously) and happened upon a very quaint little hutch-shaped joint marked "Mikkeller and Friends." Of course, we had to go in: up a steep flight of stairs, round a little corner, into beer heaven.

I've ever been to any other of the M&F locations, but I gather each has a different theme. The Reykjavik franchise aims to evoke a turn-of-the-century circus. As much as I loathe the hipster tendency to copy the aesthetics of old-timey rich people (Gatsby parties can seriously go fuck themselves), old-timey poor people stuff is still appealing, especially when handled so deftly.

The decor isn't quite trippy but it's certainly unique. The storefront itself is narrow, maybe about half the length of your average American bar. The bar area features track lighting and a very comprehensive chalkboard listing nearly 2 dozen tap selections. There's a primary seating area alongside the bar, which features Mikkeller artwork, and then attic seating upstairs.

Everything else is wonderful, though. The crowd and bartenders are friendly. Even on a solistice Saturday night, with the rest of the city descending into drunken bedlam, M&F remained peaceable and friendly. I asked why this was, and the bartender explained that this was the sort of place people go to to have 1 or 2 nice beers. The Severe Drunkards, myself notwithstanding, frequented louder joints that served hard liquor and don't cost so much.

So, I guess I learned to embrace gentrification. That, or I was too plastered to care about spending $50 on three beers. Anyhow, it was really nice and you should go there.

Mikkeller & Friends in Reykjavik, Iceland
Place rating: 4.49 out of 5 with 18 ratings