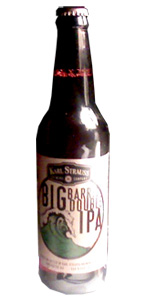 On tap; into a snifter.
Appearance - sunset orange; nothing breathtaking, but nothing to turn away from.
Smell- I'm not hooked, but there has to be something here.
Taste- there it it is. A distinct, out of the box, oak, vanilla twist to a DiPA. Nothing grand, but leaves it's mark.
Feel - easy drinking DIPA; nicely done!
Overall - there's potential here, but not next level...yet!

Light caramel color, lacing was extravagant. I consumed this in my Duchess beer/wine glass and when the beer was gone, a blanket of lace covered every inch of the inside surface. I am seriously tempted to upload the pic and post a link. Rivaled by none, equaled by few. Very, very smooth drink, very mellow with candied bitter citrus fruits crusted with white and brown sugar. Lots of caramel and lots of hops although this is balanced almost perfectly. Mouthfeel is heavy, thick and smooth with understated carbonation. Very impressive from a brewery I have not been very impressed with up until this point.

This iIPA poured into a snifter delivers a dark orange body with lots of bubbles streaming inside it and a full fluffy off-white head that leaves nice lacing. head dessipates fairly quickly.

The nose is of wonderful Orange zest and aromatic hops. ethyl alcohol is barely visible on the scent.

A very drinkable and enjoyable treat.

S- it's official... I can pick out Nelson Sauvin in a beer. That was the first thing I said when I took a whiff, and sure enough it was mentioned in the description. smells like Grand Marnier, almonds, marzipan, white wine. very intricate, yet one dimensional, as these are all aromas produced by the hops. The aroma is mouth watering, really.

T- There's hops in it...
For the most part, the taste mirrors the smell, but with further subtle intricacies. I get hints of pomegranate on the tail end, toasted malt, almost quinine-like bitter notes, lemongrass and ginger. This is a really layered beer

M- this beer hides its ABV remarkably well. you simply can't tell that you are drinking a 9.0 % alcohol beer. The body is thin, but the flavors linger and evolve long after each sip.

O- While I don't think that this is a groundbreaking DIPA, it is a world class example. My only gripe is the $8 price tag that I paid (at a store that is known for marking up a bit high). At a good price, I would buy this again.... but only if Pliny wasn't available.

Quite sweet, but a malty rather than a sugary sweetness. It goes well with the huge fruit flavors. Mango, apricot nectar. Rather tart after some sipping. A textbook example of the Nelson Sauvin flavor, but more bittering hops lurk in the background. However, the bitterness is way less than most big hop beers. It allows the spice and alcohol to give it a livelier taste.

One of the more drinkable DIPAs for my taste. Cheerful and fruity. From the 22 oz bottle bought at Ibis Market in San Diego.

Taste, hoppy, ample bitterness, doesn't weigh heavy in the mouthfeel. A little upbeat with ever so slight mint feel to it. The most complex and best Karl Strauss I've ever had I'm thinking at this point. . . by far. Melds dryness with stickiness and a great reperesentation of the Nelson hop. Kinda strange, I've had this and the Nelson for the first time within the last month, and the results are completely surprising, as I like the KS more than the Alpine (for once).

A great amount of drinkability for a beer this strong, very easy going down. I would recommend you drink this earlier in your night (order wise with other beers) as the Nelson hop is delicate, but here, it is strong, but I just think the Nelson hop needs to really shine a little warmer and earlier in the evening.

$6 a bomber and well worth it. Easily the best thing ever from Karl Strauss.

Bottle into my pint glass.

Quite dark honey/amber/orange in color. Very Clear. Monstorous 2 and half finger slightly off white head. Head retention is fantastic (about a one finger head remains) with very nice lacing hanging around.

Very drinkable DIPA. Gotta tip my hat to Mr. Strauss on this one. I tried red trolley ale once, and pretty much wrote the brewery off as another "micro" with a tendency to try to appeal to the masses. This one is ready to satisfy the most discerning beer drinkers though.

This extremely smooth and drinkable DIPA was enjoyed out of a 22oz bomber as the last beer at the end of a DIPA session.

The appearance looks like a typical DIPA, but one taste told me that this is a big-league hoppy brew. This beer bursts with IBUs but is still one of the smoothest DIPAs I've had.

At 9%ABV its dangerously drinkable. I put it in my top 5 DIPAs with Pliny the Elder, Green Flash Imperial, Left Coast Hop Juice and Ruination

S - A musty orange smell with grassy hops. Not overwhelmingly bitter nose but the sweet malt is picked up

D - A good drinker, interesting blend of hops. Wouldn't say it's in the 'upper class' of DIPAs but good on its own.

A - Darker amber color with finger of white head.

M - Mouthfeel is above average with good carbonation and nicely balanced.

I will be going out to buy another is a week or so.

Poured from a bomber into a pint glass. The beer is a hazy orange, amber color with three fingers of off white foam. The head stays on this one, dissipating to one finger that remains as I drink. The hop aroma is instantly apparent, strong citrus notes, grapefruit, orange, very nice. Pine is largely absent, but that's ok, this beer smells great as is! The malt makes it's presence known at first sip. Sweet caramel, followed by a tounge punch of bittering hops. This beer gets better with every drink. Hops hang around making the finish dry and bitter. Mouthfeel is right on for the style, carbonation is not overpowering. ABV is well masked, making this a very drinkable beer for me. An excellent DIPA offering from Karl Strauss. Reccommended!

Cask service via hand-pump into a long-stemmed tulip glass at the Costa Mesa Karl Strauss pub.

A: Clear, medium amber color with orange highlights and one finger of persistent white foam head. Slight lacing remains on the glass.

S: Sweet tropical fruit is foremost, alongside lesser grapefruit citrus notes, in a smell that is luscious but not particularly complex. No alcohol is present in the smell.

T: All that is promised in the smell is delivered here as the taste begins with abundant, sweet tropical fruit. A hint of graininess emerges in the middle but is never featured over the tropical fruit qualities. As the finish approaches the fruit flavors turn vinous and are joined by moderate bitterness. Some booziness is detected as the finish sets in.

M: Medium viscosity is slightly sticky on the palate, but without the syrupy quality suggested by the other senses. Carbonation is light and does not distract from the overall sensory experience.

D: Cask service enhances this already-worthy beer. Its high alcohol content is mid-range for the style, but still extreme enough to limit enjoyment. Hop cultivars featured here may stray from the west-coast norms, with the end result being similar in some respects to Oskar Blues Gubna. This beer may arguably be Karl Strauss' most important contribution to the beer world.

T - honeycomb sweetness up front with a hint of grainy cereal. Sweet pineapple fruit character and grapefruit rind in the center. Soft floral ad well. Hints of alcohol on the backend.

O - nice beer. A bit sweet for me but it was still enjoyable.

T. heavy on the malt twinge, was hoping for more hop presence but more of bitter with oxidization then with hops and something is weird and yogurt-like in the backbone.

M. all over the place, not sure what's going on here, needs more balance

O. Disappointed, more of a poorly done 90minute ipa then something special.