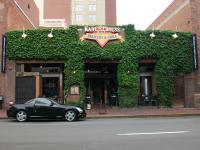 View: Place Reviews
Reviews: 31 | Ratings: 58 | Log in to view all ratings and sort
Reviews by TheLongBeachBum:

The 5th of the stops on a recent San Diego Pub-Crawl by a small, but highly select (even if I say so myself), bunch of So. Cal. BAs. As we headed downtown from the Princess Pub & Grill, we hit this place. I had actually been here many, many years ago, and the memories flooded back. I stayed in San Diego for a weekend in 1995, whilst I spent 10 weeks working in the States. I quite enjoyed this place when I was last here, and although the surroundings have changed considerably (there seems to be construction work and new buildings everywhere these days it seems); the Karl Strauss appears to have changed little.

An imposing frontage, which is hard to miss, quality fittings abound inside. The Bar is to your right as you enter, with some tall seating in front of the bar, and more expansive restaurant seating on a various raised levels taking up the rest of the floor space. I get the impression, as I did in 1995, that this place is really orientated around the food crowd. However, it was rather quiet on our visit, so we were quiet lucky and enjoyed a few beers.

A small group of us elected to sit at the Bar, and the Bartender was very friendly and even helped to explain each of the offerings that they had on Tap. Service was good and attentive.

The beer range on tap was varied, but served a little too cold for my liking, but it soon warmed so it was no big deal really. I tried a couple of the beers, the most memorable of which was the Blacks Beach Extra Dark, an above average offering that was rather drinkable and a bit of a quaffer at just 4.4%ABV.

We gave the food a miss and basically elected to stay sat at the Bar and enjoy our Beer as well as each others company, which was becoming rather hilarious as time and the effects of the several pitchers of the Oak-Aged Stone Arrogant Bastard that we had sampled earlier in the day started to take hold.

I rather like the Karl Strauss for some reason, not sure why, it is not a bad place at all. Sure, it has the Karl Strauss corporate lines akin to those of the Rock Bottom, but I felt as though this place had a little more character and individuality about it. It most certainly had a more adventurous beer range in both style and flavor than the RB and out of the two downtown chains, I much preferred Karl Strauss.

It was quite expensive from memory, but certainly worth a visit if you are in the area.

Location in the downtown area. Always have a Brewer's Choice and a barrel aged tap option. Also saw they do a cask on Thursdays. Went with a flight that had the peanut butter cup porter and the Oktoberfest. Food was good (I recommend the west coast carbonara).

Bonnie was a great bartender

Decent atmosphere, friendly bar tender and flights of beer. Food looked good. Not the most amazing beer selection as they had only Karl Strauss offerings.

This place was the first San Diego brewery we went to. Vibe was so-so the servers were pretty damn good. Worth the trip

A must visit if you are in Gas Lamp area.

I forgot this place was only a few blocks from the Sante Fe Depot. It was perfect to grab a few tasters before jumping on the train back home.

It was a Friday evening, so it was packed, a good sign. The atmosphere was inviting. Bartenders and servers were all friendly. I sat at the bar to grab a series of tasters. I had a nice chat with a fellow from back East visiting San Diego to watch the Patriots/Chargers game with buddies he hasn't seen in over 20 years. That was cool.

I didn't order any food, but it looked pretty good. The beers were good, nothing earth-shattering but solid. My favorite of the night was Five Wee, a scotch ale. Very nice.

I'll surely return in the future, and make my rotation of places to hit before hopping on the train.

Seems primarily a restaurant with good beer selection. Convenient to downtown. The food is better than a lot of brew pub places and atmosphere is upscale casual. Tried the chili, fish tacos, and the squid and ahi poke appetizers and they were all excellent. Service is very good and servers knew about the beer offering, which was about 10 beers on tap as well as some bottles. Also fill growlers. Tired the Belgian IPA, Octoberfest, Red Trolley ale and one other that I can't recall and they were all nice. Most main dishes were in the $15 range so figure $25-30 with a few beers.

Upon entering you first notice the lighter shades of woods, yellow walls, and plenty of tables and 1/2 booths. There are a few tables outside too. The bar overlooks some of the brewing tanks. Big open wood ceiling give this a bit of an airy feel.

There were about 10 house beers on draft with some beers available in bombers. I had numerous beers over a few stops here and the ranged from OK to really good. One of the older places in San Diego, and it is worthy of a stop.