The Cellar at Duckworth's 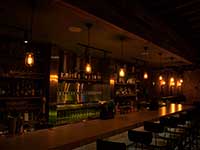 View: Place Reviews
Reviews: 6 | Ratings: 10 | Log in to view all ratings and sort
Reviews by BLebowski:

90-plus taps. Sitting down where is like taking a brewery tour of North Carolina without getting out of your seat.
Monday is $3.50 pint night for most anything on tap.
Great choice, if you, like me, was in town for a conference and didn't have time to wander afar.

Vibe - nice, tight, dark place - limited seating, go early or get a reservation
Quality - mixed drinks are more of a focus here even though they have a whale cellar and some stuff you can't get upstairs
Service - we sat at the bar and had excellent service - bartenders all very friendly, informative
Selection - whale cellar, 6 or more on tap
Food- pretty good, truffle mac and cheese is very good, good steak

Perfect place for an expense account night as it's $$$

Absolutely top-notch place. Food & drink was exceptional and many of the other posts already spoke to that.

What I loved was that you can buy cellar items to-go. Bought many beers Id always wanted that dont distro to my home state.

This place is outstanding. Was in Charlotte for a week and visited this establishment twice (one a Tuesday and Thursday night). The other two reviewers described the place well, but this is almost the type of place that you don't want that many people to know about...enough to keep it going, but not too many so that it gets crowded and loud (which it did on the Thursday night that I visited). The bartenders were great, very friendly and chatty. The beer menu, both on tap and in bottles was really good, but in my opinion, you need to go for the cocktails. Some of the best that I have ever had...the Smoked Sour is amazing (I know this is a beer forum, but you need to know this). Next time that I am in Charlotte, I will be back.

The Cellar at Duckworth's is exactly what one would expect from a World Class Beer Bar. They have the absolute best tap selection in not just Charlotte but North Carolina. Every beer is well thought out and the variety of styles that are on tap at any given time offer something for whatever mood I am in. I have tried 1000's of different beers in my travels and everytime I go to The Cellar, at least half of the 20 taps are beers that I have never had.

The menu is INCREDIBLY invenitve, modern, exciting, and well thought out. Every meal I have had there has represented the best meals I have ever had in Charlotte. The bottles of beer available in the bottle cellar represent the best and most rare beers available in the state.

The staff are some of the most professional and informed people in the business. Charles, always makes a point to stop by the table to make sure we are having a good time. He also makes sure we are aware of the rare and special beers that are currently available. The mixologist has put together a stellar line-up of innovative, mouthwatering cocktails. I am much more of a beer person than a mixed drink person and I find myself ordering a mixed drink everytime I visit.

This is the newly opened area to the uptown Duckworth's. Its located directly downstairs from the front entrance of the restaurant.

When you get down there, you're greeted by the hostess. When you head in, there's an awesome sliding door. The room is fairly small. I guess could seat 60? There is one booth and several tables with both bench and chair seating. There are a few small tables in the middle and then there are about 15 seats at the bar. The lighting is very low. Good acoustics leave only a slight buzz in conversation. basically I think they are going for the Speakeasy atmosphere.

Tap selection is upper echelon beers. The first time I was there it was for a Jester King 'dinner', so they had 6 bottles and one tap to choose from. I went back for dinner later in the week and they had a selection of sours, barrel aged stuff, etc. Lagunitas West-ified, Avery Raspberry Sour, Dormaal Grappa barreled blonde, etc. Nothing run of the mill.

The bartender was making some killer mixed drinks. Try the Flip...crazy good. They have about 50 bottles of wine and also had about 10-15 cans of beer (local stuff).

Then, there's the food. Not your typical Duckworth's bar fare. I split the Tomahawk ribeye and the Truffle Mac n' Cheese (yes, truffle MnC!). Both were frickin' amazing.

Any way, get here if you can. I will probably be there at the bar.


The Cellar at Duckworth's in Charlotte, NC
Place rating: 4.79 out of 5 with 10 ratings