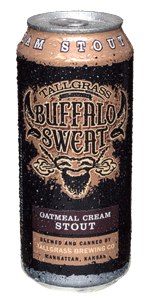 Notes: We love this beer here at the brewery, and think you will have one of those “I’ve never-tasted-a-beer-like-that” kind of moments when you try it!

What we really like about this beer is the smoothness that brewing with cream sugar brings to the palate. This smoothness balances out the copious quantities of roasted barley used in the brewing process to create a rich, complex, and delicious beer. If you have not been a stout drinker in the past, give this beer a try. It might just change your mind about how dark beers should taste. It tastes so rich, but is surprisingly easy to drink!

Bottom of can said drink by 7/29/18, so it is well past its date. Pours a pitch black color with a thick foamy head. Head retention is mild. Lacing is good. Aroma of slightly roasted malts, oatmeal and coffee. Very light on the taste but still pleasing. The roasted malts stick out more. Some coffee bitterness on the end. There is also a little sweeter oatmeal.

This beer literally burned my mouth. It tingled my jaw in a way that I didn't know was possible until I took a swig of this.

It looks really nice and smooth. It has a great color like a rich dark chocolate. But appearance is the only thing it has going for it in my opinion.

The smell made my nose crinkle and my stomach churn. The taste made me gag. And the feel, well let's just say I would rather be tazed than have to drink this beer again. That tingling in my mouth still won't go away.

Overall, this beer is Not for me. I tried it. I did not like it. I am thankful I never have to taste it again. For all of you out there who like this stuff, more power to ya because y'all have mouths and stomachs of steel.

Poured from can to snifter glass. Look is black with nice 1 inch head of foam, takes over 30 seconds to come down to a quarter inch. Smell is malty. Taste is sweet and a bit chocolaty and vanilla with mild alcohol taste. Feel is light but taste lingers. Overall a pretty good sweet stout.

Pours a dark brown color with a foamy tan head that lasts quite a while. Aroma is cocoa and oats. Tastes of cocoa and coffee. Smooth and creamy. Good mouth feel.

L- Huge tan head. Dark, dark, brown color.
S-Immediate oatmeal, coffee, chocolate and nougat. Roasted malts and oats.
T- Slightly sweet, extremely creamy oatmeal flavor, chocolate undertone, roasts nougat flavor, slight bitter bite. It's under-toned in the best way. Very refreshing and rewarding with each sip.
F- Surprisingly light and fresh.
O-Exceptional milk stout. Think it might be the best I've had in a long time. Absolutely delicious. There isn't a single mistake with this beer. If you're a connoisseur you'll enjoy this beer, if you're a beginner you'll enjoy this beer too.

Surprisingly balanced, smooth stout that wasn’t as sweet as I expected. Nice dark brown color with some lingering head and lacing. Smells of coffee, caramel and malt. Tastes of nice roast coffee, caramel, vanilla, grain, malt, toffee and a little oatmeal. Smooth mouthfeel and not bitter at all. Decent carbonation. Slightly dry and not too sweet, which is very refreshing as I usually associate this type of flavor profile with the sweeter, heavier stouts.

Pours black with a beige head that dissipates quickly. Tastes mainly of roasted malt. Not as sweet or smooth as I might expect, and rather thin for a stout.

Pours up to a two finger tan head that falls to a thin ring but regenerates easily and leaves bits of lace on the glass. Very dark brown color--nearly opaque. Aroma is roasted malt, coffee and toffee. Flavor is roasty yet smooth and tangy, not necessarily sweet. There is an acidic twang that counterweights the residual sugars. Mouthfeel is medium and creamy due to restrained carbonation. Overall this is a well played crisp, dry hybrid version of the popular oatmeal and cream stout styles.

Bought a 6'er of cans of this on a whim, never having had it before, but new to the area. Pours out to a near black, forming a modest dark tan head with poor retention and good lacing. The nose is quite nice, on the sweeter side, minimal hops, lots of dark chocolate, cocoa powder, dark roast coffee, chocolate syrup. Carb is about 2.5 or so. No off aromas. The mouthfeel is very very nice for a 5.0% abv beer, creamy, smooth, pleasant silkiness, and medium dense body. The taste is decent, but not as good as the nose. I'm not a fan of oatmeal in beers in general unless it's an big big stout which covers up the cardboardy taste, and it tastes here like a low attenuating british yeast and I'm no fan of most british yeasts, certainly every british yeast I've brewed with has been a total disappointment. There are nice chocolate and coffee notes, not overly roasted or acidic, a very nice roast profile. There is a lingering mineral character in addition to the cardboard and newspaper. Although not overpowing the beer, it's certainly a detractor. Minimal bitterness, good for the style, balanced by the lactose.

A nice oatmeal stout. While not a fan of the (what I suspect to be) british yeast and oatmeal cardboard notes, the mouthfeel, roast and chocolate/coffee note makes up for it. Recommended if you're an oatmeal stout fan.

It looks okay, a dark brown with a tan head but the head dwindled quickly and leaves no lacing. The smell is roasted malts with chocolate and oats. The taste is a very light stout with roasted malts and oats. The mouthfeel is very light and an easy drinker. Overall it's not terrible, it's more of a session beer, and something I'd enjoy if I was out on an all day drinker.