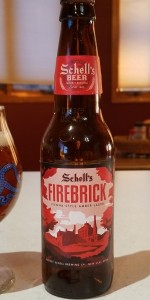 Notes: FireBrick was introduced in 1999, and is named after the bricks that line Schell's old boilers. It is the culmination of an effort to bridge the gap between the "popular-tasting" beers and the heartier, hand-crafted ones.
FireBrick is a refreshing all-malt lager with an amber-red hue that reflects the feeling of the brewery itself.

It has been described by Ted Marti as having a "subtle maltiness combined with a hint of hoppy taste that creates a mild, pleasantly drinkable beer." It is made with four specialty malts, along with Vanguard, Chinook and Hallertau hops.

Aroma: Aromas of grassy caramel, toffee, pine, and mild amount of phenolic sharpie which is reminiscent of a touch of red fruit. But not much hops here. Don't be fooled. Or malts for that matter. Mostly earthy caramel. A cream sweetness. Smells very English. (3.25)

Flavor: Mild flavor. Some faint caramel and bread. Earthy. A touch of tart raisin and red fruit. Finishes clean and dry. Again a bit of English, but even less on the tongue than the nose. Malty and no hops. (3.25)

Feel: Lighter bodied. Clean. Decent carbonation. Crisp enough, but allows the malts to come through without being too sweet. (3.75)

Overall: A very mild beer. I was a little more than disappointed with the flavor here. It's nice and clean, but the flavors are lacking. Some English and German flavors. Reminds me of a milder German Bock. Very much lighter than evena Boston Lager though. I don't know if I could peg this as a Vienna off the top of my head. It's pretty good, but nothing great. (Final Rating: 3.40)

Pours amber with plenty of foam that settles to a thin collar of bubbles. Smells of creamed corn and a hint of toffee. Straightforward barley malt flavor laced with a touch of toasted marshmallow sweetness. Balanced with just the tiniest hint of hop bitterness. Finishes a bit thin and sweet. Very drinkable despite the sweetness.

From a 12oz bottle. Copper color with white head. Smells of roasted malts and caramel. Medium feel. Roasted malt and caramel with some floral hops on the finish. A very good Vienna lager.

Poured from 12oz bottle into glass. Best by date stamped on bottle's neck is '030319'.
Pale amber colored beer, with a hint of red. One finger of off white head recedes to scattered islands and a ring. No real lacing left behind.
Aroma is slightly toasted malt and rich caramel. Slight fruity hops.
Taste is malty, with a caramel emphasis and a bit of nuttiness. Backed up by floral, spicy hops.
Medium mouth feel, and the touch is quite smooth. Okay carbonation.
Easy drinking lager with more aroma and taste than a macro lager.

Beautiful color saves this otherwise mediocre beer. It smells slightly malty with a metallic note to it, but mostly like clean lager. The taste is unfortunately nondescript. Very hard to pull any notes out besides a mild sweet maltiness.

Poured into a footed pilsner glass. Abundant caramel aroma, slightly smoky. Excellent appearance as it is poured directly to the bottom of the glass, with the very tall head rising from the bottom to a 2 inch slightly off-white to tan thick and creamy head that lingers, receding quite slowly while leaving a thick lacing. Golden amber with plenty of small rising bubbles. The pilsner glass shows off this beer to excellent effect. Very flavorful, dominated by the caramel malts with smoky hints. Smooth and moderate (not thin at all) feel. Slightly bitter on the initial taste, moderating in the middle, leading to some bitterness in the aftertaste, but the malts remain throughout. (Based on some of the reviews, the hops were better represented than I was anticipating.) Well balanced. Recommended for those looking for a well-done American-brewed Vienna-style lager.

Look: Clear, rather light-looking amber with a fluffy, off-white head.

Taste: More of the smokiness, along with subtle, sort of earthy malts and hints of hops throughout. Leaves a kind of sourdough aftertaste.

Copper color with a tan head. Herbal hop smell, tannin also. Taste sweet smoky with a tannin finish. This is the measuring stick for all Vienna layers in my book.

This beer pours a very clear amber color. The head was slightly off white, frothy, 1 finger. The retention is average, and there's minimal lacing on the glass.
The nose has a slight smoke to the malty aroma.
Taste - This is where this beer shines. There's a slight smoke flavor, that lingers. I also get some sweetness in there as well. Not too much in the hop department.
Feel - decent. Not really watery, but not thick either.
Solid beer from Schell's. I do recommend this one. It is easy drinking with a great flavor.

Poured from 12-ounce bottle into a vintage Vasold Pilsener glass. There isn't much to complain about as far as appearance is concerned. The clear, deep-copper colored body rests beneath a thick, long-lasting eggshell-white head that leaves scads of lacing as it creeps down the side of the glass. Big aromas and flavors of caramel, dark bread, and spicy hops, with a bit of fruity tartness and a little alcohol heat coming through as the beer warms. Medium mouthfeel, on the silky side, with a peppery and spicy bitterness on the finish. Not getting the lack of love for this because it is one fine Vienna lager.

Aroma has some roasted malt notes, bread, caramel, and a touch of biscuit.

Taste is very malt forward as you'd expect. Notes of caramel malt, dark fresh bread, with some slight sweetness in noted throughout through. Floral hops throughout are certainly present in the palate with a hint of bitterness on the finish.

Feel is medium to full bodied coating the mouth and lingering on the tongue. Moderate vibrant carbonation. Smooth finish.

Overall this is an outstanding Vienna lager - particularly for an American made one.

Pours a copper amber hue. Slight malty caramel smell. The Vienna Malt steals the show with a bit floral and bready biscuity flavor. The hops are subtle and overall this is well balanced. All schells beers seem to be very drinkable and this is no exception. Good example of an underrated style.

Dark copper good head retention. Smell is sweet malt, slightly floral and bright. Taste is slightly metallic, good summer beer if you wanted something with a bit more body. Would also be great in the fall around a fire

I poured a 12 oz. bottle into a clear wide-mouth beer glass. It pours an attractive amber red. The taste is an awesome mix of malt and subtle hops. Love it!

Taste is malt forward with emphasis on the roastier aspects of the malt. There is a definite undercurrent of roast flavor that while not bitter is on the darker end of the flavor spectrum. Hops are there more as a balancing offset to the malt fullness. No real apparent sweetness yet the brew isn't entirely dry.

A well made, clean, refreshing Amber of the heavier sort.

12 oz bottle poured into a pint glass. Clear, dark amber color with a tan 2-finger head. I was really surprised at how smooth and refreshing this one tasted. Perfect combination of maltiness and hops. Can't wait to have another.

Appearance: Pours a lovely, bright, crystal-clear burnished copper, and forms about a finger or so of fluffy, vaguely off-white but just barely, head. Bubbles stream up continuously from the bottom. Lacing is insanely good, draping the sides of the glass in walls of tightly-packed bubbles with occasional holes and ridges.

Taste: The floral aroma is definitely present in the flavor, from start to finish, though not significantly enough to trigger my Wall-O-Hops-And-Nothing-Else response - which means for non-supertasters, it's probably just this side of "detectable". Rolling along beneath and around the florality comes the dark bread and biscuit, which taste like they want to be sweet (and likely would be for someone other than me). Toffee is present as well, around the edges, and there's some mild, faint tinge of raisin frolicking about in the distance. The aftertaste lingers as flowers and bread, like a blooming vase left on a kitchen table strewn with crumbs where a loaf was just devoured.

Mouthfeel: Fairly light in body with a good deal of sparkly carbonation, with no watery breakdown at any point during the drinking process.

Overall: That's a damned good Vienna lager - up there near Eliot Ness. I'll be tracking this down again.

Taste was roasted malt more than expected, but pulled off smoothly. A little heavier than a Vienna Lager, this one goes into Oktoberfest territory.

Look: Dark copper-amber with about two fingers of off-white head that settles to a film with a smidge of lacing.
Smell: Caramelly bready, softly fruity (apples? pears?)
Taste: Taste mirrors the nose. Soft, round flavors. Lightly sweet and malty with a balancing herbal bitterness in the finish.
Feel: Light to medium body, moderate carbonation but smooth.

Overall: Firebrick must have been one of the first "craft" beers I tried when I came of age. I remember liking it then, and I like it now. It has a very nice round, aromatic maltiness that is lightly sweet but not cloying, and great balance in the finish. Compared to the Great Lakes Eliot Ness, which I also really like, I feel like the Schell's is a bit mellower in flavor with more bitterness in the finish. Consistent with its lower ABV (5% vs. 6.2%) it is more sessionable than the Eliot Ness.

This is the best Vienna style beer out there for sure... Try it and tell me I'm wrong?... Go and get any other Vienna style beer and compare it to this one and see how it play's out... This Firebrick will beat any other beer on the market in it's class. It's just wonderful!... It's maltiness combined with a hint of hoppy taste that creates a mild-Best craft Vienna beer with a peppery spice, and some dark fruit notes to play with the heavy, toasted malt... Cheers for sure!

sometimes you read the description from the brewer and wonder if they switched labels. this one's pretty spot on:

"subtle maltiness combined with a hint of hoppy taste that creates a mild, pleasantly drinkable beer" - pretty much. smells clean and malty. tastes the same. nothing hanging around afterwards, no untoward or unusual flavors, just simple and easy to quaff.

i'd never think that i need to get some firebrick, but it's the kind of thing that you go back to every once in a while and think "that's a damn fine beer".

This beer pours a light brown with a moderate head. The aromas are straight up toasty malt. The flavor is more complex, bringing a peppery spice, and some dark fruit notes to play with the heavy, toasted malt. The mouthfeel is light ad refreshing. Overall this is a delicious beer, and excellent in style.