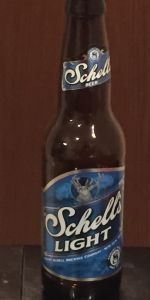 Notes: You can't deny the popularity of light beers today. You can create one that's more substantial and more flavorful than the competition.

Schell's Light is an American lager with a golden color, light body and a refreshingly crisp dry finish. Brewed with 85 percent malted barley, it has a much fuller flavor than other light beer. 100 calories, 7 grams carbohydrates, 0.7 grams protein, 0 grams fat.

Reviewed by gatornation from Minnesota

Rated by Jugs_McGhee from Texas

Reviewed by baldusl from Minnesota

4.24/5  rDev +40.4%
look: 4.5 | smell: 3 | taste: 4.75 | feel: 4.5 | overall: 4.5
If you are looking for a light beer, you have already accepted that you will compromise some flavor. However, this is the light beer for a beer drinker. Full, malty lager taste without the dramatic compromise you experience with other light beers. Crisp, pleasing finish when served cold. By far the best light beer I have had.
Jun 03, 2017
Rated: 3 by Beer4Mike from Minnesota

Reviewed by jakemn91 from New Mexico

Reviewed by vette2006c5r from Minnesota

Reviewed by mikesgroove from South Carolina

2.53/5  rDev -16.2%
look: 3 | smell: 2.5 | taste: 2.5 | feel: 2.5 | overall: 2.5
amber with a small white head. Lots of visible carbonation and very clear consistency. At least the tone has a decent reddish tint. Smell was full of grains and not really much else, slight hint at a caramel or sugar sweetness but very slight and only as it warmed. The taste was a little musty. Grain, corn, and grass flavors were the big players here, slight amount of caramel trying to come through but never really made it. The feel was very smooth, decent body, not as light as some others. Overall it had a bit more of a flavor profile then some of the others did, but still needs a little work
Dec 04, 2011
Rated: 2 by thisladyluck from Iowa

Dang, but this is fresh! The code on the bottom has it as 11/25/10 and my man Chaz is right - the cobalt (CO) blue color of the CAN jumps out at me amidst all of the other CANs in my reefer awaiting the Crack and Glug.

It is onomatopoetic, but the Crack and Glug is one of the primary things that I have missed during my hiatus. I have turned into an audiophilic beer hound and my attempts to lean over the bar to listen to the beer flow from the tap into my glass have been disastrous. Sheewhack, but I haven't caught a baseball bat across the cranium in close to twenty years, following our return from Gulf War I and a night of liberty with the Gunners Mates and LT Mean Gene, but one of my servers recently caught me leaning in and ...

Ooh, this is one of Greg Koch's infamous "fizzy yellow beers" and I am all for it. I got just over a finger of bubbly, fizzy bone-white head that fizzled its way out of existence. Color was a pale lemon-yellow with NE-quality clarity. I have made water that was darker than this (although my kidneys and liver may be failing following last Sunday's malt likker marathon). Nose had the familiar scent of silage, like my jokes - very corny. CAN't have it all, I suppose. Mouthfeel was thin with a heavy presence of carbonic effervescence and a taste of watery corn, like a cheap CAN of corn. Oof. Well, the CAN itself sure was purty. Finish left me hankering for a better CAN, just like a better tomorrow. NOT a CANdidate for the cooler, however.

Reviewed by Chaz from Minnesota

Semi-sweet and somewhat tangy on the first sip, there's a mostly-pleasing malt quality shining through this one, though it is hardly a hearty or "malt-driven" beer. Neither is it a hoppy thing; whatever hop use is present has been thoroughly buried by corny goodness.

Rather fizzy and light-bodied, the mouthfeel here almost doesn't register as beer! It's more like carbonated water. Still, there is some character to this one, and perhaps it's in its overall inoffensiveness that this beer truly shines.

Better than average drinkability for what there is, but again (as with Deer Brand) I'm averaging the better of the the latter two elements of the rating system here, in order to bring both into the realm of the average Craft Beer Drinker's reality.

Schell's Light has slightly more character than the infamous Leinenkugel's Light, along with slightly less (of the wrong kind of) character than some of the cheap and nasty cut-rate brands out there, it also rates higher than Grain Belt Premium Light. Also, it comes in a snazzy blue can to boot -- what's not to love?

Reviewed by ZAP from Minnesota

S-More of an aroma than most light beers. Fruity and cidery smelling (apples/pears)...some light malt as well..

T-Light flavors of apples and pears.

D-Looks the part but tastes more ale like than lager like. Depends on what you want in a light beer. This has more flavor than most but perhaps not the flavor you'd expect with the fruity notes..

Aroma: A very simple beer. Hops are very faint, grain aroma, and for some reason I get a hint fruit notes from this beer.

Taste: Hmm, I have to admit this tastes better than the regular light lagers. It seems to have more flavor to it. It has the same elements, dull hops, grain, but it is a little more full bodied.

Overall, compared to other light lagers, I'd choose this one. It is more complex and is somewhat enjoyable to drink. I dig it for what it is. Very drinkable.

Reviewed by KarlHungus from Minnesota

3.44/5  rDev +13.9%
look: 2.5 | smell: 3.5 | taste: 3.5 | feel: 3.5 | overall: 3.5
This beer pours a clear extra pale straw color. The head is a quarter inch in height, and vanishes into nothing within seconds. The aroma is of toasty caramel malt, and is quite vibrant for the style. The taste is along the same lines. It's not complex or bold, but it is a lot of flavor for a light lager. The mouthfeel is light bodied with lively carbonation. I like how it isn't overly carbonated like most beers in its style. Overall, this is a good light lager that I could drink again on a hot summer day.
Apr 19, 2009

Reviewed by BuckeyeNation from Iowa

2.55/5  rDev -15.6%
look: 2.5 | smell: 2.5 | taste: 2.5 | feel: 2 | overall: 3
This review is part of Macro Smackdown XXI, the twenty-first Super Bowl-caliber competition between macro lagers and light lagers that began way back in November '04. This one should be more interesting than most given the differences between these two beers. Interesting is the most I can hope for because there have few pleasant surprises along the way. Will today be different?

Schell Light is the more typical pale straw topped by a few fingers of bone white. The head falls to a thick film by the two minute mark and leaves the glass almost completely untouched. Is the lead already too big to overcome?

This aroma is the winner because I can actually smell something when I put my nose over the glass. It's primarily fruity (apples?) with a modest amount of hoppiness. I would never have guessed Cascade and Cluster, though. Very few hops are present, that much is certain.

This isn't a bad light beer when all is said and done. At least it provides its drinker with some amount of flavor. Slightly crisp apples are still present, although I'm still searching in vain for the citrus fruit qualities that the Cascade hops should be providing. Underlying all is a corny sweetness that come from using 80% barley malt and 20% corn.

The mouthfeel is par for the light lager course. It's... uh... light. The good thing is that it's also nicely carbonated, with neither too few nor too many bubbles. Nevertheless, Ultra Amber is the clear winner here.

Schell Light is pretty good stuff if you absolutely, positively feel the need to drink light beer. It has enough character to keep me engaged until the final swallow and is one of the few light lagers that I'd consider drinking again. Notice that I didn't say 'buying again'.

Reviewed by garymuchow from Minnesota

Reviewed by TastyTaste from Minnesota