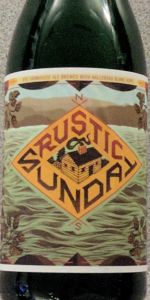 Beer poured golden with a beautiful white head that has some great hang time.

Nose is a nice array, green grapes, must, and barnyard funk are front and center, very nice.

Taste is outstanding! Spicy rye malt base combines nicely with the brett yeast lending a funky rustic barnyard flavor to the base beer with the near perfect complement with the hallertau blanc grapes that beautifully balance the brew out. Finishes with the white wine dryness.

Mouthfeel is superb, light bodied and refreshing with every sip. So smooth too!

Overall it has to be one of the best Saison's i have had from an American brewer and i love Boulevard Saisons!

16 oz. can. Cloudy orange with a brief white head. Smells of Brett, stone fruit, strong funky yeast. Tastes of stone fruit cut quickly by earthy brett. The yeast is lightly tart but extremely funky. Like a little too funky and weird. Hard to put my finger on it. White grape lingers in the finish. Medium body. It's ok, but the yeast is a little much for me.

Very nice example of the rustic saison very good earthy funkiness in both smell and taste. The rye gives a smooth effect to the tartness. Overall, a very pleasant beer to drink.

Poured from a bottle purchased at the brewery into a tulip glass. Bright cloudy yellow color with good initial head and nice curtain lacing. The rustic tartness plays very well with this beer. Wish I had purchased more!

Smell: Minerals & well water. Straw / hay with clover honey in malt profile. Over-ripened fruity yeast. with a hint of pepper spice and a hint of clove. Hint of light and tart citrus.

Taste: Slightly sweet malt profile consisting of honey and straw. Light barnyard funk and lightly tart lemons and white wine. Clean and crisp well water with a heavy mineral presence. Light pepper note with a near perfect rye note that just adds a lovely complexity to the beer. Fruity yeast with a hint of pepper. So much complexity found in this saison.

Mouthfeel: light bodied saison with moderate carbonation levels. Has a light dry finish. Its crisp. Its refreshing. Its clean. Highly drinkable. You would not believe this is a 7% saison; it drinks like a table beer.

Overall: This is what Saison Dupont would taste like if it was brewed with rye. This is very nice. How can an American brewery craft a truly authentic Belgian saison? It hits all the right notes. Its authentic as a Belgian saison gets. The rye is on point and blends well with all the saison flavors. Anyone who enjoys a well done saison needs to try this beer its highly impressive example that would make any saison aficionado very happy with just a sip.

amazing beer, huge thanks to my buddy for shipping this one out, along with a bunch of other goodies from these guys and this part of the world. its a blended rye saison dry hopped liberally with hallertau blanc, funky and definitely rustic, but not particularly sour, exactly the type of saison i like to drink, and just a wonderful example of it. its lightly colored, straw toned and just lightly hazy at the bottom of the bottle, expressive white head rising up and fading slowly, gorgeous and delicate looking. aroma is white grape, green gooseberries, and subtle ripe pear, some mouthwatering citrus too. the fermentation profile is stunning here, smelling a little more sour than it tastes, more bretty and wild to me, well developed but with a fresh fruitiness, and with some familiar old world saison character too, a mixed fermentation thing i would think, i love the farmhouse character this has. the hops make it kind of modern in the taste, juicy in a mellow way, herbal and vinous, light melon notes, lemongrass, and gentle oak tannins pushing through. the rye can be tasted and appreciated too, earthy and grounding, this has great balance between the malt, the hops, and the yeasts. its shockingly flavorful but also as drinkable as they come, each sip explodes with carbonation, fresh hop character, and mature musty funky yeast, its the best of both worlds, and the overall quality is wonderful. this is special beer, one i wish i could drink every day. dry and lively, fermentation forward, old worldy but distinct with these hops, warms up well, and is a joy to drink. massive thanks to my homie for shipping this out west for me, its amazing!

Sample at the Sour Beer fest in Boston on 6/15/2019
Fruity earthy some cereal grainy maltiness tart.

A delightful Saison. Combines a funky sour flavor with hops and a titch of rye to create a tasty variation that is both creative and traditional. Worth seeking out.

See @BEERchitect review - almost dead on what I got. I just wasn’t as fond of the tart aspects of the brew, rating-wise.

Spoit bottle with Martin at CK.

A: Pours with a frothy, three finger head, that has decent retention and nice lacing, with a hazy yellow body.
S: has an earthy, dry aroma, with hints of funk and touches of pear and pepper, and some white grape, quite fragrant.
T: hints of lemon, and earthy flavors, good spice and funk with some requisite dankness and a (slight) malt sweetness. The rye gives this a graininess that I rather enjoy, and a underlying astringency as well. This beer is slightly tart, but nowhere near sour. As the beer sits though, the hallertau blanc hops really come alive, leaving an effervescent white grape character coating the tongue.
M: Dry as hell, well done, just under medium body.
O: A very good beer, reminds me a bit of Arthur from Hill Farmstead, it does have a pleasant white grape aftertaste. If you like your farmhouse ales on the sour end, this is not really for you, but if you like them somewhere in between a saison dupont and a Fantome, this should do the trick. It's truly a well done beer, but for some reason I don't love it, can't really put my finger on why. Nevertheless there is immaculate brewing skill and refined taste on display here, and that should be commended.

ADDITIONAL THOUGHT: after sitting with this beer some more my opinion is only heightened, this is an excellent farmhouse ale from start to finish that is as pleasant from the first sip as it is the last. Seek it out if you love this style like I do.

Both rustic and refined, the illusive taste that is authentic to the most traditional saisons come way of rye, new German hops and a mindset that's straight out of the Belgian farmhouses.

Birds Fly South's Rustic Sunday (Rye Saison) pours a pale goldenrod with faint specks of yeast to follow. Its billowing ecru froth carries a honeycomb structure and the faint must of wine rot, straw, biscuit, spice and citrus. Pale grains hit the front of the tongue with biscuit, honey and the ancient grit of husken rye.

As the flavors develop rapidly on the middle palate, its sweetness proves to be fast fleeting and the rustic graininess of malt remains. Lightly toasty, its soft savoriness highlights the rye grain for a spiciness that registers early and often on the palate. A followup of lemon, under ripened orange, green apple and pear balances with a piquant spiciness of peppercorn, cumin, white pepper and weathered woods. Lightly vinous, its tangy and bitter finish is moderate trails like white wine, hay and cork as the aftertaste awaits.

Medium light on the palate, the beer's expressive carbonation pulls the ale from the tongue and forces a fast gulping action where most of the beer's complexities are most enjoyed in aftertaste. This gives the beer its superior drinkability and ease of consumption on the stomach. Arid, peppery and dry, the beer's aftertaste is spicy with white wine, rye spice and echoes of damp burlap and leathery citrus.

A: The beer is hazy yellow in color. It poured with a two finger high bright white head that has very good retention properties and consistently left a short head covering the surface.
S: Moderate aromas of yeast are present in the nose.
T: The taste follows the smell and has lots of flavors of yeast along with hints of spice from the rye and bits of lemons.
M: It feels light- to medium-bodied on the palate and has a moderate amount of carbonation.
O: The smell of this beer is dominated by yeast—it's only when you get to the taste when things become more complex.

Reviewed from notes. This bottle has been refrigerated (upright) for at least four weeks. When the top was popped, it was a complete gusher. I lost about one-third of the bottle to the counter. Eventually, it was able to be poured from the 750 mL bottle into an El Catador Barrel-Aged glass.

A: A hazy, yellow-gold beer with a big two-finger fluffy white head with great retention. And, unsurprisingly given the gushing, a ton of visible carbonation.

S: Funk and musty basement, barnyard and horse-blankety Brettanomyces. Biscuit malts with big of wheat notes (this might actually be the rye, given the label claims). Some spicy and herbal hops. This is nice and funky, and not one of those “sour saisons”.

M: Average body, and the alcohol is well-hidden. A whole lot of fizzy carbonation - more than this beer should have, and I find that it does detract from the experience.

O: I love the funk here, and the rye plays nicely with the hops selected. I suspect that this bottle underwent a significant secondary fermentation, and one that apparently wasn’t accounted for when it was carbonated. It certainly didn't taste infected or anything. After some agitating/stirring the beer in the glass, it drinks a little smoother and does get better. A solid saison, if you can get past the carbonation issue. The rye is a nice touch as well.

Scores given are for the bottle reviewed. I hope to revisit this one again someday.

A gusher when uncapped but when it finally settled down it was a beautiful, hazy, straw colored beer. The aroma is funk, mold, straw, banana, lemon and yeastiness. The taste is lightly sweet and funky with a dose of overripe bananas and tart lemon. This is a really tasty beer.

L: Poured from a bottle to a pint glass. Had a bright yellow color and a cloudy consistency. There was a small amount of foamy head that lasted an average amount of time. Good lacing.

S: A good aroma of yeast, spices, citrus, and a vinous quality.

T: Tasted of a light citrus quality (lemon, especially), Belgian-style yeast, spices (coriander, cloves), a bit of rye, some hops, the aforementioned vinous quality, and the saison barnyard funk. A solid, vibrant flavor on the whole. The advertised rye isn't as prevalent as I would have thought, but this isn't a bad thing; other ingredients make up for this. There is a slight tinge of skunkiness (product of a green bottle, I think), but it's a minor flaw.

O: An interesting take on the saison. Worth a look.